Throwing away any notion of a social contract and that “individualism is just all me, no we”  a handful of basically misinformed working-class protesters took to the streets to revolt, protest, tear down the “system” and basically any notion of their part in any social contract. Meanwhile, they were doing the work justifying the extreme right’s demands to change the government who is in their lives. Isn’t it a coincidence that Matthew Guy just became leader of the opposition and needed anti-Dan on the front pages?

More than one Trump-Pence flag was seen amid the crowd, along with a red MAGA cap or two. The disparate group of unionists, anti-vaxxers, anarchists, right wingers (including Proud Boys and neo-Nazis) and general troublemakers shut down parts of a city already crippled by COVID-19. Their agenda, apparently initially sparked by suspension of access to tea rooms and mandated vaccination due to viral spread in the construction sector, was hijacked. It morphed into a general protest against authority, targeted at lockdowns, government, police and even the construction union. 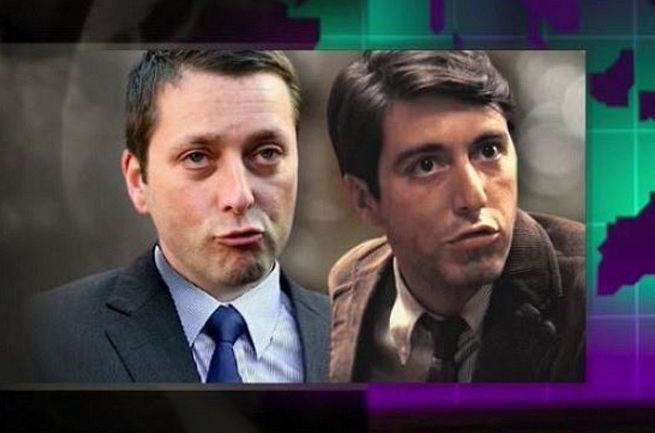 Written in 2018 prior to Guy losing 11 seats at the Victorian State Election and resigning from his leadership, this story will leave you wondering if he’s really the best Guy for the job.

“This state is on its knees, and the morons we get in this government blame everyone else!” The combative former Opposition leader is back. But what does he stand for?

Victorian opposition leader Matthew Guy has been caught up in a string of controversies involving Liberal party figures, donors or donations, notably in his time as planning minister in the Baillieu and Napthine governments between 2010 and 2014.

Matthew Guy paid out millions ‘to keep his job’

As planning minister, the Liberal Opposition Leader signed a multimillion-dollar settlement with taxpayers’ money to avoid a date in court.

Matthew Guy the man who wined and dined with the Mafia king pin of Melbourne, Did shonky land deals at Philip Island charged cash for access when planing Minister promises to investigate the ALP, and Daniel Andrews, Guy not only  sounds a thug and who has a record of questionable practices about him can hardly hold himself up as the standard bearer of political ethics.

1 $10,000 sash for access scandal for a meeting with a developer and Guy

‘They can hide but they can’t run’: Guy flags fresh inquiry into rorts Australian Values:  Remember when it used to be Simpson and his donkey now it’s Matthew Guy is a donkey

So, in Victoria, Matthew “The Family” Guy has announced that Victorian schools will be instructed to teach “Australian values” under a Liberal Government, as well as getting rid of all this trendy nonsense of teaching about sustainability, Asia and aboriginal history. Of course, Safe Schools goes because an Australian environment needs to be dangerous and there’s also going to be a greater concentration on “literacy, numeracy and writing.” Writing, of course, being a totally separate thing from literacy.

via Australian Values? What Can I Say? – » The Australian Independent Media Network Toxic groundwater will be investigated in the industrial area of Fishermans Bend – which is to be redeveloped as four new residential suburbs – almost three years after a secret state government report detailed soil and water-table contamination.

The report, kept confidential until recently, was completed just before the now Opposition Leader Matthew Guy announced the rezoning of the Fishermans Bend Urban Renewal Area.

The rezoning doubled or even tripled land values overnight, but failed to set aside infrastructure like parks  that could cost taxpayers hundreds of million of dollars.

An aerial view of the land that will form the new suburbs of Fishermans Bend.

Now, the Environment Protection Authority has launched an investigation into toxic groundwater across the massive site, used since the mid-1800s for some of Melbourne’s most intensive industrial activity.

Abbatoirs, rendering  works, bone mills, manure and glue factories, and soap and candle makers were all based in the area.

The EPA investigation comes ahead of new plans expected to be announced by the Andrews government for the Fishermans Bend area, which encompasses 240 hectares of Port Melbourne and South Melbourne.

The area was rezoned in July 2012 by Mr Guy as planning minister, from a mix of industrial and commercial uses, to a capital city zone that he controlled.

Mr Guy went on to approve 11 apartment towers – all taller  than 30 storeys – and to propose a new underground rail line through the area.

But in a sign of how rushed the plan was, the EPA has now commissioned a study to better understand the potential risk of contaminated groundwater.

It follows a preliminary land contamination study by engineers Golder Associates, completed in mid-2012, that used only “drive by” assessments of individual sites.

It warned of a variety of contaminants including heavy metals, petroleum waste, large quantities of solvents such as kerosene and turpentine, and acids from animal product processing.

There are a dozen outstanding permit applications for high-rise towers in the Fishermans Bend area.

No major residential project in the area has been approved since late last year.

Some planning applications, like those submitted for 60 Johnson Street in Port Melbourne, have been awaiting approval for two years.

The planning minister’s spokeswoman said there were many unresolved issues at Fishermans Bend.

She said the government was preparing its promised review of Fishermans Bend plans, to give greater certainty to residents, businesses and developers.

Helen Halliday is convenor of community group the Fishermans Bend Network. It has been lobbying for better and more transparent planning for the new suburb.

Ms Halliday said planning of the new suburb for 80,000 people had been a “developer’s paradise”, but that community input had been locked out.

“In 2012, we went from a draft vision that had a lot of good intentions … straight to high-rise podium developments, most in excess of 30 storeys, in areas that were designated for eight or 16 storeys,” she said.

She said the contamination identified in 2012 by the previous report didn’t seem to have been acted on despite many planning applications having been approved.

She said the Andrews government’s promised review would hopefully improve how the area was developed. “Nothing could be worse than what we’ve got, because it has been a developer driven planning process,” she said