Losing is “like psychic death for Trump”: Psychologists warn Trump may provoke violence after loss | Salon.com

Yesterday, the Associated Press and other major media outlets confirmed it: President Donald Trump lost his reelection bid. But unlike previous incumbent presidents who sought an additional term and were denied it by voters, Trump has made it clear that he is unwilling to accept the voters’ will.

Losing is “like psychic death for Trump”: Psychologists warn Trump may provoke violence after loss | Salon.com

My thought for the day The best one can say when looking for a reason as to why Trump lost is to say that he lied his way out of office. 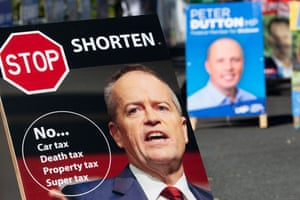 Labor’s chances were not sunk by self-funded retirees, but by the very voters who stood to benefit most from the ALP’s policies

A big, bold reform program requires voters to take some things on faith. Few outside those directly affected have the time or inclination to delve into the complex details of tax treatment of investment properties or to understand franking credit refunds. In this election, voters were asked to take Labor on trust that its policy plans would not take jobs and the economy down with them.

via Self-interest didn’t swing the election results, but the scare campaign did | Danielle Wood | Opinion | The Guardian

It has been 15 years since OIF, and there – in Iraq and Syria – US servicemen remain, wedged between Saudi-backed Sunni Islamists, and Iranian-backed Shia militiamen. Some 4500 American soldiers have already died, with upwards of 30,000 more wounded. And, like a bad sitcom, the US military still spends most of its time fighting spin-off wars (Syria, Iraq 2.0, ISIS, Yemen) of the original Iraq disaster. That ill-fated farce of an invasion either created the conditions, or exacerbated the existing tensions, which inform today’s regional wars.

via The Unmitigated Failure of the Iraq War