Conslusion: You are What You Do

The AIM NetworkNews and Politics

Forgetting the noise and arguments, the marketing and campaigning – a government’s job (and the job of us all) is to make the world a better place.

You don’t do that by worshipping wealth above well-being.

You don’t do that by supporting the fossil fuel industry and looking to join the world’s top ten arms manufacturers.

You don’t do that by engaging in rampant land-clearing to make way for livestock, inappropriate crops, or urban sprawls.

You don’t do that by habitat destruction of endangered species.

But while becoming more conscious of the patriarchy is one thing, unlearning years of conditioning to accept it is another.

How male privilege affects our boys

How do we account for our collective blindness to violence against women for century after century, asks Mark MacDiarmid.

Malcolm Turnbull’s spectacular elevation of ‘Australian values’ raises questions about his own values. Friday 21 April 2017 1 As a true blue Australian citizen I was perplexed with yesterday’s joint press conference between the Prime Minister Malcolm Turnbull and the Immigration Minister Peter Dutton to announce changes to citizenship laws. In fact, I became angry that they could play the race card in such an obvious way. The… 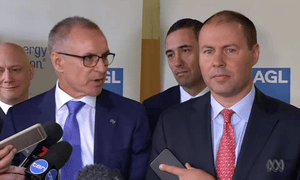 Despite decades of Tory propaganda and Labor’s neoliberal complicity, we consistently hate privatisation, value tax justice and are committed to fair pay

Source: Australians hold values that are essentially leftwing. This week in politics proves it | Van Badham | Opinion | The Guardian

VANGUARD – For an independent Australia and Socialism

Source: International contradictions and our fight for proletarian power

According to a 2015 headline in Rupert Murdoch’s rag, The Australian, “No, the rich don’t pay a ‘fair share’ of tax. They pay all of it.” The hypocrisy of a Murdoch-owned entity discussing tax is overwhelming. In 1999 the BBC published an article clearly setting out Murdoch’s well-known strategy for tax avoidance. “in the four…

Our values define us not our race or religion

When Muslims are threatened and mosques defaced NSW Commissioner  sees it as bigotry that requires no extra effort by police. When a 14-year-old Muslim boy yells abuse and waves a black flag it’s a hate crime. A concerted effort is made and arrests follow.

We must  be vigilant on more than one front. We must be united in countering terror. We must not allow fear and suspicion to triumph.Nothing would please ISIL extremists more than to see Muslim Australians being alienated or ostracised. Were this to happen, ISIL’s job becomes easier – it would help them recruit disaffected Muslims to their heinous cause.
At the same time, there are xenophobic factions that see an opportunity to spread their messages of hate. Muslim communities have reported an increase in hate attacks. There has been abuse of Muslims on streets and graffiti on mosques. There have been violent threats: last week a man armed with a knife entered an Islamic college in south-west Sydney.Anti-Muslim bigotry is now contaminating community harmony at large. For example, Sikh Australians say they are becoming targets of racial abuse because people are linking turbans to terrorism.

Bigotry has no place in our society. There is no right to be a bigot. Every person in Australia should be free to live without being subjected to harassment or humiliation. As a liberal democracy we uphold the freedom to practise your religion.

Indeed, while a small number subscribe to their abhorrent ideology, the overwhelming majority of Muslim Australians do not.Why would they support a group whose actions are certain to make their life more difficult?

Earlier this month in the Sydney suburb of Lakemba I attended a community barbecue organised by Lebanese community leader Dr Jamal Rifi. Thousands from the community attended under the banner of “Muslims Love Australia”. They are evidently patriotic.The patriotism I saw in Lakemba was a particular kind. It’s the patriotism of migrants, a love of country that comes not from ancestry but from citizenship.

Such patriotism is typically a pride that lies within. But it’s the right kind of pride for a multicultural Australia – a modern Australia that has been built on immigration. We are a country that is today defined by our values, and not by race or religion.

Everyone should feel relaxed and comfortable in their own skin. Everyone should enjoy the right to express their heritage or practise their faith. Where religion or culture clashes with any of these things, the demands of citizenship must prevail. Our civic identity is paramount.

“I pledge my loyalty to Australia and its people, whose democratic beliefs I share, whose rights and liberties I respect, and whose laws I will uphold and obey.”

Most of all, we must remember that national security can never be divorced from cultural harmony and social cohesion. And we are always better placed to combat threats when we are united rather than divided.