Trump, so it goes, was too big to fail. Well here we go again. According to the Wall St Journal: “More than 500 staff at Trump properties in New York, Washington, Las Vegas and Florida have been laid off or furloughed, say people familiar with the matter and federal disclosures. Several Trump hotels have been closed, and those still running have experienced dwindling occupancies. One day in March, the family’s flagship Trump International Hotel in Washington had just 11 guests in its 263 rooms, according to an employee.”

via Is Covid bankrupting Trump? – UnHerd We really need to know

Statistics are windows on change. Despite our criticisms, the bureau’s biennial income and wealth survey gives us the best view of inequality we’ve got, but large areas remain foggy.

In research for the Evatt Foundation, we have used data from the Bureau of Statistics, Organisation for Economic Co-operation and Development and national accounts to estimate that, for the first time in more than half a century, the richest 10% of households own more than half of Australia’s private wealth.

Read more: There’s a reason you’re feeling no better off than 10 years ago. Here’s what HILDA says about well-being

The Evatt Foundation’s results seem to stand up well, but governments should really be producing better data themselves.

Inequality and its harmful effects on economic output and stability are growing. We owe it to ourselves to find out by how much.

via What the Bureau of Statistics didn’t highlight: our continuing upward redistribution of wealth – Michael West

From massive inequality to the climate crisis, these powerful corporations “are able to demand that governments do their bidding”

via At the Heart of Global Woes, 157 of World’s 200 Richest Entities Are Now Corporations, Not Governments 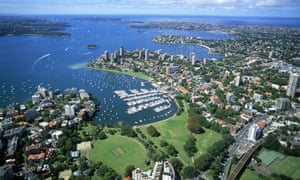 Source: From between the census lines emerges a picture of the great wealth divide | Nicholas Biddle and Francis Markham | Australia news | The Guardian

Is life getting better in Australia? Not on some important measures, according to the latest Wellbeing Index.

Source: We’re richer, but sicker and less equal, according to the Lateral Economics Index of Wellbeing

In 2015, Bill Gates’ fortune was evaluated at $83.6 billion. Mexican telecommunications tycoon has suffered largest losses among the billionaires, whose fortunes were included on the list

Just eight men own the same amount of wealth as the poorest half of the world’s population, a new Oxfam report reveals.

Source: Where the Richest Americans Live in 2015 – Fortune

The forbes 400 is the definitive list of wealth in america, profiling and ranking the country’s richest billionaires by their estimated net worths.

Calls for Social Justice Abound at the Oscars – Truthdig.

So what’s the point? What do we gain from this war of all against all? Competition drives growth, but growth no longer makes us wealthier. Figures published this week show that, while the income of company directors has risen by more than a fifth, wages for the workforce as a whole have fallen in real terms over the past year. The bosses earn – sorry, I mean take – 120 times more than the average full-time worker. (In 2000, it was 47 times). And even if competition did make us richer, it would make us no happier, as the satisfaction derived from a rise in income would be undermined by the aspirational impacts of competition.

The top 1% own 48% of global wealth, but even they aren’t happy. A survey by Boston College of people with an average net worth of $78m found that they too were assailed by anxiety, dissatisfaction and loneliness. Many of them reported feeling financially insecure: to reach safe ground, they believed, they would need, on average, about 25% more money. (And if they got it? They’d doubtless need another 25%). One respondent said he wouldn’t get there until he had $1bn in the bank.

For this, we have ripped the natural world apart, degraded our conditions of life, surrendered our freedoms and prospects of contentment to a compulsive, atomising, joyless hedonism, in which, having consumed all else, we start to prey upon ourselves. For this, we have destroyed the essence of humanity: our connectedness.

Yes, there are palliatives, clever and delightful schemes like Men in Sheds and Walking Football developed by charities for isolated older people. But if we are to break this cycle and come together once more, we must confront the world-eating, flesh-eating system into which we have been forced.