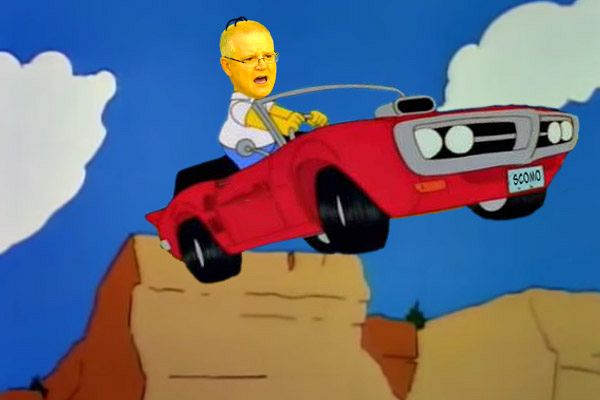 via Is the Morrison Government driving the economy off a cliff? 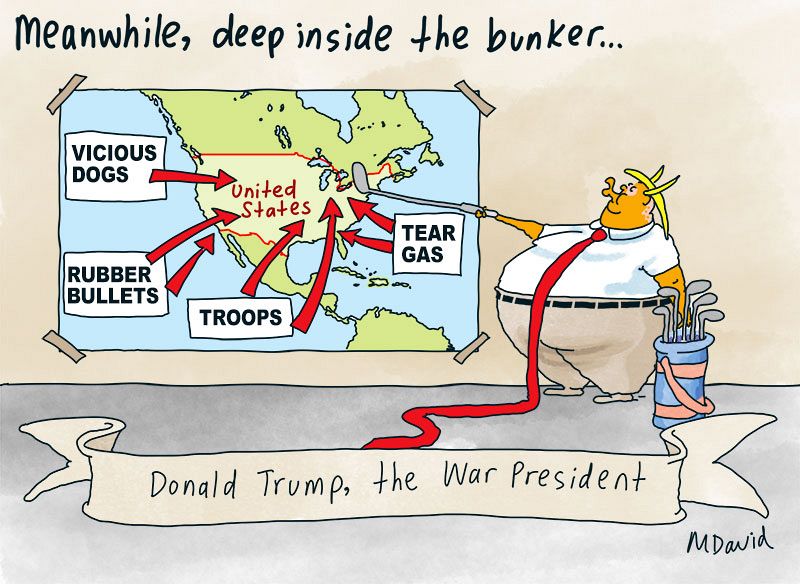 There are two ways to balance a budget: cut spending or raise taxes. The latter ran counter to party ideology, so Josh Frydenberg cut spending. Cutting spending withdraws money from the community. It is deflationary. So it was that lower spending meant lower economic activity. Growth drifted lower, so did inflation, so did interest rates. Lending criteria got tighter. Then the housing market got an attack of the wobbles.

The Libs are fond of talking about their Shopkeeper Theory; that is, that every shopkeeper must balance the books. Or they go out of business. So it is that the Government too must balance its books, they say, and the idea of balanced budgets is deployed as a weapon to bash political opponents.

The consummate paradox is that, while they deny the efficacy of what central banks are doing, what MMT describes – and espouse ShopKeeper Theory, the world’s central banks are actually creating new money anyway via QE. They are watching it happen while denying they can see it.

Do the grandchildren really pay the debt? The problem with Scott Morrison’s plan for recovery, and MMT – Michael West Since posting that on 26 February much has changed. Country after country has been set the IQ test, and the results have varied. China, Singapore, Taiwan, South Korea and Japan are well ranked, though China may have cheated. Italy and Spain are towards bottom of the class. Sweden’s results are still being marked, but very much worth watching. Holland has also tried an intelligent, adult approach, with many shops open, but as death rates rise may move to more severe lockdown. The US is a new arrival to the class, and will be evaluated in a few week’s time.

If you don’t have tests, or treatments, you have to use social distancing. Social distancing works if everyone does it, but if only 10% cheat, then the effect is blunted.

On a broader front, this pandemic raises the question: how much of our economy is strictly necessary? The essentials of food growing, processing and distribution probably account for no more than 4% of the working age population. Power generation and basic utilities perhaps another 4%. Perhaps the remnant 92% will all be bloggers.

via Testing, testing, by James Thompson – The Unz Review

It is welcome then that this federal government, intrinsically reactionary, prone to lassitude, ignorant, arrogant in its ignorance, has turned on the sluice gates. For lack of grounding, it is forced into the ultimate in pragmatism, dependent on a federal Treasury out of its depth.

But will it change its ways after this crisis relents? There’s no evidence, as there is no evidence of such to date in any other country. With a nasty budget black hole, that ‘bigger role’ will, in all likelihood, not be turned to permanently enhancing Newstart or abolishing Robodebt siphoning but to further tightening the screws.

via The state and the economy – » The Australian Independent Media Network 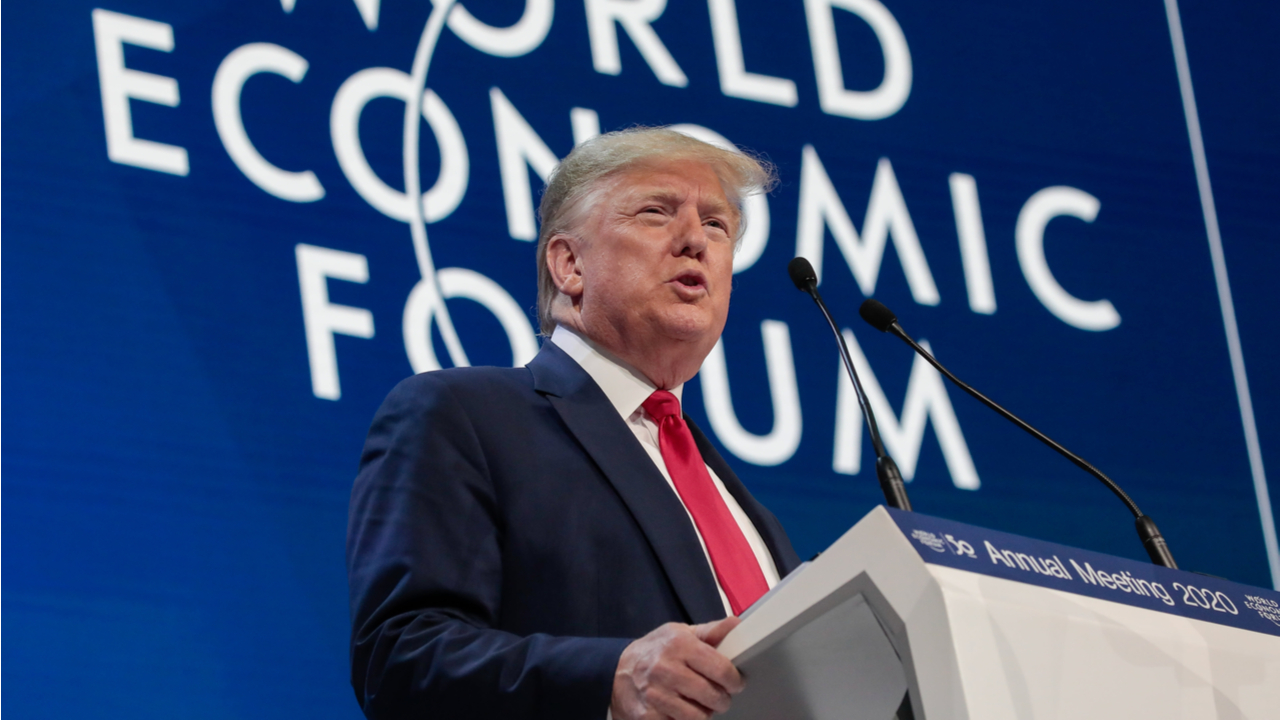 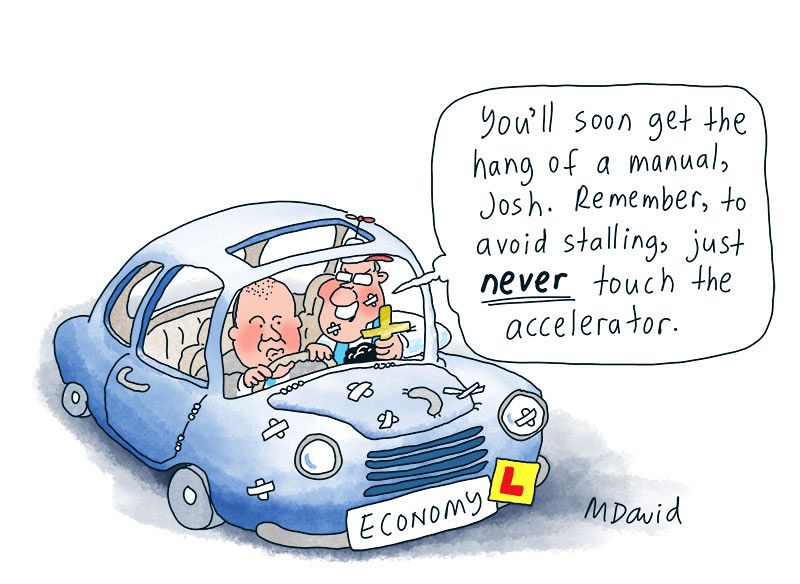 via World’s best economy 2019: No, not the Coalition’s Australia

President Trump and his aides are sending two simultaneous, contradictory messages about the economy: That it is booming, and everything is fine. And that it is time for emergency measures to keep this boom going.

It’s also certainly quite interesting that Team Trump, in private meetings with wealthy donors, is warning that a recession is coming. Meanwhile, on social media—where the regular people who like him get their information—Hair Twitler said the economy is “very strong.” You know that when the shit does hit the fan, Trump’s donors are going to end up much better off than his average Twitter follower. 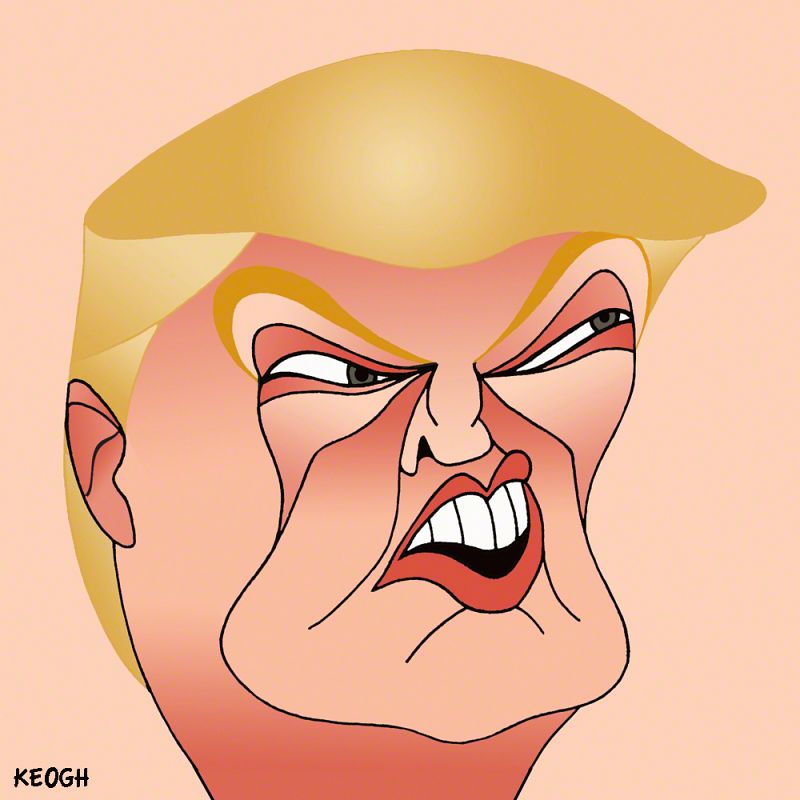 Most recent news on the U.S. economy has been upbeat and triumphant but the reality, as Alan Austin reports, is different.

PRESIDENT DONALD TRUMP’S ceaseless bragging about the U.S. economy being “the best in the World and in our Country’s history” has gained traction.

The reality is virtually the opposite. When Trump won office, America’s economy ranked 23rd in the world and 15th in the Organisation for Economic Cooperation and Development (OECD). That’s the club of 36 wealthy developed capitalist economies.

Today, the U.S. economy ranks outside the world’s top 40 and outside the OECD’s top 20. That is almost certainly its lowest ranking ever.

via Americans (and others) duped by fake news and tweets

We’re 16 months away from the 2020 presidential election. It’s likely that the U.S. economy will weaken. Trump will be responsible. HIs approval rating will decline.

via The Economy and the Election | The Smirking Chimp 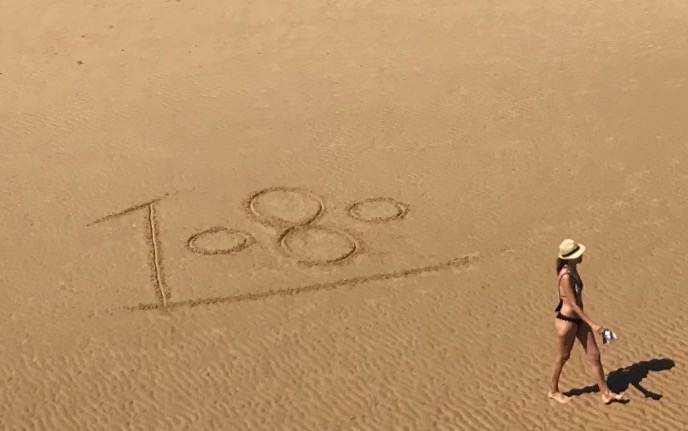 via Government and Debt: do as we say, not as we do – Michael West

That points to an exceptionally weak economy, susceptible to a growing list of potential international shocks; a message starkly at odds with that presented at the budget and the election.

Just two months ago, we were promised a decade of federal budget surpluses based upon a strong and recovering economy.
When a housing slump collides with rising unemployment

That’s the problem with booms. They tend to unwind, occasionally in spectacular fashion, especially when they’ve been supercharged with debt.

via With rate cuts and the real risk of a recession ahead, can Australia’s economic run of luck continue? – Politics – ABC News (Australian Broadcasting Corporation) 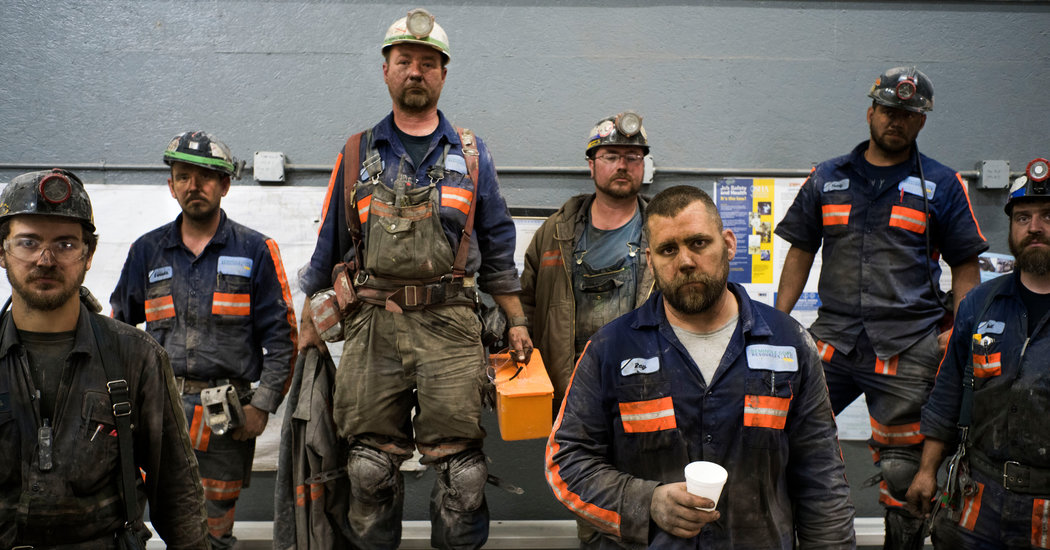 Yeah, yeah, yeah, unemployment is low and the stock market is high. But skyrocketing stocks benefit only the top 10 percent of wealthy Americans who own 84 percent of stocks. And while more people are employed now than during the Great Recession, the vast majority of Americans haven’t had a real raise since 1979.It’s bad out there for American workers. Last month, their ranking dropped for the third year running in the World Happiness Report,

Forty percent of workers say they don’t have $400 for an unexpected expense. Twenty percent can’t pay all of their monthly bills. More than a quarter of adults skipped needed medical care last year because they couldn’t afford it. A quarter of adults have no retirement savings.

The White House Council of Economic Advisers predicted the corporate tax cut would put an extra $4,000 in every worker’s pocket. They swore that corporations would use some of their tax cut money to hand out raises and bonuses to workers. That never happened. Workers got a measly 6 percent of corporations’ tax savings. In the first quarter after the tax cut took effect, workers on average received a big fat extra $6.21 in their paychecks, for an annual total of a whopping $233. Corporations spent their tax breaks on stock buybacks, a record $1 trillion worth, raising stock prices, which put more money in the pockets of rich CEOs and shareholders.

That’s continuing this year. Workers are never going to see that $4,000.

No wonder they’re unhappy. The system is working against them.

“The thing that’s related that I’m more concerned about is, we will eventually face another recession,” says Oh, of UCLA. “And what we’ve done through the Tax Cuts and Jobs Act is use a bunch of the tools that we need to deal with the next recession, at a time when we don’t have a recession.”

2. A short-term economic boost is fading

4. Most other impacts: Either too soon to tell or too hard to see

Just as in 2016, the actual economic conditions of the American people will be the defining issue for 2020. Ignoring it, or giving Trump a pass on the economy, will permit him to make the campaign about everything and anything else.

The corporate news media is doing it all over again — still equating aggregate national unemployment data and a robust stock market with a strong economy. And they have developed the face saving construct that Trump won only because the Russians stole the election, not because the media missed the slow motion collapse of capitalism that Trump exploited by convincing just enough people he had a magical time machine that could transport us all back to those halcyon days when the middle class was expanding.

Their master script is that POTUS is the Don of a Russian/American organized crime family that stole the American election.

That could all be true, yet if Mueller comes up short of actually taking Trump out, the media’s fixation on the intrigue will only inoculate Trump.

Just as in 2016, the actual economic conditions of the American people will be the defining issue for 2020. Ignoring it, or giving Trump a pass on the economy, will permit him to make the campaign about everything and anything else.

via Trump will score another win if Big Media fetishizes his soap opera while the working class suffers | Salon.com

Greg Sheridan of Murdoch’s Australian keeps insisting ” don’t listen to what Trump says pay attention to what he does. He’s not that bad”. Good one Sheridan even  broken clock is right twice a day.( ODT)

In a wide-ranging and sometimes discordant 20-minute interview with The Washington Post, Trump complained at length about Federal Reserve Chairman Jerome “Jay” Powell, whom he nominated earlier this year. He argued that rising interest rates and other Fed policies were damaging the economy – as evidenced by GM’s announcement this week that it was laying off 15 per cent of its workforce – though he insisted that he is not worried about a recession.

“I’m doing deals, and I’m not being accommodated by the Fed,” Trump said. “They’re making a mistake because I have a gut, and my gut tells me more sometimes than anybody else’s brain can ever tell me.”

The Coalition works on the theory that “a rising tide lifts all boats”, which is all very well if you happen to own a boat. The majority of the population is either bailing hard to stay afloat, treading water or drowning.

In the last five years, the world’s economies have made a strong recovery. Investment has returned, GDP is growing, profits are up and jobs are being created.

The problem is that all this extra wealth is going to the people who already own boats. 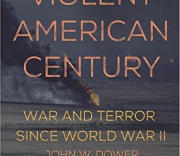 Whether the rationale is the need to wage a war on terror involving 76 countries or renewed preparations for a struggle against peer competitors Russia and China (as Defense Secretary James Mattis suggested recently while introducing America’s new National Defense Strategy), the U.S. military is engaged globally. A network of 800 military bases spread across 172 countries helps enable its wars and interventions. By the count of the Pentagon, at the end of the last fiscal year about 291,000 personnel (including reserves and Department of Defense civilians) were deployed in 183 countries worldwide, which is the functional definition of a military uncontained. Lady Liberty may temporarily close when the U.S. government grinds to a halt, but the country’s foreign military commitments, especially its wars, just keep humming along.