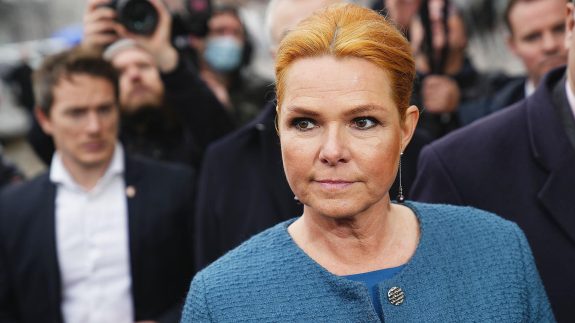 Immigration ministers in other countries should take note but the lessons of this case are unlikely to be learned in Australia. Down under, immigration officials act with brutal impunity confident that their callous decisions are unlikely to ever face stern judicial eyes. No Australian immigration minister has faced proceedings for culpability in returning people to lands they have fled, only to endure torture, persecution and disappearance. Or for ruining the mental health of asylum seekers locked in indefinite captivity in a subsided Pacific concentration camp system. They have set the standard, and countries like Denmark have been inspired. Støjberg might well count herself unlucky.

The Age believes, however, that there is a more sensible path. The Victorian and federal governments should work more closely together to ensure that programs such as the Jiangsu grants operate in a way that ensures Australian intellectual property can be protected and there is no military application. Australia needs to get smarter in its dealings with China. We need to work out where we can co-operate for mutual benefit and resist the urge to simply shut down programs in the face of difficulties.

A smarter way for Australia to handle its dealings with China

Fighting Fake News with REAL,15/7/20; Palace Letters, WHO,I can’t breathe: “This is what history sounds like to us,” Stan Grant | …

Mr Andrews has started his first week as the leader of a newly elected Labor Government after a convincing win at the weekend.

Labor is on track to win at least 47 seats in the election, enough to have a majority in the 88-seat Parliament, and Mr Andrews will be sworn in later this week when vote counting is finalised.

Mr Andrews said Mr Abbott tried to convince him to go ahead with the project.

“He invited me to break my commitment on East West and I indicated to him that I would not be doing that,” Mr Andrews said.

“We then talked about the many other infrastructure projects that we’ve laid out the opportunities to partner with him on his commitment to the Australian community that he would be an infrastructure PM.

Mr Abbott said the Federal Government was still “absolutely committed to East West Link” and he hoped Mr Andrews would have a “change of heart” on the project.

“He is sticking by what he said during the election but obviously he is now in the process of getting his feet under the desk, consulting with public servants,” Mr Abbott said.

“No doubt he will be talking to the Government’s lawyers about the contracts that have been signed so let’s wait and see what happens.”

Mr Andrews said he had sought advice about releasing documents about the toll road project and said he planned to have a discussion with the consortium building the project soon.

“I have a clear mandate, our team has a clear mandate to end the secrecy on this project and I will deliver in full on the commitment I’ve made,” he said.

Mr Andrews said Parliament would be back to work before Christmas, beginning with the Back to Work Act.

“Pay-roll tax credits for all employers who take on a young person, take on a retrenched worker, take on a long term unemployed Victorian,” he said.

“There are then a raft of other things in that package, things like the premier’s job and investment panel, the regional jobs fund, Start Up Victoria, which is all about the translation of research into the important commercial opportunities that our state desperately needs.”

Mr Andrews said he would also get to work establishing a royal commission on family violence.

“This is going to happen, because more the same policy will mean more the same tragedy, I am convince of that, the data tells you that and I have met with too many people who have lived with the pain of family violence to be in any doubt about that,” he said.

The make-up of the Upper House is likely to be challenging for the new Labor Government.

There could be as many as 11 cross-benchers, made up of the Greens and various other minor parties.

ABC election analyst Antony Green said it was going to be difficult for the new government.

“At this stage there are five Greens elected and six other parties, a collection of the Shooters Party, the DLP and the Sex Party, denying each side of politics a clear run at the Upper House,” he said.

“Labor could end up with as few as 13 seats.

“You could get an unwieldy number of cross-benchers to pass legislation or the Government will have to deal with the Opposition, so it’s going to be a very difficult life for whoever leads the Labor Party in the Upper House.”

The defeated Denis Napthine said he fully intended to serve a full term in Parliament, after announcing he would step down as leader of the Coalition following the party’s loss.

Dr Napthine has represented the seats of Portland, and later South-West Coast, for a combined total of more than 25 years.

He was one of a few Liberal MPs to increase the margin in their seat.

“They’ve voted for me, they fully expect that I will continue to serve as the Member for South-West Coast, and that’s what I’ll do,” he said.

Former planning minister Matthew Guy and the former treasurer Michael O’Brien were considered the front runners for the Liberal leadership, with a ballot expected to be held in the coming days.

Peter Ryan, who was the leader of the Nationals, announced today that he was stepping down.

Earlier, he said the Nationals would hold talks with the Liberal Party over the future of the Coalition and whether it would continue

The Nationals face the possibility of losing party status if they do not win 11 seats.

Mr Ryan said the immediate concerns were Monday’s pre-poll counting for the seats of Shepparton and Morwell.

Vote counting continues in a number of seats

Sue Lang from the Victorian Electoral Commission said it would continue to sort through pre-poll, absent and provisional votes on Monday.

She said it was still too early to call some seats, with close counts for the two-candidate preferred vote.

“There are still eight seats that have a very slim margin in the two candidate preferred area,” she said.

“There’s 49 to 50 per cent range, and those districts include Bentleigh, Frankston, Morwell, Shepparton, Richmond, Prahran, Ripon and possibly Melbourne.”