via John Oliver: Trump Should Treat Women Like He Treats Kim Jong Un | Crooks and Liars

via John Oliver Is Right: If Only Trump Was As Vicious To Russia As He Is To Iran | Crooks and Liars

via John Oliver Makes the Case for Impeaching Trump: ‘Nobody Is Above the Law’

Federal election 2019: Tony Abbott in the fight of his life in Warringah

He’s labelled it ‘the weirdest waste of Australian money since every Baz Luhrmann movie ever made’. 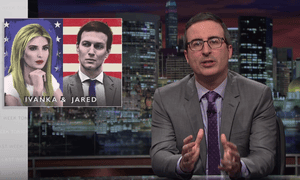 The host of Last Week Tonight discussed the pair and how it is ‘dangerous to think of them as a moderating influence, as reassuring as that may feel’

The Catheter Cowboy has a word for you (okay, just Donald Trump) about defending sexual predators, to run during the Bill O’Reilly Show!

Being on hiatus for the past few months, John Oliver said while promoting Sunday night’s first Last Week Tonight of the Donald Trump presidency, was like “being tied to a train track, watching the train coming.”

Source: John Oliver’s back with a plan to enter President Trump’s info-stream

The long-form reports on “Last Week Tonight” kept us all informed abut the election, opioids and pyramid schemes

Source: Best of 2016: Six times John Oliver made us all smarter this year – Salon.com

The unwelcome return of Carlos Danger.

“I’m staying in this country like the string quartet stayed on the Titanic,” Oliver cracked at a Tuesday event VIDEO

Source: John Oliver vows to stay in U.S., even if Donald Trump is elected – Salon.com 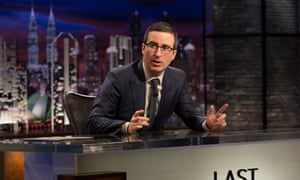 The Last Week Tonight host called the taped comments ‘entirely in character’ for the businessman, condemning Paul Ryan and Billy Bush in the process

Source: ‘This is on you’: John Oliver ridicules Republicans over Trump groping tape | Television & radio | The Guardian

“You would not be a loser—you would be a legend.”

It’s an offer he might not want to refuse.

By John Scales Avery | (Inter Press Service) | – – COPENHAGEN, (IPS) – As many observers around the world …

Source: Can Americans get back their Democracy from the Oligarchy? | Informed Comment

Could the chaos in Britain come to the United States next?

Source: John Oliver Says Brexit Vote Is A Warning For U.S. Trump Supporters: ‘There Are No F**king Do-Overs’

On the upcoming British referendum on whether the U.K. should exit the E.U., the “Last Week Tonight” host expresses his ideas in a “violently British” way—some of which involves a hateful song.

“You would expect the Brexit camp to have some pretty solid arguments. Unfortunately, many of them are bullshit.”

Waleed Aly’s Gold Logie wasn’t only a win for diversity on Australian TV – it was a win for intelligent public debate.

Source: What Waleed Aly and John Oliver have in common

He specifically called out Mike Huckabee for his wildly inflated scare tactics.

“Nothing about what these assholes are trying to do is going to work. France is going to endure.”

On “Last Week Tonight,” John Oliver took a look at the long history of child labor in the fashion industry.

The use of sweatshops and child labor in clothes manufacturing has long been out of style.

As illustrated in this political cartoon from 1870, it’s been associated with nasty, dehumanizing working conditions, health risks, and exploitation.

It’s a modern problem made worse by plunging prices in the fashion industry.

Sure, companies do what they can to say they’re against the use of child labor, but the current deal-driven state of the fashion industry makes it so there’s really no alternative.

I mean, how else do you think the $15 dress came into existence?

It used to be that the use of child labor was enough to really rattle a company. Take for example, Kathie Lee Gifford.

In the mid-’90s, it came out that Gifford’s clothing line was being produced in Honduras by 13- and 14-year-olds.

As one might expect, Kathie Lee became the target of protests.

She even testified on the issue in front of Congress.

Within a couple of years, Gifford was out the door at “Live with Regis and Kathie Lee,” and was never heard from again…

…unless you count the millions of people who tune in to see her on “Today.”

Ah, yeah that. Okay, so maybe the sweatshop scandal didn’t destroy her career after all.

See? It all comes full circle.

On “Last Week Tonight,” host John Oliver skewered the fashion industry for failing to live up to promises that they’d avoid sweatshop labor.

In 1995, it came out that Gap was using child labor to manufacture their clothes.

They promised to make changes.

In 2000, they had a similar situation in Cambodia, and yes, they promised to fix the problem.

And in 2007, they were hit with yet another child labor scandal, and yes, again, they promised to make changes.

Fool me once, shame on you. Fool me twice, shame on me. Fool me three times, and it’s pretty clear we’re willing to accept child labor so long as it results in affordable fashion.

There are still lots of people ready to push back on companies that use child labor, but most of us seem content to sit on the sidelines and rake in the deals.

Some people take their demands to the streets.

And protest by becoming human billboards.

But most of us?

Companies need to be held accountable. It’s no longer acceptable for them to just claim ignorance on the issue.

If you’re a company like Gap, Forever 21, or H&M, and you don’t know exactly which factory is producing your clothes, it’s probably bad news.

If it seems to good to be true, it probably is — this goes double for $4 T-shirts, $12 blazers, and other deals.

The best thing you can do as a consumer is stay up to date on which companies are using child labor, and when you find one that does, take your business elsewhere.

Back in the good old days, there was basically only one way to get rich.

You invented something. And then you sold it for money.

But guess what, kiddos? There’s a brand new way of cashing in that’s taking America by storm. And the best part is, you don’t even have to, like, invent anything.

Just apply for some super-vague patents!

Now, for this to work, you have to make sure your patents are super-broad and vague so that they encompass pretty much anything you can think of.

Now sue the pants off the people who actually invent things that could potentially kinda sorta be covered by your super-vague patents but are too poor and/or skittish to fight you in court!

You may have heard John Oliver talk about it on his show.

While Oliver makes some fantastic points about how ordinary people and small businesses get railroaded by companies that make their living suing people for patent infringement, he leaves one big thing out.

Threatening innovators with huge lawsuits and hoping they settle out of fear isn’t just one of the shadiest ways of doing business imaginable.

It’s also a huge roadblock to technological and economic progress.

Remember how in 1875, we didn’t have cars? Or planes? Or mass-produced electric lightbulbs? And then, within 30 years, we had all those things?

(Also zeppelins. How could I forget zeppelins?)

That was because people thought, “Hey! Why don’t I invent this really cool thing that doesn’t exist already so that I can make a ton of money.”

But now, all the people who would otherwise be inventing all the cool stuff are saying to themselves, “Hey! Why don’t I not invent anything because if I do, I’m just going to get sued by someone who claims to hold the patent on it already.”

Don’t take it from me. Take it from this super-dense paragraph about how, despite a booming market and high demand, companies have stopped developing software for storing medical images.

“Why, precisely when the market for their product had just taken off, would companies stop innovating? An explanation comes from Catherine Tucker, an economist at MIT who has studied the medical IT sector. In an unpublished study, she shows that the slowdown in R&D occurred as a result of litigation by a company whose primary reason for existing is to acquire the rights to others’ inventions and file patent claims against producers of related products — a patent troll. Tucker’s study is, to date, one of the best pieces of quantitative evidence of the broken state of America’s patent system, a critical concern not just for improving health care but for encouraging the innovation that’s needed to ensure future economic prosperity.” — Ray Fisman, Slate, April 9, 2012

Or this one, about how companies named in a patent infringement lawsuit are more likely to limit research and development spending.

“Researchers from Harvard and the University of Texas recently examined R&D spending of publicly listed firms that had been sued by patent trolls. They compared firms where the suit was dismissed, representing a clear win for the defendant, to those where the suit was settled or went to final adjudication (typically much more costly). As in the previous paper, this comparison helped them isolate the effect of lawsuits from other factors. They found that when lawsuits were not dismissed, firms reduced their R&D spending by $211 million and reduced their patenting significantly in subsequent years. The reduction in R&D spending represents a 48% decline.” — James Bessen, Harvard Business Review, Nov. 2014

Thankfully, as J.O. reports, there’s a bill currently kicking around Congress that seeks to limit this. And shockingly, it has support from Republicans and Democrats.

(Honestly, we’re too bored to fight over this one.)

But the last version of it never came to a vote in the Senate, due in large part to pressure from lobbyists for trial lawyers.

If this whole terrible thing gets you steamed up and you’d like to translate your anger into productivity instead of deep self-loathing at your own powerlessness, what are you waiting for? You have a senator!

Call that guy or lady right now and tell them to vote for this thing.

I would link their number for you, but only you know where you live. So go Google it!

Why is our fake news so much better than our “real” news? Oh, never mind, we all know the answer. Via Rolling Stone:

As Last Week Tonight host John Oliver notes early in his incredible, 20-minute examination of the global battle being fought over tobacco advertising, the smoking rate in the United States has dropped from 43 percent in 1965 to 18 percent today thanks to strict laws outlawing cigarette ads.

With America largely kicking its smoking habit, the tobacco industry has been forced to make up the revenues abroad, leading to court battles in countries like Australia, Uruguay and Togo, one of the 10 poorest nations in the world.

Oliver’s takedown also focuses on the extreme lengths companies like Philip Morris International are going to place their products in the hands of the youth, including a Marlboro-sponsored kiosk outside an Indonesian school where teens can purchase a single cigarette for a dime.