I don’t live in Victoria and I don’t vote in Victoria but from a distance it appears to me that the two main contestants in the upcoming state election are the current Premier representing the ALP, Dan Andrews and Newscorp although, in the latter case it is not clear if it is the dirty digger himself standing or the prodigal son who may be living on his yacht in Port Phillip Bay – but is he on the Victorian electoral roll ?

Truth is it’s neither and they don’t seem all that fussed about the Liberal Party but they both dearly want to destroy the ALP.

The Age’s attempt to make out that Dan Andrews is pushing to make public reporting of IBAC leaks illegal, and that Matthew Guy, is a crusader for press freedom is actually propaganda built on a house of cards. Buried yet again in the Age’s biased report is the hidden fact. It’s IBAC and QC Redlich who is appealing for stronger laws against the leaks in their investigations. Leaks well before any formal report is even released and leaks before any conclusions have been reached. The new Age is in the full conspiracy swing of an American a PR agency modelled on Fox News, News Max and OAN in competition with Murdoch’s Herald Sun for number one spot.

IBAC now wants to go a step further and is pushing the government for “urgent” legislation that would make it an offence for any person to report the contents of draft IBAC reports.

In a strongly worded statement, IBAC said it was a “critical” part of the natural justice process to give people the chance to respond to preliminary findings.

It said this natural justice process had forced it to seek the injunction to prevent The Age from publishing information from the draft report. (The Age)

Daniel Andrews has issued a blistering statement about the “smear and innuendo” surrounding an anti-corruption investigation.

The coalition kickstarted its campaign with a 1970s-style ambulance dubbed the “Ditch Danmobile”, complete with its own Twitter page.

Daniel Andrews’ week went downhill as he was forced to bat away repeated questions about a 2013 car crash involving his family, after the young man who was seriously injured cast doubt on the premier’s version of events. But it’s not the accident itself that’s at issue here. The point I’m making is that for the issue to resurface in the midst of an election campaign is rather interesting timing. Coincidence? Of course, one couldn’t accuse the Murdoch paper of having an agenda. I’m sure that every ten-year-old incident where no new evidence has been produced is always worthy of a front page, so I’m sure we’ll have something about Matt Guy’s lobster lunch and how one of the guests was an Australian citizen thanks to the largesse of Amanda Vanstone and her compassionate granting of citizenship.

Fighting Fake News with REAL, 5/11/22, Peter Costello has walked in the room; “IBAC Uncovers” “but we don’t know what” Hanso down $250K The Mad Hatters Tea Party;

Another blue bottle is about to fall

The starting gun has sounded in Victoria’s official election campaign but the race to the poll is off to a slow start as the state grapples with prolonged flooding.  Governor Linda Dessau signed the writs on Tuesday, ending the 59th parliament and formally triggering the election process. Labor leader Daniel Andrews kept a low profile on […]

Victorians will be able to apply for postal votes from Wednesday and cast ballots at early voting centres from November 14.

“What was distributed was a pre-filled general postal voter application,” he told ABC Radio.

“It was not a postal voting application. There is no rule preventing a party promoting an application to be a general postal voter.”

The budget office has counted 59 announcements from the Liberals and Nationals that have no estimated cost, based on media statements released by the parties, and another 222 that were announced with funding, at a total cost of $25.7 billion. Labor had two commitments without funding, and 81 with funding worth a total $8.3 billion. 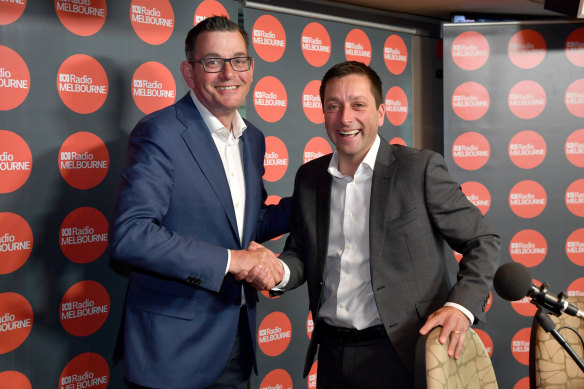 However, what we are witnessing is Matthew Guy in opposition being given more time than any other opposition leader on Peter Costello’s Ch9 presented as News. When will this free time be declared a political donation because his fake promises are certainly not news or information?

At the time of writing, with only a few weeks to go, there is still no agreement between the parties for even one leaders’ debate on radio, TV or at a community forum. Senior ministers and their shadows ought similarly to be committing to open public contests where voters have an opportunity to speak directly to those who seek to govern our lives.

Source: Are we witnessing an election campaign without proper debate? 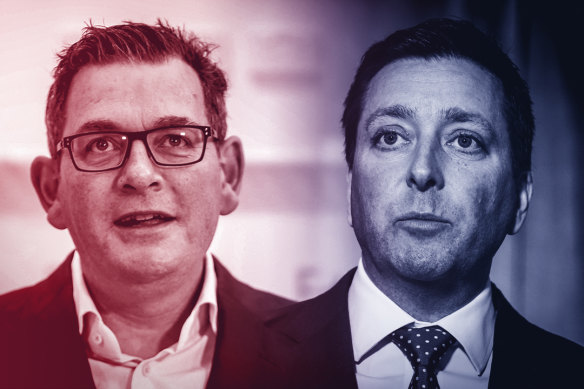 ‘Fine line between an underdog and just a dog’: Polls bleak for Guy

However, preferences are flowing strongly back to Labor, who voters say have made mistakes but have strong leadership, with the government ahead 59 to 41 per cent on a two-party-preferred basis – pointing to a potential landslide next month.

Key points The Victorian Electoral Commission redrew the boundaries for state seats ahead of the November election. Labor stands to benefit from the redistribution, with two net gains, based on the 2018 vote.AdvertisementOpposition Leader Matthew Guy’s election prospects have been dealt another blow, with new state electorate boundaries predicted to give Victorian Labor a net gain of two seats ahead of November’s state election. 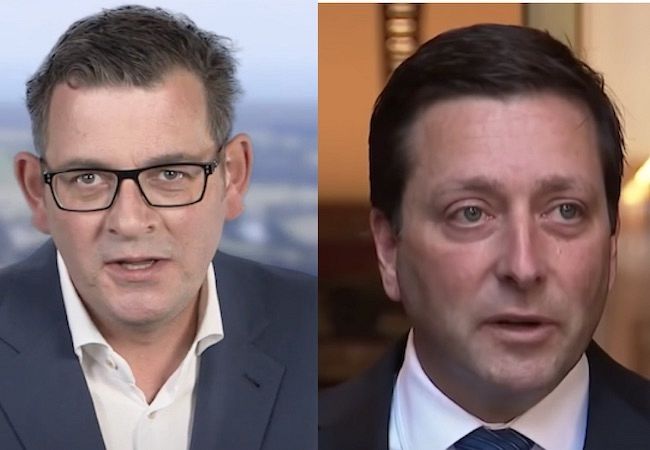 The State of Victoria

VOTERS will be looking for a party able to ramp up Victoria’s renewables capacity, provide transition certainty to energy workers in the Latrobe Valley, and prove to the world that our state is both serious and ambitious as a leader in meeting the global challenge to mitigate climate change.

But when an electorate like Brighton convulsed so dramatically at the thought of voting Liberal that it very nearly chose a Labor Party teenage nobody, and when the people of blue riband Hawthorn turned their backs on their Liberal MP, John Pesutto – a man respected enough to appear the sort who could actually lead his party out of the depths, should he survive – brand Liberal has an awful lot of healing to do in an awfully short time.

Those voters, quite obviously, were rejecting a party they felt had rejected them, or at least their idea of what the Liberal Party was supposed to be.

The behaviour of what had been their party at federal level – the flirting with Tony Abbott’s choice of punisher, Peter Dutton, the overthrow of their idea of a leader, Malcolm Turnbull, and the choice of a chancer, Scott Morrison, as a replacement prime minister – had poisoned them.

And the poison had seeped all the way down.

Nothing is as clearcut as Matthew Guy and News Corp would like to make out. But it will be dragged to the next election anyway. (ODT)

The Ombudsman found that Labor MPs, including six sitting ministers, had breached Parliament’s members’ guide and misused public funds. But she said they had acted in good faith.

In her letter, she said those involved in the rorting had been wrong but that the Ombudsman applied a different standard of proof to a police criminal investigation.

“I need to be satisfied on the balance of probabilities, while a criminal case is required to satisfy a court beyond reasonable doubt.

“This allows me to conclude that an action is ‘wrong’ without it necessarily reaching the threshold for criminal action.” 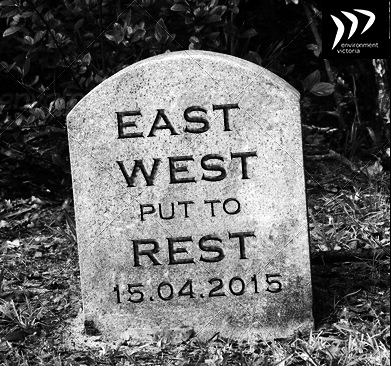 Federal politicians have always been quick to point out that party losses at the State level have been, and always will be, because of State issues. Federal politics and personalities play no part whatsoever in the election and the subsequent result; it’s fought on State turf.

Yet . . . federal politicians have also been quick to point out that victories at the State level – for their party – were delivered as a protest vote against the ruling federal party, should of course, they themselves be in opposition at the time.

Or they could go completely overboard – such as Tony Abbott did after Labor’s loss in the Tasmanian State election – and announce that they single-handedly won the election for their State counterparts.

(Mind you, when the South Australian State election didn’t go the way Abbott had hoped, he went to great pains not to comment on suggestions his involvement in the campaign had a negative impact on the Liberals’ result).

News is now in that the Napthine Government has been kicked out after only one term. Already members of Abbott’s Government have distanced themselves from the result. Head on over to Twitter and look at the ‘it wasn’t us’ tweets.

I live in Victoria and this is the first Victorian State election I’ve voted in. However, I haven’t been here long enough to have much of an idea about State issues and what issues the parties have campaigned on. So I went against my ‘norm’ and registered a protest vote against the Federal Government, and in particular Tony Abbott.

I wasn’t alone. Speaking to polling-booth volunteers, the message was the same: people weren’t voting against Napthine – they were voting against Abbott (or his government/Hockey’s budget). In the word of one voter, just to “watch him squirm”.  Again, head on over to Twitter but this time look for the ‘it was them’ tweets. They dominate Twitter.

Pre-election it was forecast that Abbott could be the factor that will lose the election for Napthine. It looks to be the way.

But will he squirm? I doubt it.

Either he won’t have the courage or he is so full of hubris that he is blind to the simple fact that he’s totally on the nose. In 2016 he will join Napthine as the leader of a ‘one-term’ government.

Nonetheless, I look forward to what he has to say about the Victorian election result.

Is he in hiding? 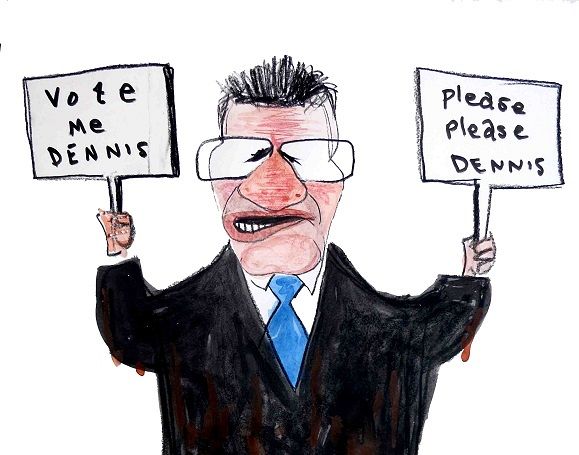 Yet again, Sportsbet has beaten Sky News, the ABC, Fairfax and Newscorp to the punch, we’re calling it:

Labor will saunter to a comfortable victory in the Victorian election and as a result we’re paying out on them early.

At 6am we paid out over $100,000 on Dan Andrews sweeping to power after Saturday’s vote.

Despite us paying out on Labor, our Victoria election markets are still open.

Still fancy a punt on the Liberals to take it? You can still bet on them, they’re a tasty $5.50.

You can have a punt on everything from seats, to the upper house majority, the last declared seat, and each individual Victorian electorate.

And if you’re a bit of a political eagle, then why not have a flutter on our other politics markets – everything from the gender of the next US President to the Republican Party nominee.

There’s surely some value in Ted Cruz as an outside bet at $17.