In days gone by, government ministers never survived misleading parliament, for example. But Prime Minister Scott Morrison’s offensive, bellicose ramblings about former Prime Minister Kevin Rudd on Monday (7 December), provide another case study in how to avoid scrutiny. Morrison was asked by Deputy Opposition Leader Richard Marles in Parliament: “Why have Tony Abbott and Alexander Downer been able to leave and re-enter Australia multiple times this year when there are thousands of vulnerable, stranded Australians who haven’t been able to get home once?” Morrison replied by alleging Rudd had also obtained privileged travel exemptions. Except Rudd hadn’t.

Is Australia the China it accuses of being Secretive?(ODT)

Witness J spent 15 months behind bars in Canberra’s Alexander Maconochie Centre, after being sentenced in the ACT Supreme Court to two years and seven months in jail for serious national security offences.

After being released from jail in August 2019 under strict conditions, including six-monthly regular psychological testing and an overseas travel ban without prior permission, Witness J launched civil proceedings against the ACT Government.

Witness J has used the anonymity of social media to criticise his former employer and the secrecy shrouding his case.

“Permanently secret legal proceedings is not the kind of conduct we want an Australian justice system to include,” he told the ABC late last year.

“The public has an interest to know when information is being kept secret from them — it’s not good enough for the public to be told ‘it’s in your interests that you are not told’.” 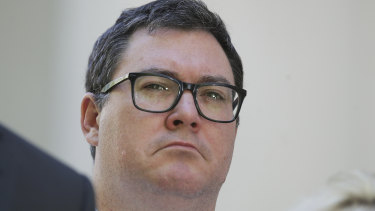 Nationals MP George Christensen has blocked the release of information about a federal police probe into his frequent travels to the Philippines over a four-year period.

Increasingly this government is seeking to subvert due process and impose their agenda in totalitarian fashion.

Regardless of whether you think the increase in fuel excise is an appropriate measure, the move to introduce it through regulation rather than legislation is specifically designed to bypass parliament.  The regulations will need to be backed up with proper legislation by the Senate within 12 months or the money raised will have to be refunded.

As reported in the SMH

“The government believes the ploy will put Labor and Greens senators in a bind at that time forcing them to choose between keeping the escalating revenue stream, or voting it down forcing the government to pay potentially hundreds of millions of dollars collected from motorists back to oil companies.

While the incremental inflation adjustments will raise an expected $167 million from motorists by November next year, little-appreciated new compliance costs for service stations are calculated at $5.06 million according to Treasury estimates.”

So much for cutting red tape to help small businesses.  They also ignore the flowon costs to households as businesses pass on increased delivery expenses, and the cumulative effect of twice yearly increases.

And it seems they may be trying to introduce the GP co-payment in the same way.

“There is no capacity to introduce a $7 co-payment through regulation, the advice from our legal people within the department as well as with attorneys is the $7 co-payment needs substantive legislation to support the co-payment.”

But yesterday he changed that message, refusing to rule out the introduction of the $7 levy by regulation to bypass the need for legislation.

“I am not going to rule things in or out. I am saying that there are options that are available to the Government,” Mr Dutton said.

Finding ways around our parliament and our laws is becoming a habit.

After the High Court ruled in June that the federal government could not directly fund religious chaplains in public schools, Christopher Pyne chose to give the money to the states with the direction that it could not be used for secular welfare workers.

So much for their claim that education decisions should not be dictated by Canberra.

In February, a Senate inquiry paved the way for the Parliament to give Environment Minister Greg Hunt legal immunity against future legal challenges to his decisions on mining projects.  It will protect him from being challenged over deliberate or negligent decisions that do not comply with the law.

The Coalition government has now licensed Greg Hunt to avoid compliance with the EPBC Act.  The amendment retrospectively validates ministerial decisions – even if they did not comply with the EPBC Act when they were made.

We are also losing our right to appeal development decisions.

The Abbott government’s move to establish a single approval process by passing environmental approval responsibilities onto the states and territories creates a conflict of interest as they raise revenue from land sales and mining royalties.

In early 2014 the Queensland government proposed to confine the objections and notifications process for a mining lease to people owning land within the proposed lease.

The Coordinator-General is fast becoming an almost supremely powerful czar for large projects in Queensland, subject only to the political whims of the state government.  He can also prevent any objections to the environmental authority for a coordinated project from being heard by the Land Court. When combined with the severe restrictions on objections to mining leases, very few people can now challenge matters such as impacts on groundwater of large mines that are declared a coordinated project.

Under the federal Coalition’s one-stop shop the Coordinator-General is also proposed to have power to approve projects impacting on matters protected under federal environmental laws.

And that’s not the only avenue for appeal that is being shut down.

Australians could be left with no appeal rights against government secrecy by the end of this year.

The May budget cut $10.2 million funding for the Office of the Australian Information Commissioner (OAIC) which handles Freedom of Information appeals.  The government wants appeals to be handled by the Administrative Appeals Tribunal instead.  This move is being blocked in the Senate so we will be left with effectively no avenue for appeal.

But perhaps the most blatant disregard for the law is being shown by Scott Morrison who, in a Napoleonic gesture, has conferred on himself the power to revoke a person’s citizenship.  The new laws provide the Minister with the power to set aside decisions of the Administrative Appeals Tribunal (AAT) concerning character and identity if it would be in the public interest to do so and confer on the Minister the power to make legislative instruments.

Morrison has condemned innocent people to indefinite incarceration and washed his hands of any responsibility for their welfare.  He has ignored warnings that his actions are in breach of human rights and is actively outsourcing our responsibilities under the Refugee Convention at enormous cost to this country.  He is now even blocking refugee applications from people coming through official UNHCR channels.

Journalists have been denied access to detention camps.  Even the head of the Human Rights Commission, Gillian Triggs, was denied access to child asylum seekers on Nauru on the grounds that the commission’s jurisdiction did not extend beyond Australia’s borders.  The cost of a single-entry media visa to Nauru rose from $200 to $8,000.

And if any of us report on the machinations of this government, our fate is in the hands of Attorney-General George Brandis who has the individual power to determine if we should face a possible ten year jail sentence.

So much for free speech, transparency and accountability.