When a country starts casting around for 60-year-old veterans to send to the front, you know that something’s wrong. All hands don’t go on deck unless the ship is foundering. It’s not yet clear whether the Russian ship of state is taking on water. But its military effort in Ukraine is obviously at the SOS stage.

Source: Is Putin in a Corner?

Ordinary Russians are receiving a wake-up call to the actual situation on the ground in Ukraine. Decision-makers at the upper echelons of Russian society may soon receive theirs as well.

Source: Russians flee the Draft as the Reality of War hits Home

Another war has been sold to the public thanks to the Establishment media and government talking heads.

Six Years (and Counting) of Brainwashing

Thanks to US media, a very small percentage of Americans know that:

On a recent interview with the Useful Idiots podcast, Noam Chomsky repeated his argument that the only reason we hear the word “unprovoked” every time anyone mentions Russia’s invasion of Ukraine in the mainstream news media is because it absolutely was provoked, and they know it.

Source: Caitlin Johnstone: It’s not okay for grown adults to say the Ukraine invasion was “unprovoked” – Pearls and Irritations

After Putin announced mandatory military service, demonstrators called the mobilization a “burialization” — and more than 1,000 were arrested in cities across Russia.

Source: Russians Return to Streets to Protest Widening of Putin’s War on Ukraine

The son of a top Kremlin official revealed in a prank call that he had no intention of being called up for Vladimir Putin’s war mobilisation.

Nikolay Peskov, 32, son of the president’s spin-doctor and war spokesman Dmitry Peskov, believed he was talking to a military call-up officer.

He fell for the phone sting and made clear he would pull strings in the Kremlin so he did not have to obey the mobilisation order.

The call evidently showed that the entitled sons of the Russian political elite do not expect to be sent to the front, unlike hundreds of thousands of other Russians from ordinary backgrounds who will get no exemptions.

Just like that Putin has rewritten the history of the war. How easy it is to become the victim of Ukraine aggression.

On Wednesday in Moscow President Vladimir Putin announced that referenda to decide whether to join Russia would be held in those four places from this Friday until next Wednesday. After that, the Russian Duma must decide whether to accept the results and formally annex those territories into Russia.

“Putin’s options for the future are bleak, particularly as he increasingly feels the heat of domestic opposition,” the first intelligence official said. Per Arkin, the official also noted “the impact of 60,000-plus Russian casualties and as well as the bite of sanctions and the controls on travel as challenges to Putin.”

Source: The Smirking Chimp | News And Commentary from the Vast Left-Wing Conspiracy

War fuels rape, sexual torture, and sexual exploitation of women and girls by male soldiers and civilians. Every documented war holds accounts of this acute sexual injustice, including the current Russia-Ukraine war. “For predators and human traffickers, the war in Ukraine is an opportunity – and women and children are their targets,” states UN Secretary-General Antonio Guterres.

Source: All the Victims of the Ukraine War

Taras Berezovets is a Ukrainian analyst and reporter, now serving with one of his country’s special forces outfits, who keeps his hand in at his old gig with a lively feed on the socials. On the ninth of September, in the early days of the current offensive, he published a letter from an enemy soldier, V.V. Tarasenko, to his wife Valeria. Tarasenko is dead. 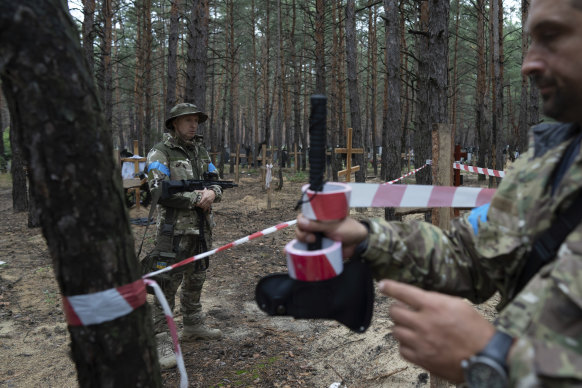 Ukrainian authorities have found a mass grave of more than 440 bodies in the eastern city of Izium that was recaptured from Russian forces, a regional police official said on Thursday, adding some of the people had been killed by shelling and air strikes.

On Wednesday, the first teams of war crimes prosecutors, both Ukrainian and international, gained early access to begin investigating the vast swathes of recently liberated territory.

They said initial indications were that widespread atrocities appear to have taken place.

Nigel Povoas, a British lawyer who went to the newly recaptured territory as part of an international team helping Ukraine with war crimes investigations, said the long Russian occupation of such a large area meant atrocities there were likely to have reached “an unprecedented level of horror”.

But perhaps there’s one hint. Throughout his tenure, Putin has consistently invited NATO and its allies to blink. At this crucial time, the West owes it to Ukraine, and for the sake of its own credibility, to ensure it does not give the Russian president what he wants.

Source: With his army on the back foot, is escalation over Ukraine Vladimir Putin’s only real option?

Ukrainian forces kept pushing north in the Kharkiv region and advancing to the south and east of the country after the swift fall of Russia’s main bastion in the north-east, Ukraine’s army chief says.

Ukrainian President Volodymyr Zelensky hailed Russia’s retreat from the city of Izium in the Kharkiv province as a breakthrough in the six-month-old war, saying this winter could bring more rapid gains of territory if Kyiv can get more powerful weapons. 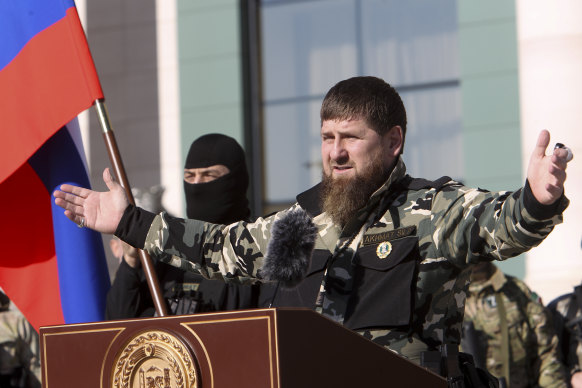 Russian nationalists called angrily on Sunday for President Vladimir Putin to make immediate changes to ensure ultimate victory in the Ukraine war, a day after Moscow was forced to abandon its main bastion in northeastern Ukraine. May, Russian forces occupying the village told residents that a corridor had been opened to Ukrainian-controlled territory. Nataliya and others boarded a bus that they were told was headed to Kharkiv. But when the bus stopped, she realized they were in Shebekino, a city just across the border.

“I suddenly realized that we were in Russia,” Nataliya told human rights investigators. “We didn’t even go through a border crossing.”

Russia says it has 2 mill troops. How many can they move feed and cloth with the onset of winter? How many can the convince their war is righteous? They lost and were demoralised by the Afghans and Zelensky learnt that it isn’t numbers that count but resolve.

In a late-night address on Monday, Mr Zelensky called on Russian forces to go home or be chased home.

‘‘If they want to survive – it’s time for the Russian military to run away. Go home,’’ he said.

‘‘Ukraine is taking back its own (land),’’ Mr Zelensky said, adding that he would not disclose Kyiv’s precise battle plans, but that his armed forces were doing thei

paratrooper, 34-year-old Pavel Filatyev – a professional soldier from a military family – published a 141-page account of his two months in Russia’s 56th Guards Air Assault Regiment at the outset of the invasion of Ukraine.

His commander is seldom seen. The regiment’s trucks have no working brakes. The overcrowding of the field hospital is solved with an order that no more casualties will be accepted.

Filatyev describes his regiment as being in a state of anarchy. Eventually, men start shooting themselves to be allowed to leave the front.

It is 187 days since Russia invaded Ukraine, ostensibly to “liberate” the eastern Donbas regions. Alan Austin assesses the cost of lives — so far.

Russia may defeat Ukraine — but at incalculable human cost

Sergei Sreda, a Russian propagandist, posted photos online of his visit to a Wagner Group base in Donbas. One small problem though: he forgot to cover the street signs. A simple geolocating later and HIMARS missiles were sent. The result? Upwards of 100 mercenaries blown to smithereens. Sreda later deleted the post of his “visit” to the Wagner military headquarters.

“Some countries will cope and get through it, while other countries will have revolutions and coups. It will be very destabilizing, and I don’t think we’re at the worst of it yet.”