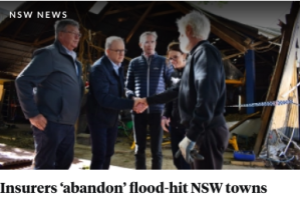 Insurers are killing towns not the climate

People living in the central-western NSW town of Forbes are reportedly being abandoned by insurers in the midst of a major flood disaster.

Forbes Mayor Phyllis Miller said some people with existing policies had received letters saying they would not be renewed, while others said insurers refused to covered them to begin with.

Ms Miller accused insurers of applying blanket bans on flood policies for the entire town, regardless of their actual flood risk.

“Of course, all of the town does not flood. We have hills in Forbes,” Ms Miller told ABC TV on Tuesday.

“There’s a moratorium on giving flood insurance to anyone [in the Forbes postcode].