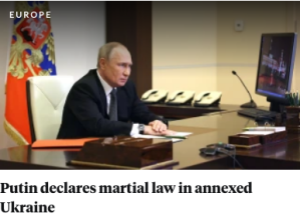 Ukraine’s foreign ministry said the martial law crackdown was an attempt “to suppress the resistance of the residents” who oppose the Russian occupation. “Putin’s decree is null and void. It has no legal consequences for Ukraine and its citizens, as well as for the international community,” said a statement released by Ukraine’s Ministry of Foreign Affairs.