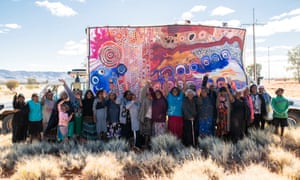 When Art became an organized industry and entrapment (ODT) 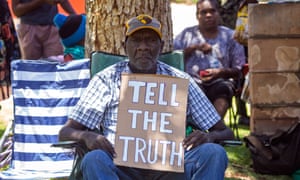 Who shoots someone and then doesn’t take them to a medical facility? (ODT)

Two officers had entered a home in the community, 266 kilometers northwest of Alice Springs, early Saturday evening to arrest Walker for alleged property-related offences, police said. After an altercation, Walker was shot and then taken to the police station instead of a medical facility. Family were told Sunday that he was dead. 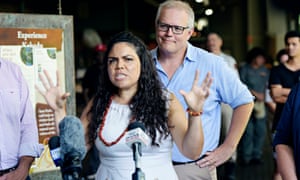 The Liberal senator James McGrath and the former Liberal candidate Jacinta Price have fronted an Institute of Public Affairs advertisement attacking any proposal for an Indigenous voice to parliament, claiming it will divide Australians by race.

The inflammatory intervention comes just a day after the minister for Indigenous Australians, Ken Wyatt, launched a co-design process with Indigenous people on the voice to parliament.

The negative advertising suggests the rightwing thinktank and aligned Coalition conservatives will continue to campaign against a voice despite the government’s repeated efforts to signal that the First Nations representative body will be legislated rather than enshrined in the constitution. 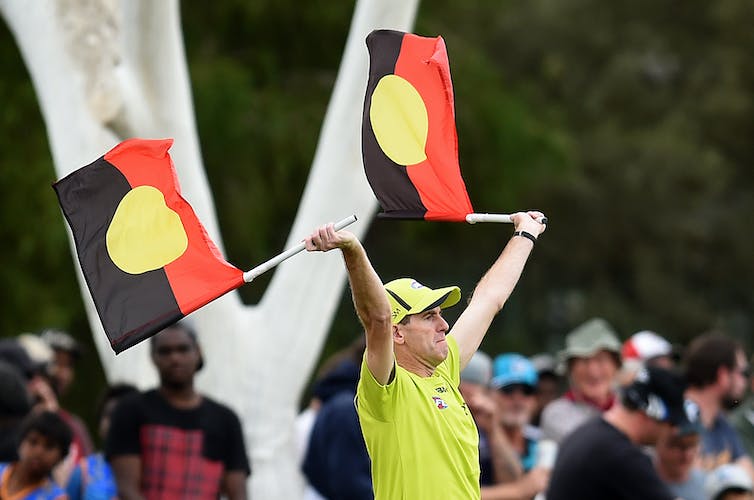 Today, the licence to use the flag on items of clothing is held by WAM Clothing. This was granted by Thomas in October 2018.

One of the owners of WAM Clothing, Ben Wooster, is also the director of a company called Birubi Art. Last year, the Australian Competition and Consumer Commission brought legal proceedings against Birubi for its production and sales of boomerang and other souvenir products featuring visual images and symbols of Aboriginal art, all of which were produced by artisans in Indonesia.

The Federal Court found that by representing these works as hand painted or made by Aboriginal Australians, Birubi had engaged in misleading and deceptive conduct. A hearing on the penalties and orders against the company will be held this Friday, but it is already in liquidation, which could limit the impact of any orders.

via Explainer: our copyright laws and the Australian Aboriginal flag

Andrew Bolt insists they are their own problem and is ready more harshly than history has treated them already. They certainly aren’t part of his culture or team that hasn’t changed substantially since 1788. (ODT)

via ‘This is a Crisis’: Aboriginal leaders want action on Indigenous youth suicide | NITV 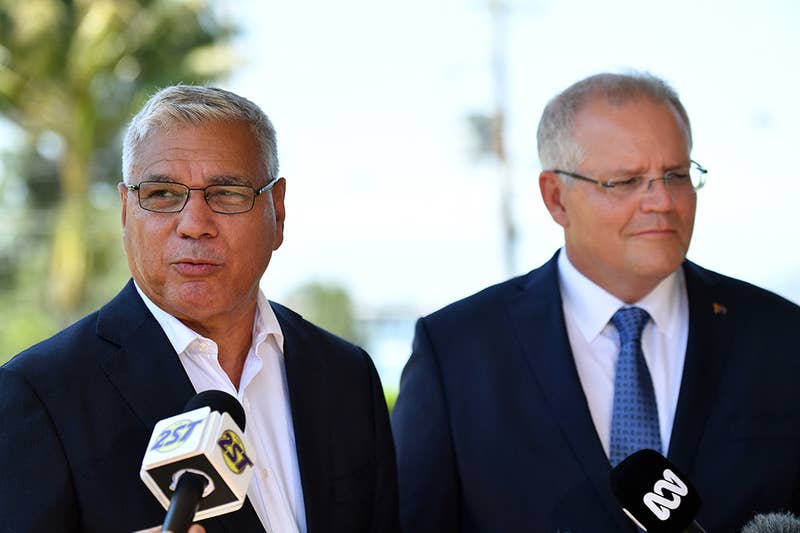 The government decided to contribute funding to a Sky News show hosted by Warren Mundine after Mundine approached the office of Indigenous affairs minister Nigel Scullion, Senate Estimates heard on Friday afternoon. There was also no clear guideline to measure the show’s success when deciding to double the funding for a second season, to an overall total of $330,000.

BuzzFeed News revealed in January that the Coalition government gave Mundine’s company $220,000 in 2018 as a grant towards funding his show, Mundine Means Business, on the cable TV news network, following an earlier award of funding in 2017.

In Jan. 2019 Mundine was announced as the new Liberal candidate for the marginal NSW seat of Gilmore, replacing the previously pre-selected candidate Grant Schultz.

“You can see the problem, though, can’t you?” asked McAllister. “What has taken place is that a person who is known to be very close to the prime minister, is sitting on the Prime Minister’s Indigenous Advisory Council, receives a direct grant which no other person was able to apply for, to develop a television program to raise his profile, and then that person nominates as a candidate for the Liberty party. I think the use of public resources in this way is totally unacceptable.”

via The Government Spent $330,000 On Warren Mundine’s Sky News Show As Linda Burney MP put it: “Leadership in an Aboriginal cultural context is not given or measured by how much media you get or if you earn big money. True Aboriginal leadership does not come from high-level appointments or board membership. It doesn’t come from and cannot be given by white constructs. Leadership is earned; it is given when you have proven you can deal with responsibility and you understand that responsibility’.”

Aboriginal people are not one homogenous mob and we must listen to different ideas but ignoring root causes and suggesting that Aboriginal culture itself is to blame is a cop out.

The preselection of Warren Mundine and Jacinta Price is a reward for their advocacy of “old white fella” policies.

They have chosen the comfort and support that comes from aligning yourself with those who hold and wield the power whilst seemingly blaming Aboriginal people for their own oppression.

Whilst they might speak about issues affecting Aboriginal communities like domestic violence and unemployment, I have yet to hear either of them offer any recognition of how the past has influenced the present let alone any positive suggestions on how to create change for the future.

Last year, 165 Indigenous Australians died as a result of suicide. Despite continued efforts to improve suicide prevention programs, there has been no no appreciable reduction in the suicide rate in ten years.

While suicide is the 14th leading cause of death for non-Indigenous Australians, it is ranked fifth for Aboriginal and Torres Strait Islander people.

We often equate suicide with mental illness, but as a recent Senate inquiry report into rural mental health found:

This statement should not be a surprise, but it is all too easily forgotten. A diagnosis of mental illness is only one of a number of risk factors for suicide.

via It’s despair, not depression, that’s responsible for Indigenous suicide

via How might an Indigenous voice to Parliament work? Here’s some ideas from Nordic nations – Politics – ABC News (Australian Broadcasting Corporation)

But the amateur fishing group revealed two weeks ago it received funding from the government without ever asking for it, as calls for a full investigation increased.

But the scheme has been criticised over how much funding goes towards Indigenous people, and a lack of transparency. 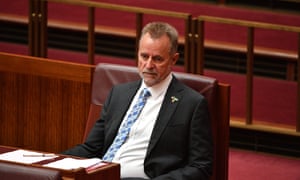 Indigenous groups are calling for a full investigation into Nigel Scullion’s “totally inappropriate use of Aboriginal-earmarked funds”, following revelations that as minister he approved grants to NT lobby groups to argue against land claims.

Tony Abbott special envoy says Education comes first change their Culture and the Economics will follow. Surely Jobs and economic opportunity come first when families are concerned? Social Welfare and Churches have spent generations removing children for “education” and have accomplished nothing but successfully destroyed families and culture leaving many indigenous without opportunity impoverished and fully aware they aren’t equal in Australian eyes. Sending the Mad Monk as special envoy is fraught with danger for the indigenous not Abbott. (ODT)

In remote parts of Australia, the gap has actually widened since 2011.

Governments have relied on a series of employment programs to tackle the employment gap, but these have not yielded positive outcomes. Before the new program starts in 2019 we need more evidence of what does and doesn’t work.

There has been no robust evaluation of the last two employment programs. Evidence of what does work might help us finally start closing the gap. 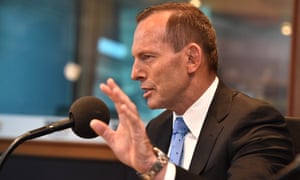 Insulting Indigenous Australia. If he’d been made special envoy to women there’d be an out cry. What about special envoy to the Muslim Community. What would that have done. This no step to Reconciliation at all. Let’s face it Indigenous Australia requested a special council established of their democratic choosing and were refused recognition. Instead they have been appointed Abbott. (ODT)

Labor’s shadow Indigenous affairs minister, Pat Dodson, said that Abbott had a track record that shows he is “ignorant, hopeless and frankly offensive” on Indigenous issues.

“The suggestion that Tony Abbott could act as some kind of messenger or representative for First Nations people is condescending to the overwhelming number of Aboriginal and Torres Strait Islander people who support the calls for a voice to parliament and a Makarrata commission to oversee truth-telling and agreement-making – both of which Mr Abbott has not supported.” ‘Correctional Services’ is a euphemism often used in Australia. Don Dale Youth Centre revealed itself in time as a place of torture. The Centre had been built in 1991 to detain young male and female offenders from across the Northern Territory. It provided ‘medium and high level’ detention, usually in single cells. 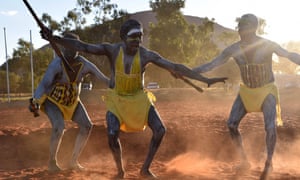 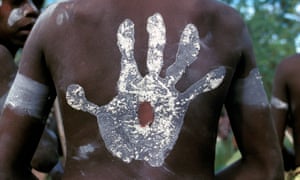 Source: Poverty must stop being used as a political weapon to separate Indigenous families | Natalie Cromb | Opinion | The Guardian 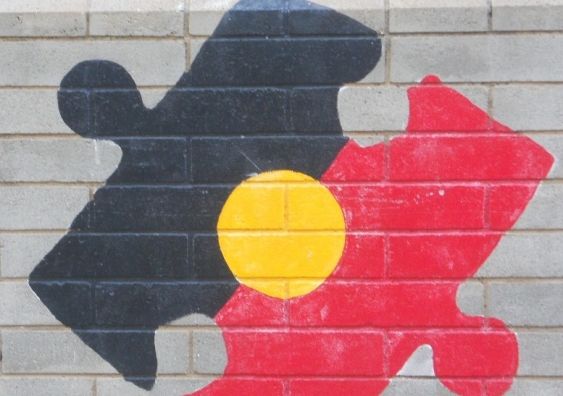 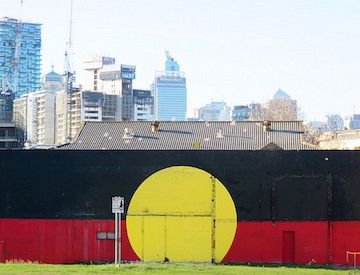 Its minuscule Indigenous budget continues the Coalition’s paternalistic policy and doesn’t even begin to address 229 years of oppression.

Facing electoral annihilation and media pressure, the Howard Government launched an unprecedented assault on Aboriginal rights and communities. A decade on, Senator Rachel Siewert says the federal government is still hiding behind its failures. I’ll never forget the day the Government announced the Northern Territory Intervention. It was a decade ago and I had beenMore 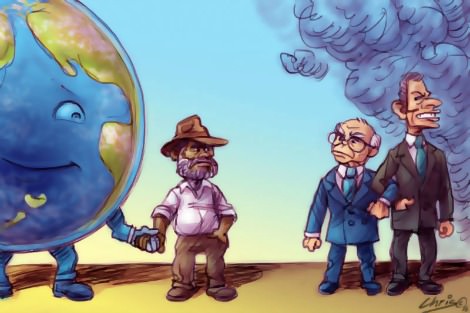 When I read this week that Tony Abbott and John Howard will hear no talk of a Treaty with Aboriginal Australia, my first thought was ‘Who listens to these blokes from ancient political history?’ Abbott conceded that it is important to recognise Indigenous Australians were here first, ‘But once it goes beyond that I think you open up all sorts of other things.’ That is true, and those other things to be opened up are incredibly legally exciting and relevant to our times. By Bronwyn Lay 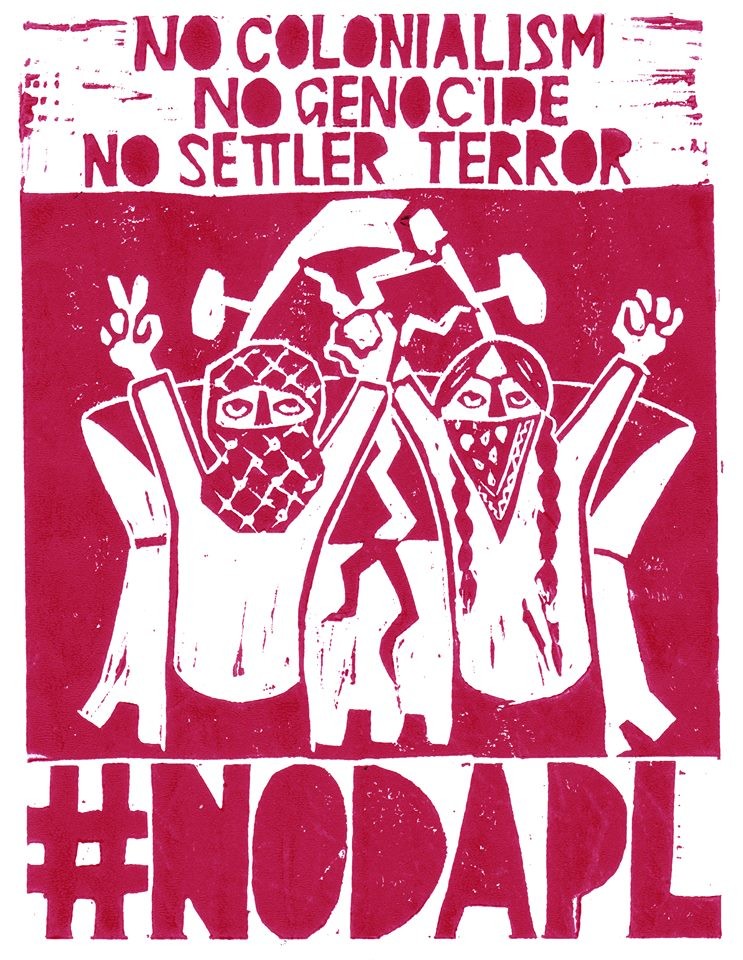 Source: Palestinians back Standing Rock Sioux in “struggle for all humanity” | The Electronic Intifada

Stan Grant strides towards me. It is easy to see why the television camera so loves his face. We meet at the plush Sofitel Hotel in Melbourne, where tea is poured from an elegant pot. Halfway through our conversation, the NSW honorary consul for Mongolia comes up for a chat. He seems in awe of Grant and tells him that his children are great fans: they’ve watched his speeches on YouTube. He thanks Grant for appearing on TV with him once. “Give my regards to President Elbegdorj,” Grant tells him.

Source: The advocate: On Stan Grant’s radical hope | The Monthly

By Vanessa Kairies Watching the Abbott publicity machine in action this week has been sickening. Visiting cows in his freshly pressed suit was just the beginning. Clueless! Off he jetted to his annual ‘community visit”. “While I’m here” he thought, “I’ll visit Eddie Mabo’s grave site on Murray Island”. It was abhorrent. Eddie Koiki Mabo…

The world’s oldest and largest collection of rock art – the Burrup Peninsula, or Murujuga, on the Dampier Archipelago – has been deregistered as a sacred site under new guidelines to the Western Australia’s weak Aboriginal heritage laws, which state there must be evidence of religious activity to qualify it as a ‘sacred site’. The change has led to questions about whether the art will be reinstated to the cultural heritage register following a successful Supreme Court decision that ruled against the WA government’s definition of a ‘sacred site’.

The connection which Aboriginal people have to the land is not simply a ‘lifestyle choice’, but rather its the very thing which connects us to our ancestors, land and culture. The unbelievable notion to close aboriginal communities in WA shows a complete disrespect for First Nation People.

We call on the Western Australian Government to reconsider this decision!

Recognise and the Government agenda

87% of Indigenous people do not agree on recognition. You’d know if you listened