So the rabble that is the federal Opposition will remain aloof from the jobs and skills summit, declining the opportunity to contribute to policy formation – if they have anything to contribute – preferring to remain remote to whinge, playing to their rusted-on base instead of the nation’s benefit.

And thus the Dutton opposition perforce marks itself as unfit for consideration as alternative government. It doesn’t care about the country, about our future.

It lacks any sense of integrity. It’s only in it for the mates, for the vested interests, for the lust for power, for the keys to The Lodge.

And that is a bad thing for us all. We get better government when there is good opposition, challenging, improving.

The Dutton opposition has left the building. It has nothing to offer.

“The key lesson from WA Inc was that the shonks, crooks, spivs and conmen only really thrive with the assistance of the professional classes – the accountants, lawyers, valuers, journalists et al.

“It took at least a culture of acquiescence and, more likely, one of mercenary complicity for the likes of Bond and Connell to prosper.”

I wrote those paragraphs 14 years ago in a chapter on another WA-based fraud story, the Firepower scandal.

They are resurrected in light of Rio Tinto settling its tax avoidance bill with the ATO last month – close enough to $1 billion worth of tax it attempted to dodge on the vast fortune it has made exporting WA iron ore and funnelling the money through its “Singapore marketing hub”.

“Singapore marketing hub” might make it up there with “colourful racing identity” as a useful euphemism.

This election was simply about the arrogance and corruption of the Morrison Government and its backers. As long as Morrison,Dutton, Ley Taylor Cash, Tudge, Hawke,and Robert remain in the Liberal Party it will never be regarded as anything but, a bunch of arrogant and corrupt maggots who dislike each other.

It was the Morrison government’s arrogance that it thought it could simply dictate to the electorate what the Liberal and National parties’ sponsors wanted it to be, along with buying votes through unprecedented corruption and abuse of power.So don’t panic even if you’ve drunk the Kool-Aid about a Labor government being a threat to civilisation. In the end, the centre wins.

If the Reserve Bank does not increase interest rates on Tuesday, it will be perceived as having surrendered its independence, the governor in Josh Frydenberg’s pocket. 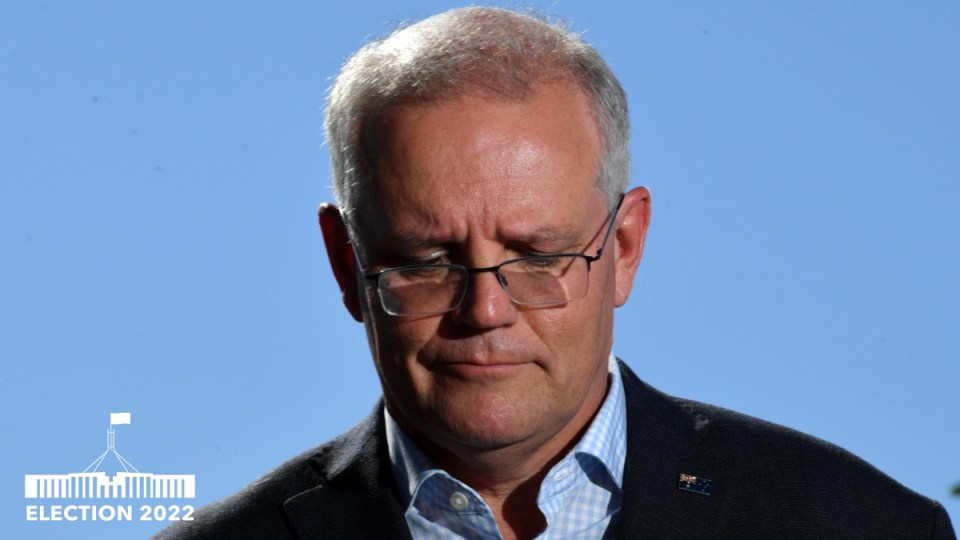 What we don’t care about according to the LNP and MSM.

It seems the most extraordinary story: Seven Coalition MPs on the record “have hit back at criticism of Scott Morrison’s broken promise to deliver a federal ICAC, declaring voters aren’t raising the corruption commission”. It also seems like a story successfully promoted by “Coalition sources”. To paraphrase, “the punters don’t care about integrity in government, so we don’t need to”. As far as excuses go for not delivering the integrity commission promised four years ago, it is pathetically, miserably, depressingly weak, albeit still better than Scott Morrison’s actual excuse: “It’s Labor’s fault.”

Source: Michael Pascoe: The election campaign is silent on the biggest issues

Scott Morrison is gone. Anthony Albanese will win the election. Josh Frydenberg is fighting to save some of the furniture. There, it’s been said. The commentariat generally is too scarred from getting the 2019 election wrong to call it, carefully hedging their collective bets. Something similar happened in 1996 after Paul Keating’s surprise 1993 “true believers” victory, but the polls and the national mood have had enough of the Morrison government in 2022 as they had had enough of the Keating government in 1996. The majority of the electorate perceives the Coalition as tired, cynical and short of talent after nine years in power – not fit for purpose.

Media staged politics is at the expense of humanity and everything decent. The history of Morrison’s cruelty will be on display. The ABC has seemingly been promised some money back that was taken away after Morrison’s win as it was after Abbott’s. It’s par for the LNP.

The Biloela Family will be used in Morrison’s cruel plan to advertise a false fact “I’m not the man they say I am”. These people have been held politically captive to be released for just this sort of event. We have to remind ourselves, Morrison is simply looking to stop a small % swing against him in marginal electorates. He’s not trying to influence the whole country. So Religious Discrimination stays, ICAC goes, humanizing Morrison remains a priority according to the polls. So acts like this will and must remain on the agenda no matter how calculating they seem to the majority of us. There will be very Australian not a French polish used and it’s coming our way. However, what lies beneath won’t change.

The good news: I’m quietly confident the Biloela family will be “home to Bilo” before the election. The bad news: They should have been there years ago. The despicable news: The timing of their release is being delayed for political theatre, the staging of a “Liberal moderates acting tough, achieving change” pantomime.

Morrison pointed out that 66% of the Covid Deaths in Aged-Care were among the ” already near dying”. That seems his justification for not increasing the cost of labor but importing “cheap ” to keep the pressure on and shut the unions up. It seems like Abbott he wishes nature would take its course. So, case settled there’s no real need for him to intervene and lose voters it’s the natural course of events. The outcry of his inaction was there before Covid the virus has merely brought it into view and magnified it. His Minister Colbeck reflected that L-NP attitude. His solution has even magnified it more. The offer of an $800 two week bonus payment with strict conditions attached over a  4 month period amounts to a generous $0.77cents an hour bonus in reality. Morrison really seems to be a character out of a Dicken’s novel rather than Australia’s PM. “Scott sir. can I please have a little more dignity”

Mr Morrison’s miserly “retention bonus” in the face of a supply crisis reeks of a government determined to import cheap labour as soon as possible to solve its problems.

So Iran, a country with which we were enjoying warming relations until Donald Trump poisoned them, is up there with China and Russia as a threat to Australia in the opinion of the National Security Committee. Barnaby Joyce reminded the media the ‘‘reason we have a National Security Committee is because it’s secret’’. Photo: AAP The possible insight is that such a perception betrays the entirely American-centric nature of our security and defence outlook. It underlines our client state status that Iran-Saudi and Iran-Israel tensions were a consideration in signing open cheques for nuclear-powered submarines. After our participation in the Iraq and Afghanistan debacles, the Morrison government apparently maintains an interest in Australian military involvement in the Middle East.