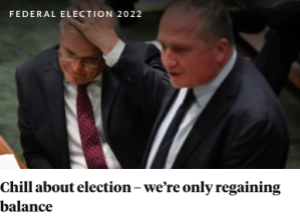 This election was simply about the arrogance and corruption of the Morrison Government and its backers. As long as Morrison,Dutton, Ley Taylor Cash, Tudge, Hawke,and Robert remain in the Liberal Party it will never be regarded as anything but, a bunch of arrogant and corrupt maggots who dislike each other.

It was the Morrison government’s arrogance that it thought it could simply dictate to the electorate what the Liberal and National parties’ sponsors wanted it to be, along with buying votes through unprecedented corruption and abuse of power.So don’t panic even if you’ve drunk the Kool-Aid about a Labor government being a threat to civilisation. In the end, the centre wins.