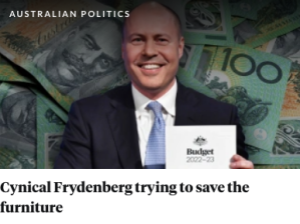 Scott Morrison is gone. Anthony Albanese will win the election. Josh Frydenberg is fighting to save some of the furniture. There, it’s been said. The commentariat generally is too scarred from getting the 2019 election wrong to call it, carefully hedging their collective bets. Something similar happened in 1996 after Paul Keating’s surprise 1993 “true believers” victory, but the polls and the national mood have had enough of the Morrison government in 2022 as they had had enough of the Keating government in 1996. The majority of the electorate perceives the Coalition as tired, cynical and short of talent after nine years in power – not fit for purpose.