A severe anti-government swing in this Saturday’s Canning byelection could kick-start a fresh attempt to replace Tony Abbott with Malcolm Turnbull.

In all, Australia is engaged in a shameful, degrading and illegitimate method of determining the fates of asylum seekers. It cannot hold its head high in regards to one intake of refugees while many others languish in prisons of the government’s making.

Australia remains the only country sending Security personnel to vet choices made by the UN on who are the most in need. Will there any transparency in this process or will it become another secretive operational matter?

Source: The dark side of Australia’s refugee policies

The Syrian refugee crisis has become the story of the week. The images of hundreds of refugees streaming off ferries, dozens in unseaworthy vessels, and endless lines walking along rail-line tracks toward Germany in search of a new life, have flooded our television news services. In Australia, particularly on social media, the debate is in…

Source: Has Abbott found his 9/11? – » The Australian Independent Media Network

Tony Abbott has more to lose from the Canning by-election outcome than Bill Shorten, but both men have stooped to either whipping up foreigner-anxiety or appeasing xenophobia in order to maximise their party’s vote. 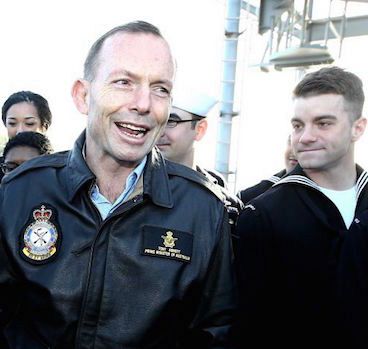 The Sleepy Rural Electorate That Could Topple The PM

Liberal MP Don Randall, who died of a heart attack in July, had a lead of almost 12%, but the latest Newspoll shows that margin has all but disappeared.

The poll, which surveyed 508 Canning voters last weekend and was published by the Australian, shows the government ahead by 51% to 49% in two-party-preferred terms. At the last federal election in 2013 it won with 61.8% to Labor’s 38.2%.

A couple of weeks ago, I wrote Brilliant Abbott Strategy – The Best Way to Stop People Talking About Your Last Mistake Is To Make Your Next. As with much of what I write, people mistook it for satire, not realising that it had been leaked from Cabinet. Well, when I say “leaked”, I mean that…

Source: Move Along – Nothing To See But The Hyperventilating Left – » The Australian Independent Media Network

Source: Another near death experience for Tony Abbott, or worse? • Inside Story

Almost half of those enrolled to vote in the Canning by-election are aged 50 and over, reflecting the high number of retirees in the WA electorate.

Canning pre-selection; strategic or the best person for the job? – » The Australian Independent Media Network.