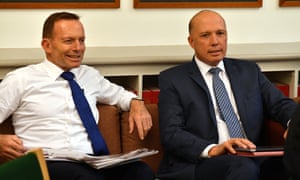 A severe anti-government swing in this Saturday’s Canning byelection could kick-start a fresh attempt to replace Tony Abbott with Malcolm Turnbull.

Abbott will punish Victorians if they give Labour the mandate. He is the Bouvver Boy an extortionist. Tell the man where he can go

The Prime Minister has warned Victoria’s Labor leader the state will not get $3 billion in federal funding for Melbourne’s East West Link if he keeps an election pledge to scrap the road project.

Tony Abbott wrote an open letter to Daniel Andrews and Premier Denis Napthine to say the money would only go to Victoria if the road was built.

“I want to make it absolutely clear to the people of Victoria that the $3 billion the Commonwealth Government has committed to this project is for one purpose and one purpose only – and that is to build the East West Link,” Mr Abbott wrote.

“If a future government is not prepared to spend the money on East West Link, then that money will not be forthcoming from the Commonwealth.”

But Mr Andrews said he would seek to work with Mr Abbott to convince him to fund Labor’s infrastructure priorities.

“I look forward to sitting down with the best of intentions, in a respectful way, having a discussion with the Prime Minister about how we might all work together to help him deliver on his commitment to be the infrastructure Prime Minister,” he said.

Treasurer Michael O’Brien said the Prime Minister had made his funding intention clear.

“The money was only provided to Victoria for East West Link,” he said.

“It wasn’t provided as a no strings attached grant.

“It’s not available for other projects, and we’re already seeing other states including New South Wales sniffing around trying to get that money.”

Mr O’Brien said Mr Andrews would not be able to convince Mr Abbott to spend the money on public transport.

“The Federal Government has made it quite clear that it is interested in building the roads of the 21st century,” he said.

(Tony Abbott) is trying to help his best mate in Victoria, Denis Napthine.

“Daniel Andrews cannot expect the national government to change its policies because he has a reckless threat to rip up East West Link contracts.”

The Coalition said Victorian taxpayers would be liable for $1.1 billion in compensation if Labor kept its promise to abandon the East West Link.

But Labor was adamant the consortium building the road would not get a payout because the contract was invalid.

Mr Andrews said he was not surprised Mr Abbott had reaffirmed his position so close to the election.

“No-one would expect him to say anything different,” he said.

He conceded the Coalition faced a tough battle to stay in government, but was confident voters would back Dr Napthine.

“I’ve seen polls on the eve of an election before turn out to be completely wrong, and it’s pointless and a waste of time to speculate about outcomes when the election has not been resolved,” he said.