Ok, first we had those people trying to impose Safe Schools on our children. If God had meant schools to be safe, he wouldn’t have invented bullies. While that was bad enough, today I read a story about an overseas celebrity trying to impose a radical Marxist philosophy on all of us. Apparently, Ellen DeGeneres…

Together with his footsoldiers in politics and the media, Tony Abbott has succeeded in muddying the public’s understanding of climate change.

When Adani built a coal port and power plant in Mundra, India, the damage was astonishing. It destroyed the environment that had sustained local fishing and farming businesses for generations. Those villagers are now bravely speaking out against Adani, and they send a warning to Australia – don’t trust Adani.

Right now, the new Queensland Government is looking at Adani’s suitability to operate in Australia. Please share this video to spread the word that Adani are not fit to operate anywhere, let alone the Great Barrier Reef. 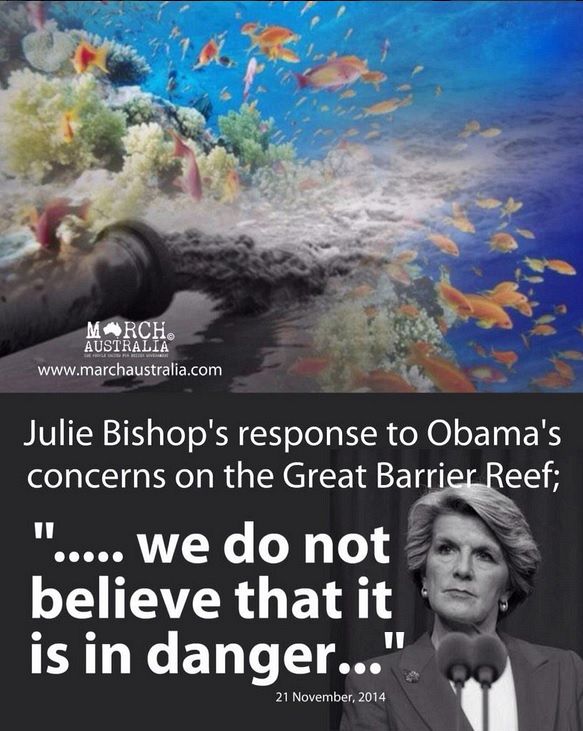 New York: Julie Bishop has rejected Barack Obama’s assertion that the Great Barrier Reef is under threat from climate change in a further sign of the Australian government’s displeasure with the US President’s speech that overshadowed the G20 in Brisbane.

But world leading scientists have rejected Ms Bishop’s claims, pointing out that rising temperatures threaten the reef with mass bleaching, while fragile ecosystems will suffer due to increasing concentrations of carbon dioxide in the oceans.

The Foreign Minister had previously gently chided the US President, saying she personally briefed the United States about potential threats to the reef just days before Mr Obama’s address last Saturday, but in an exclusive interview with Fairfax Media in New York, Ms Bishop went further and directly contradicted the President.

In his speech, Mr Obama warned “the incredible natural glory of the Great Barrier Reef” is threatened by climate change.

But on Friday Ms Bishop said the Australian government was already acting to protect the reef from its greatest threats, which she stressed did not include climate change.

“It’s not under threat from climate change because its biggest threat is nutrient runoffs from agricultural land [and] the second biggest threat is natural disasters, but this has been for 200 years,” she told Fairfax Media in New York.

However, Ove Hoegh-Guldberg, director of the University of Queensland’s Global Change Institute, backed the US President, saying Mr Obama was “right on the money”.

“We have one of the jewels of the planet in our possession and we should care a lot about climate and he wasn’t getting that from our leader [Prime Minister Tony Abbott],” Dr Hoegh-Guldberg said. Peer reviewed research by Dr Hoegh-Guldberg says that even global warming limited to 2 degrees will be devastating to the reefs.

Greg Hunt will plead face-to-face with World Heritage Committee members in a desperate bid to convince UNESCO not to label the reef “in danger”. (Image digitally altered) Source: CourierMail

The WHC will meet in February and prepare a draft report on Australia’s response to the loss of half the coral along its 2300km length. picture: Queensland Tourism Source: AP

ENVIRONMENT ministers Greg Hunt and Andrew Powell have flown to Europe for secret talks to stop the Great Barrier Reef being ­declared “in danger” by world heritage watchdogs.

Australian authorities fear that the label could damage the region’s $5.2 billion tourism industry and would be humiliating. The move comes just days after state and federal governments launched a huge repair plan to restore and protect the reef until 2050 – also an ­attempt to avoid the sanction. The pair declined to say who they will talk to and have been at pains to keep the meetings secret because they fear conservationist protesters will interfere in their campaign

The WHC will meet in February and prepare a draft report on Australia’s response to the loss of half the coral along its 2300km length.

The issue will come to a head mid year when a vote will be taken on Australia’s guardianship of one of the seven wonders of the nat­ural world.

Australian Marine Conservation Society spokeswoman Felicity Wishart said Australia should not turn such an important mission into a clandestine event.

“They can lobby all they like but the committee will look at Australia’s actions,” she said. “If the Government thinks spin will win the day, they are sadly mistaken.”