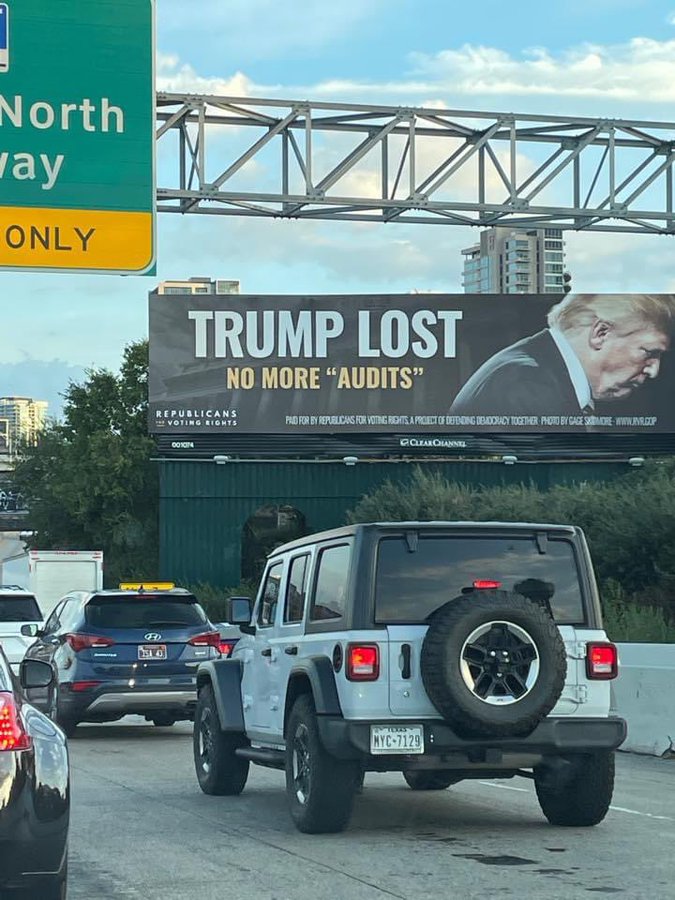 It is part of multibillion-dollar Republicans for Voting Rights campaign, which calls on state lawmakers to ‘reject frivolous audits of 2020 election results’

Source: Texas is being covered with billboards saying Trump lost – funded by fed up Republicans | The Independent 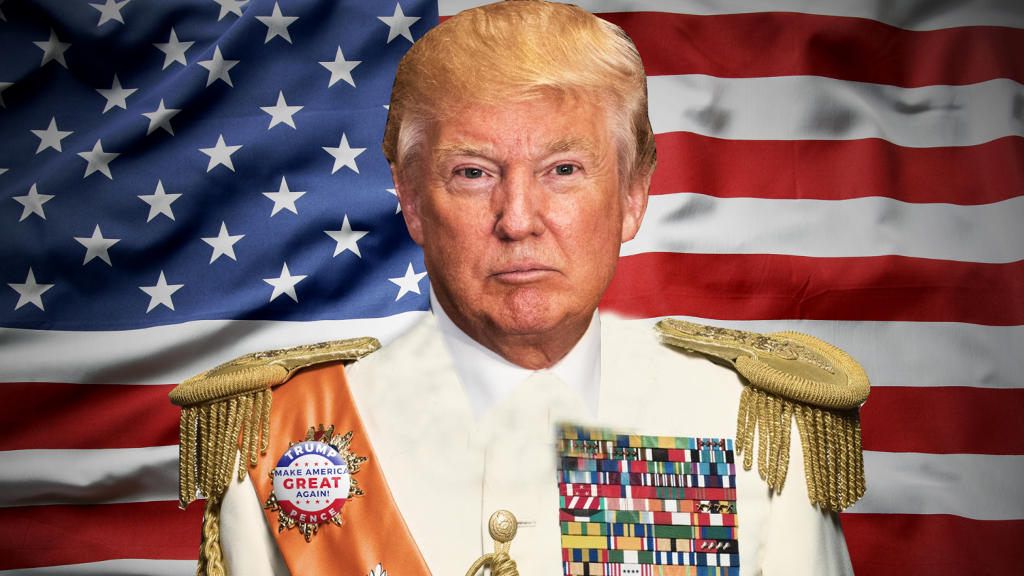 Donald Trump dispensed with even the pretense of paying tribute to workers on Labor Day. Instead his three word Labor Day Statement, blasted out to his supporters everywhere via the right-wing media machine, was blunt about his political priorities: “Fix 2020 First.”

Source: Trump, Texas, and the MAGA Drive for Power | The Smirking Chimp

The LNP would do the same if it weren’t for Compulsory Voting. The ALP is the only party that actually respects the right of all people to vote and sets out to serve us all. Yes, they make errors and Pink Bats may have been considered one but compared to the errors made by the current LNP, and where they have brought us today, the ALP’s mistakes have been trivial. The LNP’s errors, on the other hand,  have been deliberate and have rippled across not just the domestic landscape but the planet and in the worst possible of ways.

More than 40 years ago, Republican political operative Paul Weyrich told a right-wing gathering, “I don’t want everybody to vote. Elections are not won by a majority of people. They never have been from the beginning of our country, and they are not now. As a matter of fact, our leverage in the elections quite candidly goes up as the voting populace goes down.”

Source: Texas Is the New Republican Template | The Nation

Tunisia had Woman’s clinics and rights to free abortion as far back as the 1970’s. They recognized work and equal pay as well. While abortion remained illegal in most Western countries and we have a 14,5% pay gap in Australia in 2021.

A Texas Republican lawmaker on Sunday slammed the Taliban’s treatment of women even though his state has recently enacted laws stripping women of their rights. 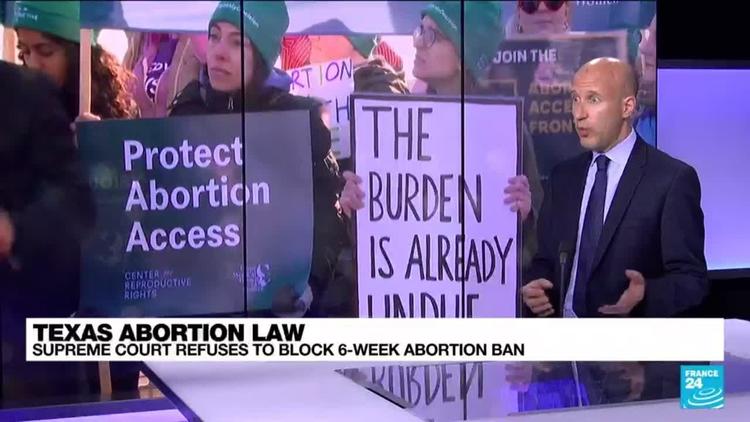 It has long been assumed that as America heads toward a future in which people of color comprise a majority of the population, it will grow increasingly difficult for the Republican Party to win elections by appealing to a shrinking base of conservative white voters.

So : Trash the notion of the REPUBLIC

As Texas becomes more diverse, conservatives have held on by shaping the electorate to their advantage.

“Governor Greg Abbott today tested positive for the COVID-19 virus,” wrote Communications Director Mark Miner. “The Governor has been testing daily, and today was the first positive test result. Governor Abbott is in constant communication with his staff, agency heads, and government officials to ensure that state government continues to operate smoothly and efficiently. The Governor will isolate in the Governor’s Mansion and continue to test daily. Governor Abbott is receiving Regeneron’s monoclonal antibody treatment.”

“Governor Greg Abbott today tested positive for the COVID-19 virus,” wrote Communications Director Mark Miner. “The Governor has been testing daily, and today was the first positive test result. Governor Abbott is in constant communication with his staff, agency heads, and government officials to ensure that state government continues to operate smoothly and efficiently. The Governor will isolate in the Governor’s Mansion and continue to test daily. Governor Abbott is receiving Regeneron’s monoclonal antibody treatment.” Regeneron’s monoclonal antibody treatment is the same treatment former President Trump received after contracting the virus last October 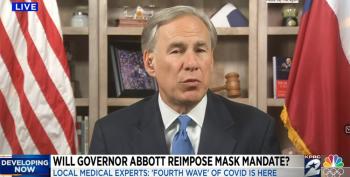 In a press release by Greg Abbott’s office, the Texas governor is asking out-of-state healthcare personnel to help with the latest COVID surge. He is also asking hospitals to forgo voluntary procedures in an effort to help those stricken with the virus. 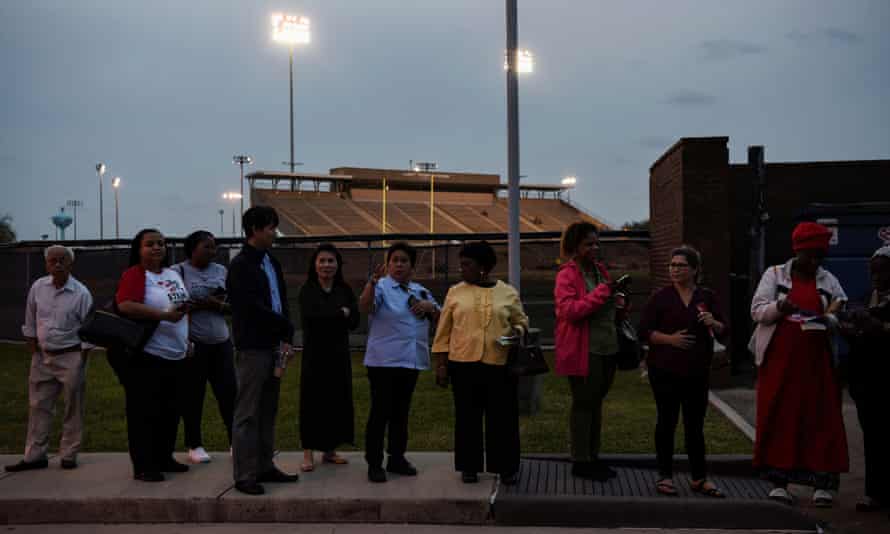 The Texas attorney general, Ken Paxton, is reportedly bringing charges that allege Rogers voted while on parole for a 1995 conviction for burglary and intent to commit theft. In Texas, it is illegal for anyone convicted of a felony to vote until they complete their sentence, including probation and parole. Rogers’ parole began in 2004 and was set to expire in June 2020. The Texas primaries were held in March. Rogers cannot afford $100,000 bail and is being held in jail, said Thomas Buser-Clancy, an attorney with the Texas chapter of the American Civil Liberties Union, which is helping represent Rogers. 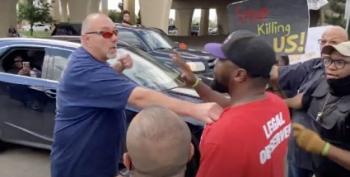 An angry white man was caught on video attacking Black Lives Matter protesters in Texas over the weekend.

Australia’s electricity market is unsustainable. Texas shows us why. A week ago Texas experienced a bout of severe weather as arctic air reached deep into the state, driving temperature down to levels that had not been experienced for 30 years. The full human toll is yet to be counted, but 20 deaths have so far been associated with motor accidents, from fires lit for warmth and from carbon-monoxide poisoning after residents used their cars to try to warm their homes. At the peak, 4.5 million people were without power in many cases for extended periods. The Texas Poison Centre received 450 calls about carbon monoxide poisoning.

Texas was a warning. Australia needs to rethink the design of its electricity market

Texas’s prevailing social Darwinism was expressed most succinctly last week by the mayor of Colorado City, who accused his constituents – trapped in near sub-zero temperatures and complaining about lack of heat, electricity, and drinkable water – of being the “lazy” products of a “socialist government,” adding “I’m sick and tired of people looking for a damn handout!” and predicting “only the strong will survive and the weak will perish.”

The Freedom to Freeze | The Smirking Chimp

The power of a competitive generation market is that each generator gets to decide for itself what makes it sustainable in the long run. That’s also a weakness of the market.

New resilient and sustainable technologies are coming online, and regulatory and market changes can always stand to be tweaked. But the most immediate and impactful change must come from new energy leadership in Texas.

Texas Blackout of 2021 Was Primarily a Human Failure | Washington Monthly

As Sen. Ted Cruz rushed back to Texas on Thursday after coming under fire for fleeing to Cancún while his constituents faced devastating power outages, water disruptions, and food shortages, an out-of-state Democratic lawmaker teamed up with a coalition of local organizations to raise money to provide direct relief for people in desperate need. Announced on Twitter early Thursday evening by Rep. Alexandria Ocasio-Cortez (D-N.Y.), the grassroots fundraising campaign brought in more than $1 million in a matter of hours—all of which, according to the New York Democrat, will go to The Bridge Homeless Recovery Center, Ending Community Homeless Coalition (ECHO), Family Eldercare, Houston Food Bank, Feeding Texas, and other local groups assisting Texans during the ongoing emergency.

AOC Raises $1M For Texas In One Day. Where Are Republicans? | Crooks and Liars

During Friday’s edition of Fox News’ Outnumbered, the panelists repeated a number of false claims about the ongoing blackouts in Texas, both in an attempt to cover up negligence by the state government and private power utilities and to deny the role of climate change in severe weather events. Fox has been waging a sustained propaganda campaign attempting to blame renewable energy sources for the state’s crisis. By contrast, local media outlets in Texas have done a much better job at explaining how the breakdowns across all energy sources — including from fossil fuels, which still normally provide a majority of the state’s electricity — are the result of the state’s failure to adequately winterize its infrastructure, even after prior blackout events. But these facts were entirely left out of the conversation on Outnumbered.

SNAKE ON A PLANE: TED IN FIRESTORM OVER CANCUN CAPER — BLAMES HIS KIDS!

While Texans struggle to keep warm amid power outages caused by historic winter weather, Sen. Ted Cruz (R-Texas) was spotted Wednesday boarding a plane for Cancun with members of his family.

Bloomberg’s advertising blitz was announced shortly after word had spread that Biden’s running mate Kamala Harris would be touring suburbs across Houston, Fort Worth and McAllen today, to shore up more support from voters.

Could Texas flip? Why the GOP stronghold is worth watching on election night

Republican Governor Greg Abbott, an ally of the President, today announced that counties in Texas can only have one location to collect completed mail ballots from voters – a move that critics say amounts to voter suppression in populous left-leaning cities such as Austin and Houston.

2020 US Election: Republicans accused of voter suppression to help Trump in Texas The decision to blacklist Airbnb had immediate impact. The University of Texas said no employee could use state funds to rent on Airbnb. Abbott similarly ordered that no public worker use Airbnb. Then, in April, Airbnb reversed the decision to remove its listings in Israeli settlements in the occupied West Bank, and in May was taken off the Texas comptroller’s list.

“The decision to stand up for human rights should have been applauded by state lawmakers,” said Meera Shah, a senior staff attorney at Palestine Legal, a group that defends the speech rights of Palestinian rights advocates. “Instead, they elected to punish the company and force its hand and force it to walk back that decision.”

via God, Gas, and Cash: How Texas Fell in Love With Israel 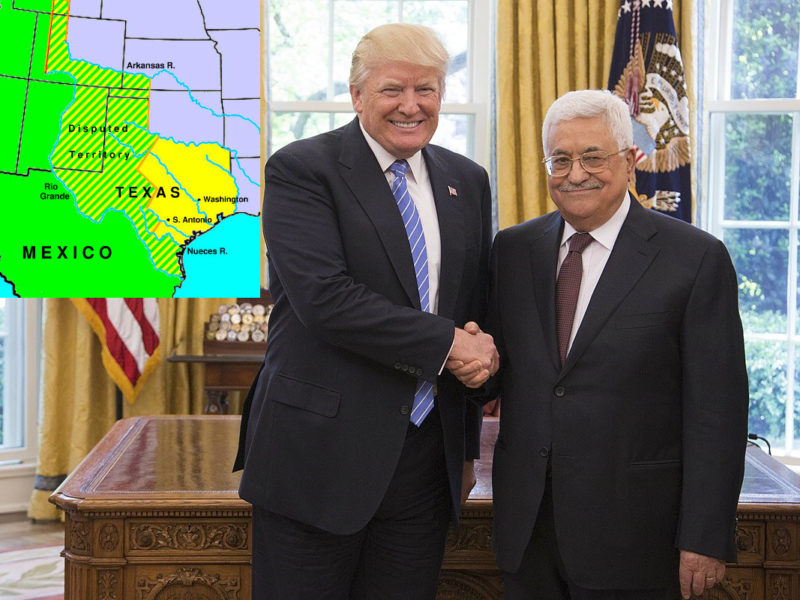 via Palestinians recognize Texas as part of Mexico – The Beaverton 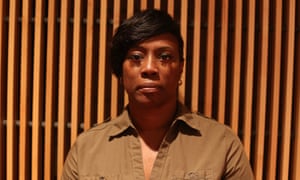 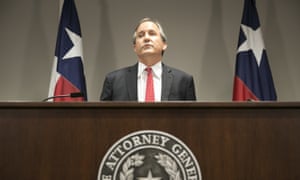 Hours after a mass shooting that left at least 26 people dead, the Texas attorney general said American churches should be “arming some of the parishioners” or hiring “professional security”.

Who is Pamela Geller, organiser of the Draw Mohammed competition in Texas?.