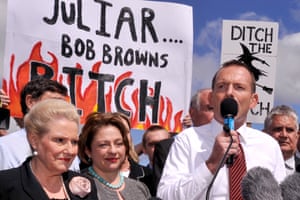 She was not the politician doing the apologising, but she was the only one the survivors really wanted.
Advertisement

Of all the politicians, Julia Gillard was the only one survivors really wanted

via Day to Day Politics: How will she be judged – » The Australian Independent Media Network

Rather than fighting a rearguard action to defend his legacy in Parliament, it would be better – for everyone – if he focused on creating a new one beyond it.

You must be so glad you voted Liberal. #notfittogovern
Was Julia Gillard the most productive prime minister in Australia’s history?
How do we measure the effectiveness of a government? There are polls, both of opinion and at the ballot box, but these don’t really offer us any measure of effectiveness. You can look at the economy and measu1re the health of the populace – and these are both good indicators – but are not wholly under the influence of the government of the day.

One way might be to look at the ability of a government to pass legislation. Admittedly this is a quantity over quality approach, but it does offer us a quantitative measure of a government, political party or prime minister. Someone that gets a lot of legislation passed might be considered to be good at getting things done.

I took all of the Commonwealth of Australia Numbered Acts and assigned them to a prime minister, political party, and parliament based on the date of assent of the act. This isn’t entirely exact, as some legislation may be introduced under one PM and passed under another, though I believe it is a good proxy.

The results? Julia Gillard had the highest rate of passing legislation with a rate of 0.495, followed by Bob Hawke at 0.491:

If Australia’s mainstream journalists had been financial advisors giving their clients the same standard of advice before the last election, they’d be in gaol, writes Tom Orren.

ANYONE OLD ENOUGH to remember Laurel and Hardy on Saturday afternoon TV (and no, I’m not old enough to have seen them at a Saturday Matinee) will remember a rather rotund Oliver Hardy delivering that catch-phrase after Stan Laurel had led him into some dire, but hilarious, situation:

“Well, here’s another fine mess you’ve gotten me into.”

They’ll also remember that Ollie was always a willing participant if ever there was something in it for him.

“What’s a catch-phrase doing in a piece about politics?”

(Apart from the obvious answer.)

To which I’d respond:

(You have to imagine me fiddling with the end of my tie as I say that.)

It’s because, every time I see or hear Tony Abbott, or one of his Liberal cronies on TV or radio, my skin crawls as I think back to the absolutely pathetic job done by our political media in scrutinising his policies ‒ no, his catch-phrases ‒ in the lead up to the 2013 election.

Actually, absolutely pathetic might not be anywhere near strong enough, culpable negligence may be more apt … present company excluded, of course. 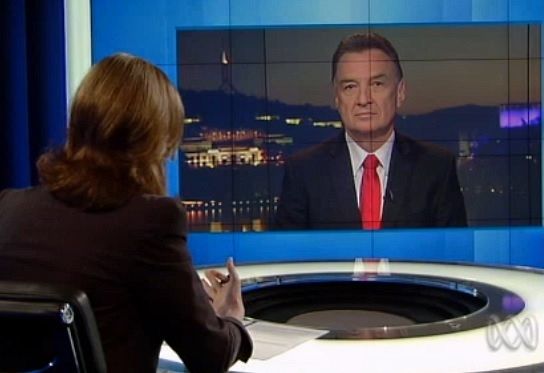 The Media and the 2013 Campaign

From 2010 to 2013, almost the entire focus of the media was on Kevin Rudd stirring up trouble in order to resurrect his Prime Ministership and the rest was taken up belittling anything that the Gillard government tried to do, or giving oxygen to the catch-phrases dreamt up by ATPC (Australian Tea Party Central) for Abbott to use.

The end result was that, all the public ever saw were bad-news stories about the ALP — criticisms, questions, suggestions, allegations, stories about infighting … and catch-phrases, of course. Anything that was in the least bit negative got a run, to the almost total exclusion of any of the good it had done.

You’d be excused for thinking that my wrath is directed entirely at the Murdoch media ‒ Foxtel, The Daily Telegraph, The Herald Sun, The Courier Mail, The Australian, The Advertiser, the NT News, The Mercury and so on ‒ but you’d be wrong.

It’s also directed at some of our more credible networks and journalists, including; the Fairfax media, various independents and even the likes of Fran Kelly, Leigh Sales and good old Barrie Cassidy at the ABC.

The nadir of this was when the normally reputable Four Corners did a piece entitled The Comeback Kid, by Andrew (What-a-way-to-end-your-career) Fowler. This was long before a Rudd comeback looked even remotely possible. In fact, it may have even kick-started it…

I could have added former 7.30 host (as well as one-time ACT candidate for the wacky “pro-life” Osborn Independent Group) Chris Uhlmann to the above list, but he has been so vitriolic towards the ALP for so long that he doesn’t deserve a mention in the same sentence.

As for Michelle Grattan, who appears daily on Kelly’s breakfast program, I just don’t know what to think. She’s supposed to be the doyen of Australian journalism, but I don’t think I ever heard her utter a kind word about Julia Gillard throughout that entire campaign. In fact, she even flat out told her to resign at one point.

During the 2013 election campaign, I was an avid listener to Radio National, in particular to Fran Kelly’s influential RN Breakfast program.

Over the course of about three weeks, I kept note of the negative mentions made of the ALP, the LNP and the Greens and the approximate ratio was around 150:30:2. That means Fran Kelly spent about five times longer bagging the ALP government than she did bagging the policies of the LNP (and almost none criticising the Greens), which had a predictable and inevitable effect.

But Fran Kelly wasn’t the only one. In fact, she was among the more balanced of them, because nearly every other news program in the country at the time, was getting its leads from the same place as Fran — the morning print media, which was (and still is) overwhelmingly dominated by the Murdoch Press.

Who got us into this mess?

So, was it News Corp that led our media astray and got us into our current ‘fine mess’?

It’s not enough to say that our media was tricked or led, because it should have known better. It should have set its own agenda and gone through the LNP’s policies with a fine-toothed comb.

It should have picked up the flaws in their arguments and their figures, and questioned many of their claims.

It should have driven semi-trailers through the web of fallacies that the LNP was spinning, but it didn’t do that either. And it should have done its due diligence.

In other words, if the country’s journalists had been financial advisors who gave such bad advice to their clients, they’d be in gaol.

While we (the voters) might try to blame the media by saying:

“Well, here’s another fine mess you’ve gotten us into!”

Because, like him, as voters, far too many of us thought that there would be something in it for us.

But it’s not just Australia that’s in a ‘fine mess’.

About half way through Thomas Picketty’s excellent (but excruciatingly long) book, Capital in the 21st Century, he makes the point that, for some unknown reason, income inequality is far greater in the English-speaking world (USA, UK and Australia/NZ) than anywhere else. He then leaves it for others to decide why.

Well, I think I can make an educated guess about why — the Murdoch media.

If you need any proof of that just think back to how quickly news of the immense bonuses paid to financial sector executives (using government bail-out funds) at the height of the GFC faded into insignificance so quickly, to be replaced by a crusade against Obama’s health care plan.

And then ask yourself:

“Which story was most deserving of a good old-fashioned media crusade?”

You might also reflect on how the recent U.S. Congressional elections went so badly for the Democrats and how most of the anti-Obama commentary during that campaign stemmed from the Murdoch media. This negative coverage has been so successful that even respected Australian commentators have begun labelling him a lame duck.

The media in the USA and the UK are no different to ours – literally – because they are largely run by the same man and they too have led their countries from one fine mess to another — from Iraq to ISIL, from lower taxes for the rich to greater financial system deregulation, and from small-government to anti-gun control.

In every case, the ring-leader appears to be one and the same.

Professor of political science at Sydney University in the 1970s, Henry Mayer, used to say,

“Whoever controls the media, controls what people think and therefore, who they vote for.”

That is a hell of a lot of power for any one person to wield.

Let’s face it, anyone who can get the country’s media to follow them around like an obedient dog is capable of anything, so only when that media frees itself of such control will we have any hope of getting out of the fine mess they have gotten us into.

The counsel assisting the Royal Commission into Trade Union Governance and Corruption, Jeremy Stoljar SC, has recommended the former Labor leader be cleared of any crime over her involvement in the setting up of an Australian Workers Union (AWU) slush fund in the 1990s.

However, the summary of submissions to the commission released yesterday said AWU officials Bruce Wilson and Ralph Blewitt ran a “sham” slush fund, of which the sole purpose was to receive money fraudulently from the Perth construction company Thiess Contractors.

Mr Wilson fronted the commission in September and admitted that his “association” sent false invoices to Thiess for a whole year in 1992.

Although it found Ms Gillard’s professional conduct to be “questionable”, the document said the former prime minister did not commit any crime and was not aware of any criminality on the part of other union officials.

It was noted by Mr Stoljar that had Ms Gillard taken a more rigorous approach, it might have been more difficult for the pair to have behaved as they did.

The interim report of the commission has not been released, but the recommendation has come from a summary of evidence so far.

Ms Bishop had previously suggested that the former prime minister had benefited from siphoned-off funds.

Labor frontbencher Andrew Leigh said members of the Coalition who accused Ms Gillard of wrongdoing in the media and in parliament should now say sorry.

“I think it might be appropriate for someone like Julie Bishop, who had accused Julia Gillard of criminality, now to issue a formal apology,” Dr Leigh said.

Coalition frontbencher Josh Frydenberg stressed that the released report is only preliminary.

“I’ve never thought this royal commission was about Julia Gillard, it’s a much more systemic problem within the union movement,” Mr Frydenberg said.

Ms Gillard, who has always denied any wrongdoing, this morning released a brief statement acknowledging the recommendation.

“Ms Gillard notes that the submission made by counsel assisting the Royal Commission into Trade Union [Governance and] Corruption states that she did not commit any crime and she was not aware of any criminality by any other person,” the statement said.

“In relation to the other matters detailed in the submission relevant to Ms Gillard, her counsel will make submissions at the appropriate point.”

New South Wales Opposition Leader John Robertson said the lack of any adverse finding about Ms Gillard is a demonstration that the royal commission is a witch hunt.

“Lawyers often have questions raised about their behaviour, and I would suggest that there are processes within the legal fraternity that should easily deal with those matters,” Mr Robertson said.

“The former prime minister was treated appallingly in the way she was pursed on this matter.

“She has been cleared, I think that’s a good thing for her and I’d like to think that she will be able to get on with her life.”