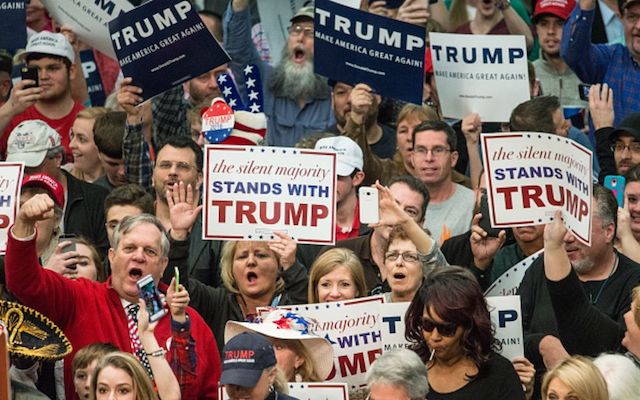 Senior Tyler Linfesty hammed it up, doing double takes or smiling knowingly when Trump told one of his famous whoppers. Trump’s handlers, alarmed by the insufficiently beatific expression on Linfesty’s face, came and got all three of the young students. They appear to have replaced them with Trump staffers. Then the staffers and the secret service agents took Linfesty to a room and kept him there for ten minutes before releasing him.

It is the kind of thing that happens in dictatorships all the time, though of course with worse consequences. But the difference is one of degree, not of kind.

Trump tries to divide Americans by ethnic group and social class and set them fighting one another in hopes of dividing and ruling. He is nasty. Having put his hands all over women’s bodies all his life without their consent and buying off the ones who objected or might blab, he is now reshaping the Supreme Court so that women entirely lose control over their own bodies to 5 male justices. Brett Kavanaugh admitted that there are no Federal laws governing any aspect of men’s bodies.

Tony Abbott has declared “coal is good for humanity” while opening a coalmine in Queensland.

The prime minister, who describes himself as a conservationist, said coal was vital to the world and that fossil fuel should not be demonised.

“Coal is vital for the future energy needs of the world,” he said. “So let’s have no demonisation of coal. Coal is good for humanity.”

Abbott said the opening of the $4.2bn Caval Ridge coalmine in Moranbah, operated by BHP Mitsubishi Alliance (BMA), was “a great day for the world”.

“The trajectory should be up and up and up in the years and decades to come,” Abbott said.

“The future for coal is bright and it is the responsibility for government to try to ensure that we are there making it easier for everyone wanting to have a go.

“It is a great day for the world because this mine will keep so many people employed … it will make so many lives better.

“This mine epitomises the have-a-go spirit,” he said.

In May, Abbott told a minerals industry parliamentary dinner he could think of “few things more damaging to our future” than leaving coal in the ground.

A month later, after a meeting with Barack Obama in June this year, Abbott said he took climate change very seriously.

“I regard myself as a conservationist,” he said. “Frankly, we should rest lightly on the planet and I’m determined to ensure that we do our duty by the future here.”

In Moranbah, the prime minister said he was proud to have abolished the carbon tax and the mining tax.

Last week, China imposed a 6% tariff on non-coking coal and announced attempts to address pollution in its cities by increasing spending on renewable energy. Last year, China spent $56bn on wind, solar and other renewable energy projects while Australia’s renewable industry slumped by 70%, due to uncertainty over the government’s intentions for the Renewable Energy Target.

On Sunday, the prime minister said he would prefer China’s coal tariff announcement “didn’t happen” and still hoped for a resolution to the Australia-China free trade agreement in November, before or at the G20 summit.

“We would prefer that this [the coal tariff] didn’t happen,” Abbott said.

“The fact that it seems to be happening makes it more important than ever that we get a good outcome to the free trade negotiations that have been going on between Australia and China now for many, many years.”

On Monday the treasurer, Joe Hockey, criticised the Australian National University for its decision to divest from fossil fuel companies.

“I would suggest they’re removed from the reality of what is helping to drive the Australian economy and create more employment,” Hockey said.