Legal experts were in no doubt whatsoever that Christian Porter had given up but News Corp madly spun the line that it was a humiliating backdown by the ABC. Michael Tanner dissects the coverage of what had been billed ‘the defamation trial of the century’.

Republicans don’t demobilize. They aren’t stupid just because they’re crazy. They know that they win by sticking together. They know that their differences matter less than their shared goal of maintaining power. No matter how baroque the conspiracy theories get or overt the fascist sentiment, Republicans aren’t going to see much attrition. Beating them will continue requiring mass mobilization on the left, as hard as that can be. The GOP is here to stay, and the sooner Democratic voters accept that, the more disciplined they’ll be at defeating them.

Forget about a GOP crack-up: Republicans rally around a defeated Trump because they understand power | Salon.com

The Liberals think anything to do with “boats” is lethal for Labor; the ALP believe community attitudes have changed but is very apprehensive about how the debate would go if boats showed up.

No question, this is rocky for Bill Shorten. The government attack is ferocious, full of exaggeration and scaremongering.

Indeed. So which un-nuanced Morrison message will the smugglers hear? That the policy has been trashed – or that the borders are being fortified?

There is also the danger, which some critics have highlighted, that in its rhetoric about numerous alleged criminals on Nauru and Manus, the government could make the US more reluctant to take people (it has only accepted 456 so far – the deal was up to 1,250).

Grattan on Friday: What does “reopening” Christmas Island actually mean and why do it? 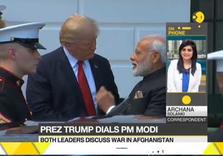 It’s about propping up “besieged majorities” in multiethnic countries.

Washington and New Delhi are having a mutual lovefest these days.

Donald Trump is popular in India — where only 17 percent of the population considers the president “intolerant,” compared to a global average of 65 percent — and he has warmly welcomed Indian Prime Minister Narendra Modi to the White House. Both leaders are eager to bump up bilateral security cooperation to the next level.

Even Donald Trump, Jr. is getting in on the act. He’s visiting India this week as part of the Trump organization’s myriad economic connections to the subcontinent. Indians, treating the president’s son as a representative of the White House, are paying a lot of rupees to gain access to his ear.

Who can blame them? It’s virtually impossible to disaggregate the different components of the Trump megaplex. “These are vexing times for conservatives,” declared Tony Abbott in his dinner address to the Samuel Griffith Society in Adelaide on Friday night.

Source: Privilege and its discontents | The Monthly

DARK clouds loomed over the Bureau of Meteorology at the height of Tony Abbott’s short-lived reign as Prime Minister.

Open Your Eyes: Read the Polls with Clarity – » The Australian Independent Media Network.