As Noam Chomsky puts it in a recent interview, “unless working people take part in the class struggle, they’re going to get it in the neck.”

Noam Chomsky: Fight the Class Struggle or Get it in the Neck

Noam Chomsky, one of the world’s foremost public intellectuals, has provided the international left with wisdom, guidance and inspiration for nearly 60 years. Proving that he operates at the locus where argumentation and activism meet, he demonstrates indispensable intellectual leadership on issues of foreign policy, democratic socialism and rejection of corporate media bromides.

Noam Chomsky: “If you don’t push the lever for the Democrats, you are assisting Trump” | Salon.com

via Mehdi Hasan and Noam Chomsky on Biden vs. Trump We looked at the institutional structures of the [mainstream] media. What are they? They are major corporations, that are often parts of bigger, mega-corporations. They have a product that they sell to a market. The product is readers of newspapers, or viewers on television, and the market is advertisers.

So they are corporate institutions that sell readers to advertisers. They are all closely linked to government. There is a lot of flow, in and out, of personnel, with a lot of influence.

And we asked a simple question, that anyone who believes in free markets would ask at once: Do the structure of the producer, of the market, and the links to other power structures, does that affect the media content? That is the propaganda model. There is nothing arbitrary about it. That is just elementary. And if you believe in free markets, that is exactly what you would look at.

Global outcry over academic freedom and human rights has erupted following news on Friday that the Turkish government of President Recep Tayyip Erdoğan has arrested at least 18 academics and scholars for signing an open letter last week calling for the end of Turkey’s brutal treatment of the country’s Kurdish people. 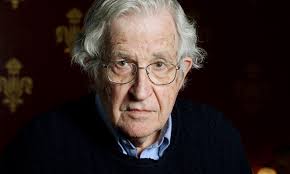 : Chomsky on Greece: A ‘Savage Response’ for Standing Up to Austerity ‘Class War’

In a talk aired on C-SPAN in March, the world-renowned linguist and political activist discusses his book of essays “Masters of Mankind: Essays and Lectures, 1969-2013” and answers questions about Israeli politics.

Chomsky discusses how he thinks the U.S. should respond to the self-proclaimed Islamic State.

Noam Chomsky: To Deal with ISIS, U.S. Should Own Up to Chaos of Iraq War & Other Radicalizing Acts | Democracy Now!.