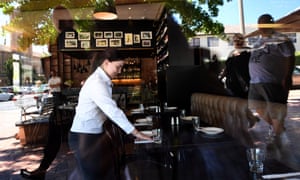 More than 15 percent of pickers, packers, movers, and unloaders are temps. They make $3 less an hour on average than permanent workers. And they can be “temporary” for years.

I Was a Warehouse Wage Slave – Mother Jones Businesses can make considerable savings in induction, training and performance management costs during the probation period, in addition to recruitment and selection savings.The PATH program enables an employer to try a number of potential employees for free. This also frees them from all the associated costs during the probationary period. Businesses are able to increase profits through the tax payer funding the PATH program. This is not the same as work experience or on the job learning, such as an apprenticeship or traineeship. This is a free labour program dressed up ‘helping the jobless who seek to work.’

If you think the government was taking us towards social and economic disasters prior to the recent Cabinet reshuffle, well you ain’t seen nothin’ yet, writes Ricky Pann.

The new threat to Australia is not the boat people nor the terrorists, it’s now the unemployed and those on welfare.

Scott Morrison is ferociously ambitious and a Liberal insider told me just after his rather dirty campaign for pre-selection in Cook that he has aspirations for the top job. Like Abbott, he is combatant and will say or do anything to win. This they have in common.

Tony Abbott has been scraping the bottom of the boat over the weekend and Scott Morrison has managed to land himself as the head of Social Security (ironically the SS).

So now Scott “where the bloody hell are ya” can treat the unemployed and disadvantaged with the same ‘take no prisoners’ contempt with which he treated refugees. In a recent presser he gloated that he intends to get as many people “off welfare” as he can and in light of the Abbott Government’s policies driving unemployment up; that should be an extraordinarily heinous feat that may have dire social consequences.

Kevin “onward Christian soldiers” Andrews, neanwhile, moves to defence as he is obviously not hard enough for ideologies dirty job. I am no longer surprised at all by Abbott so I predict a series of undisclosed ideological agendas will be “tried on” with Morrison at the helm.

Expect a wide backlash against the idea of these measures as Morrison, like Abbott, is about as popular in electorate polling as root canal therapy. The fight will be fought in the Senate.

There is an elitist belief deeply entrenched in this government’s socially disconnected ideology, that people on welfare should work in menial jobs as part of their social contract. Ironically this government has abandoned any sense of social responsibility to the point of disenfranchising the very people they courted before the election. The list of lies and dishonesty is becoming quite ridiculous as the gloss of “I’m a changed man” washes off in a shower of insincerity to reveal two ironically sobering points:

Quite simply, Tony Abbott personifies everything he said he would not be before the election. Abbott went into the election with no plan other than to say anything to win with a range of undisclosed agendas and social engineering masquerading as prudent conservative fiscal stewardship. Some fourteen months in, the runs are not on the board nor is the plan working. People are starting to use the “R” word and public confidence in Hockey’s ability is scathing across the political divide:

This government is arrogant and is simply not listening to the electorate. It will do so at its own peril. Abbott has always been doggedly combatant and non-conciliatory. He prefers to tough it out to grim death and apologise insincerely as a last resort on every point. He feels he has to win no matter what with no compromise. That may be fine in opposition but in government its politically suicidal. Strong leadership comes from governing for the whole electorate which is something that Abbott has not learned. Tony Abbott unscripted is awkward and stilted which is reflected in his popularly approval rating. People just don’t like him, especially the Liberal voters he has abandoned in a wave of tea party fervour.

The problem with socially disconnected elitism is you become delusionary, preferring to live in your own version of truth. This government has been extremely divisive, preferring to have a “for or against” mentality. They honestly believe that government is a mandate to do whatever they like, disclosed or not, wanted or not, necessary or not. They have waged an ideological battle with no logical outcome other than proving a point irrespective of the social cost.

It is core to their thinking that they are above criticism, which is a sign of radicalisation. They have hijacked and shifted the middle ground of centrist conservatism to the extreme right polarising the bipartisan middle ground. Moving the gold posts of where conservative starts so it is indistinguishable from radicalism. Of course this is another illusionary lie. Abbott’s front bench team is made up of mostly people who have always been radical ideologues pretending to be conservative.

Character assassination is prevalent in their tactic. Anyone that disagrees in the fiercely partisan ideology wars is a “Lefty” – the new “Commo”. This too has seeped into the mainstream where the term “Lefty” or “leftist” seems to be a common insult for anyone that questions the simplicity of complex issues reduced to sloganism in the Abbot meme so popularised by the far-right opinion writers of the Murdoch press.

Meanwhile, Hockey still thinks his budget is fair and he is doing a great job. Or at least he has been fearlessly trying to sell it that way. The numbers don’t add up; just like the social fall out. The hastily shallow government waste justification process epitomised by the productivity commission wreaks of a government that talks up empathy but does not understand its meaning. Ironically they castigated the last government for wastage then hold a commission into waste while wasting money themselves. Every aspects of policy direction for this government is rhetorically heavy and substance light. No wonder Hockey can’t find any money!

Lobbyists run the modern Liberal Party and as donors they have shopping lists with an expected a dividend.

Instead of looking at taxation equality, minimalisation, and corporate welfare and a multitude of corporate lurks they prefer to privatise and cut the services of working, tax-paying voters rather than alienate the money of corporate interest that helped them get elected. A neoconservative religious factional block controls the modern Liberal Party which has also arrogantly stopped listening to its own members – much like the divide in modern Labor. The modern Liberal Party has abandoned the ethos of conservative liberalism in favour of radicalism of the neoconservative religious tea party movement of the USA. Factional and special interest cronyism is a modern condition that is a big problem for both major Australian parties. This culture is detaching the major parties from the relevance of core constituency in favour of corporate interest run by socially disconnected elitists who have the numbers circumventing local rank and file into irrelevance.

The Abbott Government has lost its way. It’s lazy, divisive, vindictive, lacks vision and is devoid of ideas. It’s simply out of touch. It’s all the things it said it would not be, ironically. They choose to blame everyone but themselves and one must ask, “who is left to blame?”

When Tony Abbott was asked this week what was his greatest achievement as Minister for Woman’s he gleefully stated “repealing the carbon tax”. This in itself is a glaringly obvious indication that Tony Abbott just doesn’t get it, and he does not listen.

The Revelation is nigh, comrades.