Trump said, “We have hundreds of thousands of people coming in from Haiti.” That’s a lie. He continued, “Haiti has a tremendous AIDS problem. AIDS is a step beyond. AIDS is a real bad problem. So hundreds of thousands of people are coming into our country and if you look at the stats, you look at the numbers. Just take a look what’s happening in Haiti. A tremendous problem with AIDS.” What stats and numbers is he quoting? The Russian Trump Tower memos? Does Trump believe a person catches AIDS from a handshake or a cough? “Many of those people probably will have AIDS, and they’re coming into our country, and we don’t do anything about it. We let everybody come in. Sean, it’s like in a death wish. It’s like a death wish for our country!” What a garbage human being Donald Traitor Trump is. 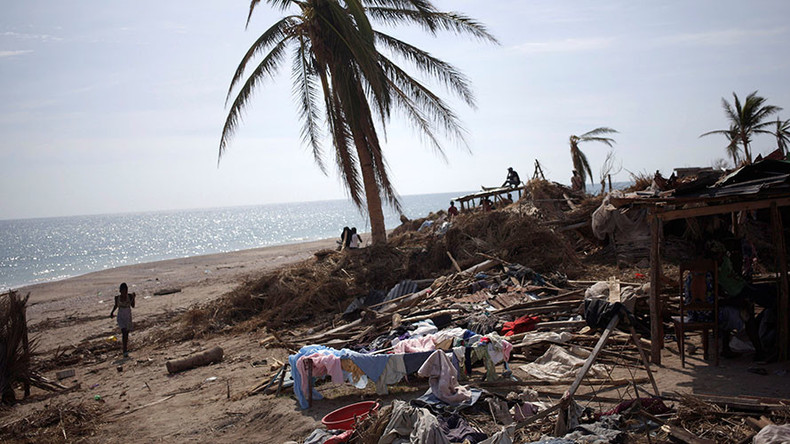 Hurricane Matthew has left hundreds dead in Haiti and thousands in need of immediate relief. However, Haitians have not been making calls for American Red Cross donations. Former Haiti development worker France Francois explained why to RT.

PEARLY GATES – (CT&P) – As part of an ongoing jihad on the people of Haiti, God has sent powerful Hurricane Matthew to drown as many innocent people as possible and set up favorable conditions for outbreaks of typhus, dysentery, and mosquito-borne illnesses such as malaria, West Nile virus, yellow fever, Venezuelan equine encephalitis, and of course Zika.

Jehovah surrogate Pat Robertson told Wolf Blitzer of CNN that the Almighty Creator of the Universe also hoped that there would be extensive damage to an already decimated infrastructure followed by a shortage of food and potable water which would precipitate sporadic outbreaks of violence leading to even more deaths.

“The Good Lord was just not satisfied with the 2010 earthquake,” said a drooling Robertson, who is thought to be about 112 years old. “Sure, he murdered around 175,000 men, women, and children, but as he said at the time, he was ‘just getting started.’”

Blitzer asked Robertson why God hated Haitians so much that he was willing to kill babies in their cribs and drain innocent people of their precious bodily fluids until they died horrible deaths while lying in their own filth.

“Well, Haitians are a bunch of voodoo-worshiping negroes,” responded Robertson, as his head lolled to the right. “God is not that fond of black folks to begin with, and when you throw in all that voodoo shit it really pisses him off.”

Robertson went on to explain that after Haiti was destroyed, the hurricane will proceed to Cuba, where it will kill a bunch of godless commies, and ultimately end up wreaking havoc in Vermont, because it’s the home of Bernie Sanders, who is a fucking socialist.

Robertson also said that Hurricane Matthew will be followed up by hurricanes Mark, Luke, and John which will meander all over the Caribbean wiping out a bunch of atheists, agnostics, and Presbyterians, because God always hated John Calvin and “that stupid predestination thing.”

According to Robertson after the hurricane season is over God plans on getting back to murdering more of those idol-worshiping Nepalese.