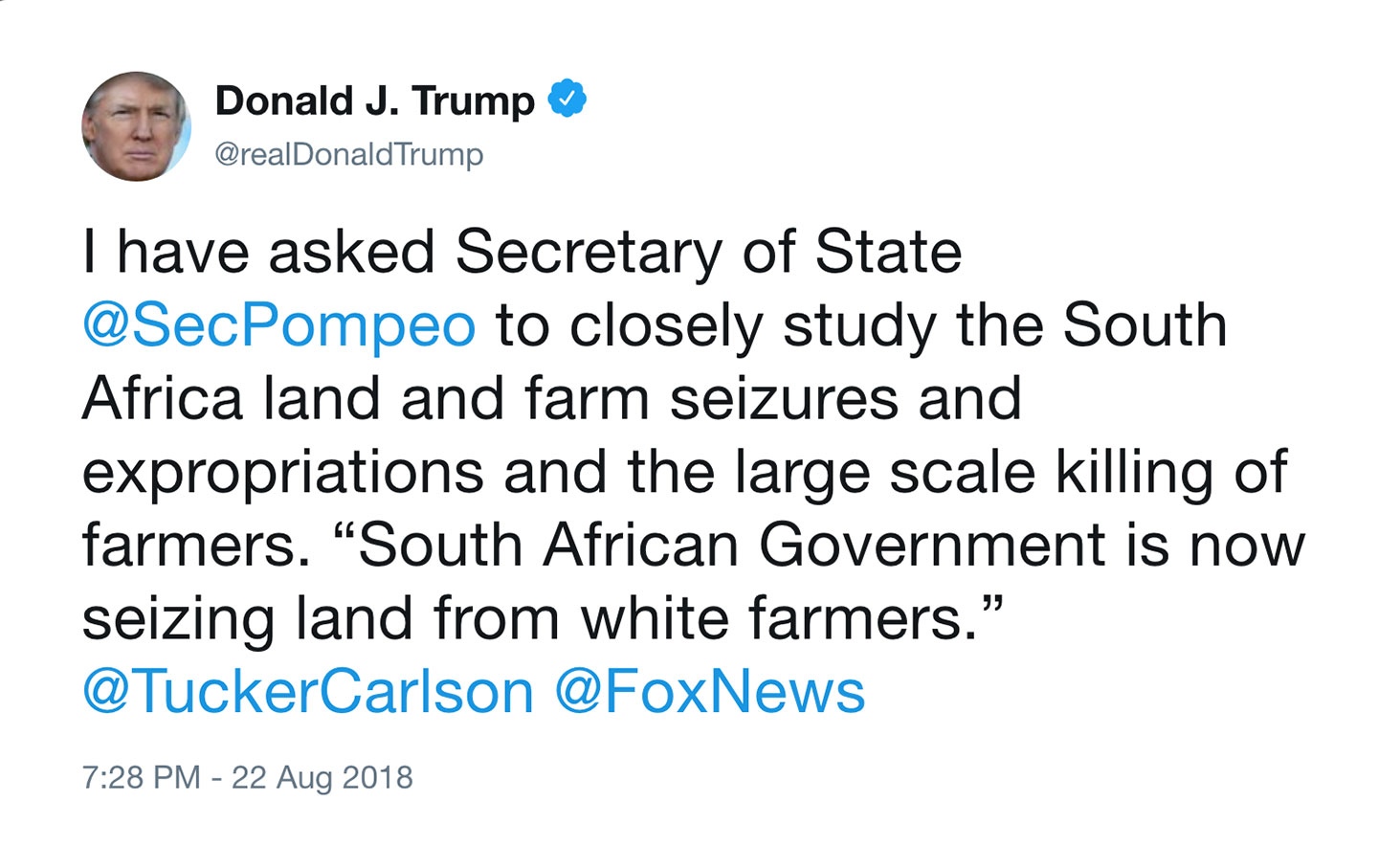 Taking his lead from Tucker Carlson, the president is spreading the myth of a global “white genocide.”

via With His South Africa Tweet, Trump Became a Megaphone for a White-Supremacist Talking Point | The Nation FactCheck: might there have been people in Australia prior to Aboriginal people?

Tony Abbott, Terrorism, And The Politics Of Paranoia | newmatilda.com.

In an effort to switch the nation’s focus from what Andrew Bolt called his “pathetically stupid” decision to knight Prince Philip, Prime Minister Tony Abbott yesterday delivered a press conference to announce his government’s policy on family violence. Family violence – violence committed against women and children and sometimes men by partners, ex-partners and parents – has at last become a political priority, following extended media coverage of horrific murders, including the filicide of 11-year-old Luke Batty by his father in February last year. Luke’s mother, Rosie, was instrumental in having the Victorian government set up a royal commission into family violence.

Unfortunately, Abbott’s press conference became yet another example of what is being increasingly seen as his political mismanagement and hypocrisy. As Dan Harrison observes, the initiatives Abbott announced – a national scheme for domestic violence orders, national standards for intervening against violent perpetrators and improving online safety – were initiatives he’d already announced last June. The conference was a re-announcement. And by emphasising family violence, Abbott gave critics an opportunity to highlight a number of cuts Abbott’s government has made to programs that help victims and prevent violence.

At Daily Life, Jenna Price lists some of the programs that have fallen foul of Abbott’s austerity cuts. A five-year research project in Britain recently found that most violent men who participate in reform programs completely stop physically harming their partners, but the Abbott government has defunded men’s behaviour change programs in Victoria entirely, and has cut $3.5 million from front-line domestic violence support services for Indigenous women on top of millions from community legal centres. As Abbott said during yesterday’s press conference, one woman every week is killed in Australia by her current or former partner. Why, then, has his government de-funded preventive programs?

Russell Marks
Politicoz Editor
Sign up to get Politicoz delivered
to your email address every weekday at lunch time.

As for Rupert Murdoch’s demand that Abbott sack Credlin, we have a strange diversion. (As an aside, I find it strange that Murdoch said “Leading involves cruel choices”. “Cruel” not strong or difficult. There’s a whole book there for some psychiatrist. As for “Tough to write”, I guess that’s why he become an owner rather than a journalist.)

The conspiracists among us will suggest that this is Murdoch’s way of saving Abbott. Abbott will surely refuse and by standing up to a dictator and supporting his woman (er, only in terms of being his Chief of Staff, we know that he has more than one woman in his marital home, which is what qualifies him as a feminist) Abbott is showing that Rupert isn’t pulling his strings and that he’s his own man, and that this a clever plan that they probably worked out while Abbott was on his way back from Iraq when he stopped off at a destination that none of us know about to meet Rupert, Peta, Wendy, Tony Blair and Elvis for lunch.

The other responses will be more confused. Some will argue that Credlin shouldn’t be sacked on Murdoch’s say-so and argue that Abbott should stand up to Murdoch. Others will argue that this is a distraction, it doesn’t matter what anyone does, we need to complain because Bill Shorten didn’t say anything about this, and Labor should change leaders. Others will say that there’s no basic difference between Liberal and Labor. A small number will say that Murdoch has it right for once. A couple will say that none of this matters and that the world is doomed and renewable energy won’t solve anything. One Abbott supporter will start talking about something even more irrelevant to any of this, like debt or climate change in the hope that he/she attracts all the comments like a chip to a bunch of sea-gulls.

But to me there’s only one clear, intelligent response to all this. That’s right – only one! Certain people (the names Tony, Peta and Rupert may spring to your mind, but if anyone adds Rossleigh, I’ll be very, very annoyed and you’ve blown your chances of a knighthood when I become supreme ruler) are starting to think that their opinion is the only one that counts. And that tends to piss people off, eventually. It’s fine when the opinion is that you deserve something far better than what you’ve got. However, once it morphs into I said you deserve better and you picked me, I’m it, so shut up, people tend to reassess a whole lot of things. I mean, whatever happens in the Queensland election this week, I’d feel pretty safe betting against an increased majority for Campbell Newman.

Whatever your views, I think you should petition Abbott and demand that I get the next knighthood. Tell him that this his best chance of survival. Yep, it’s not likely that he’d do it. It’s almost as unlikely as him surviving the year as PM. But it’d please my mum and she’s even older than Prince Philip. And if we’re talking about unlikely things, I think we could create a fairly long list if we started just three years ago, so anything’s possible.