Liberal politician Stuart Robert spent almost $17,000 of taxpayers’ money on “personalised letterhead stationery” during the final weeks of the financial year, more than five times the typical spend for an MP. 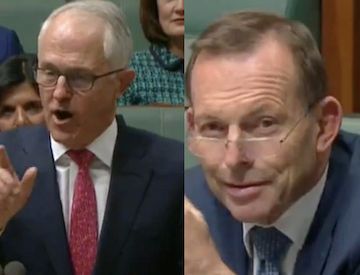 Yet we are now in a surreal world where consequences and causes are disconnected, where science is ignored in the face of existential threats and where building coal-fired power stations is viewed by some in Government – such as former PM Abbott, Member for Hughes Craig Kelly and Resource Minister Matt Canavan, among others – as some sort of an answer to Australia’s future.

It is now viewed in Government as heresy to mention the drought and climate change in the same sentence, just as it is when bushfire strikes. Those who do so risk being accused of politicising the issue, or worse, of pushing a “green-left” agenda. So toxic are the climate wars that it is now taboo to discuss the possibility that we may be entering a dangerous new time in our “sunburnt country”.

via The NEG and the ‘idiocy’ of COALition climate change wars

Despite the distraction and political chaos of Brexit negotiations, the United Kingdom has just published a far-reaching and thoroughly impressive plan to manage risks from climate change.

This follows on from their broader 25-year Environment Plan, released in January. It aims to “help the natural world regain and retain good health”, to enable it to better cope with climate change.

The recently released climate plan is a strategy to save lives from heat, flood and fire — yes, fire, even in the UK! Let’s stop and take a second to conceive how much $21 trillion is (which you can’t because our brains short-circuit, but we’ll try anyway).

1. The amount of money supposedly in the stock market is $30 trillion.

4. Imagine you make $40,000 a year. How long would it take you to make $1 trillion? Well, don’t sign up for this task, because it would take you 25 million years (which sounds like a long time, but I hear that the last 10 million really fly by because you already know your way around the office, where the coffee machine is, etc.).

The human brain is not meant to think about a trillion dollars.

What a joke the government is congratulating itself for having paid out $5.4 mill in 2 weeks. That’s like the banks saying “but it was only one mistake repeated 57,000 times and we have nipped it in the bud”. Simon Birmingham shouldn’t be sacked for not knowing but simply for congratulating his department and treating the Australian electorate like idiots. (ODT)

The group allegedly backdated the children’s care by four months to a single day in March, claimed they were cared for up to 14 hours a day, five days a week, and received $5.7 million in government rebates and benefits over two weeks.

“The message today is that greed on this scale will not be tolerated by authorities,” acting AFP commander Kate Ferry said after the arrests on Thursday.

On Friday, Education Minister Simon Birmingham congratulated officers in his department for their role in monitoring non-compliance.

“The Turnbull government continues to crack down on rorters, and actions like this should send a further message to people who try to rip off the child care system,” Mr Birmingham said.

By David Tyler Australia is way ahead of the game in terms of using government policies and processes to punish and isolate our most disadvantaged citizens so the Government can reduce its welfare spending a few million. We now allow our Government to implement the work of sociopaths and threaten poor citizens with imprisonment on…

Source: Turnbull Government ought to be shut down for fraud – » The Australian Independent Media Network

You cannot make this crazy up. And they keep re-electing him.

Source: Rep. Steve King Likens Immigration To Letting “A Billion Indians From India” Into US | Crooks and Liars

The prospect of a ‘golden age’ of cheap and green energy is being put at risk by constant Government tinkering that is driving away investors, the industry has warned. In an interview with The Independent, Lawrence Slade, the chief executive of Energy UK, highlighted 10 different changes over the past year or so that he said were undermining confidence in the sector. The government’s $70m budget for border protection propaganda is the latest in a long line of taxpayer-funded “messaging” exercises.

EXCLUSIVE: The money federal government departments are saving through job cuts is being cancelled out by a massive increase in expenditure on high-paid consultants and contractors.

A man in Texas has been arrested while trying to pay his tax in $1 bills for “disrupting the operation and efficiency” of the local tax office.

Timothy Norris, 27, was trying to pay his $600 property tax at a tax office in Wichita Falls, Texas, last Wednesday when he was told to leave the office by Tax Assessor Collector Tommy Smyth. Smyth accused Norris of creating a disturbance and disrupting the efficiency of the authority as the latter wanted to pay the whole sum with $1 bills.

READ MORE: ‘Being poor is not a crime’: Civil group files lawsuit to help man imprisoned for failing to pay fines

Unfolding the bills paralyzed work in the office, so Smyth asked Norris to leave. However, the latter refused. The Wichita County Sheriff’s Office deputy who was present as the situation unfolded tried to arrest Norris but he pulled away and the deputy had to use force to detain him.

Norris was charged with criminal trespass and additionally charged with resisting arrest. Norris’ bail was announced as standing at $500 for both charges.