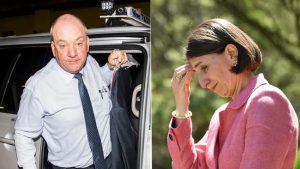 Above all, Morrison’s backing of Gladys helps normalise corruption as a way of government and the price of doing business. Whilst it’s a dog-whistle to the “freedoms” mob demonstrating against being vaccinated and imported lies and conspiracies about a deep state, it is also an act of desperation born out a Machiavellian realpolitik that tells him his government needs to win at least one other seat in NSW. “Politics is governed by the iron laws of arithmetic” his mentor Howard drily opined in an absurd reduction that helps our democracy drown in cynicism and distrust. In reality as Tony Fitzgerald argues, we need every politician to acknowledge that “membership of a political party doesn’t excuse them from their personal obligations to act honourably, and political parties to understand that voters will only vote for politicians who make and keep promises to act ethically.”