“Pillaging.” Sounds a lot like looting. But looting is bad, isn’t it? Conservatives say it is. Looting is a wicked thing—although I only hear conservatives denounce looting when Black people do it. Racism explains why the MAGA crowd loses their minds over scattered offenses against property and doesn’t bat an eye over cops shooting unarmed Black people. In any event, stealing all the oil in Syria is looting on such a heroic scale that it’s hard for some people not to admire it. One thing Trump has taught us is: if you’re going to loot, go large.

Looters and Losers and Trump, Oh My! – CounterPunch.org 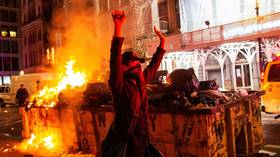 Transparency out the door (ODT)

“looting is a major problem in America”—just not in the way that the issue has been presented by President Donald Trump and the corporate media, who have spotlighted the property destruction and the stealing of goods that have occurred alongside the demonstrations against police brutality and systemic racism over past few weeks.

Reports this week that Mosul’s central library has been ransacked by Isis and 100,000 books and manuscripts burned has cast an international spotlight on a new wave of destruction that has been raging through the northern Iraqi city since last summer.

Earlier this month the head of the UN’s Educational, Scientific and Cultural Organization (Unesco) voiced alarm over “one of the most devastating acts of destruction of library collections in human history.” Director general Irina Bokova said the destruction involved museums, libraries and universities across Mosul.

She added: “This destruction marks a new phase in the cultural cleansing perpetrated in regions controlled by armed extremists in Iraq. It adds to the systematic destruction of heritage and the persecution of minorities that seeks to wipe out the cultural diversity that is the soul of the Iraqi people.”

On Monday, Ninwa Al Ghad, a satellite channel broadcasting out of Mosul, reported that the central library had been burned with the reported loss of Iraqi newspapers from the beginning of the 20th century, as well as maps, books and collections from the Ottoman period. But confusion remains about the extent of the damage, with two local Facebook groups insisting on Thursday that, though some books were burned, the library itself was still standing.

The escalating devastation culminated on Thursday with the release of a five-minute video purportedly showing militants using sledgehammers to smash ancient artifacts in the city. The video, posted on Twitter and bearing the logo of Isis’s media arm, shows a group of bearded men in a museum using hammers and drills to destroy several large statues, including one depicting a winged-bull Assyrian protective deity that dates back to the 9th century BC.

The news saddens but does not surprise Shahla Kamal, who until last summer was a lecturer at Mosul University’s College of Political Science. In June she was overseeing students sitting an end-of-year exam when the dean told everyone to go home because of an immediate curfew.

Overnight, the Islamic State had taken over the city and imposed sharia laws. Shahla lost her job when Isis deemed the college “un-Islamic” and closed it along with the colleges of law, fine arts, physical education, languages, social sciences and archaeology.
Advertisement

Isis looted and vandalised the new multimillion-dollar physics and chemistry laboratories. Each college had its own library and these were looted, too. Some, like the library of Islamic studies, housed priceless ancient manuscripts. Not any more. The classrooms of the closed colleges and departments are now the sleeping quarters for Isis fighters, and are used as storage for their weapons cache.

In addition to the college libraries, each of Mosul University’s two campuses has a central library. Teba used to work in one of them, and visits whenever she can. The library is still intact, but Teba makes sure that squatters – who have now moved on to the campus with their farm animals – don’t use the books and furniture for firewood. She says she’s heartbroken and enraged at the fate of Mosul’s central library, and fears a similar fate for the remaining university libraries.

Mustafa was unable to salvage anything from the College of Physical Education, where he worked. The last time he went there to check on the college he was stunned to find the college’s Olympic-sized pool looking like a green swamp, and Isis fighters lounging on the furniture, their sleeping mattresses stacked up outside the dean’s office. “The Amir [Al Baghdadi] takes what the Amir wants,” the fighters said, and demanded that he hand over his keys to the department.

The college of economics and business where Soraya studied was not closed. Isis did make a number of changes, such as segregating students by gender and driving away almost all the female staff. In November 2014, Soraya quit her studies after a female Isis police officer threatened to bite her hand for taking off her regulation gloves during an exam – with the gloves on, Soraya’s pen kept slipping while she tried to write. Biting is common – one of Soraya’s friends needed three stitches on her right hand when she was bitten – and students say Isis’s female police wear a steel fitting in their mouths with jagged fangs to make their bite particularly sharp. Soraya decided at that moment to leave college and stay inside her house where she can wear anything she wants.

My family swap these stories of relatives and friends and shake our heads in disbelief. This is not the Mosul University they helped create half a century ago. In 1964, my great grandfather Abdul Fattah Al Malah, a graduate of the American University in Beirut and Oxford University, established the College of Pharmacy at Mosul University. He, and the other founders of Mosul University, all western-educated, brought a cadre of academics from Europe, the United States, India, Pakistan and several Arab countries to teach alongside Iraqi academics. That same multinational cadre went on to teach my parents who both went to study there in the 1970s.

As a child, my favourite pastime was to listen to my great grandfather reading stories to me and my cousins. Each was about the life of a groundbreaking scholar or scientist. “Education, education, education,” he would say to me, shaking his index finger like he was delivering a threat. He passed away in 1996. As much as I miss him, I am glad he is not alive to see Mosul today.