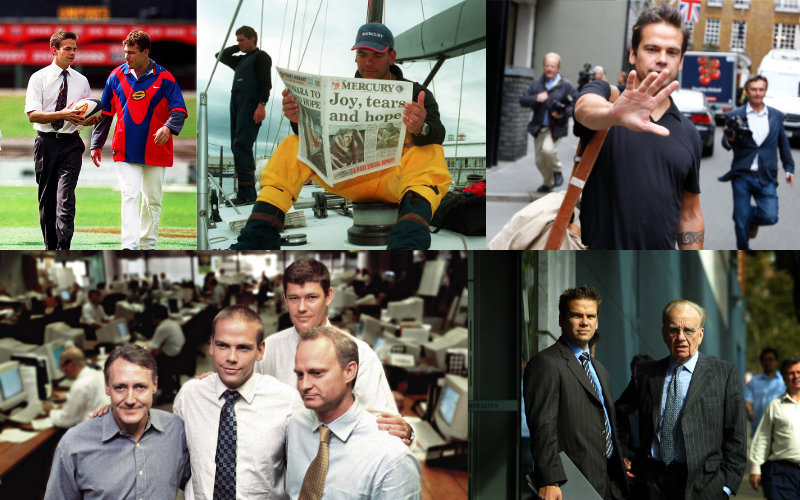 Australia’s own  MERITOCRACY is a fable. “If they can do it you can too in the land down under” is the myth preached just as you to can win the lottery and some do while the system guarantees you won’t because it’s designed that way. Inheritance ensures an increase in generational poverty and a flow up and an imaginary promise of a better trickle-down in the next decade. Remember Hawke’s promise that no child will be born in poverty well it worked for James and Lachlan

Billionaire media scions Lachlan Murdoch and James Packer have a close friendship which has endured the ups and downs of mega-deals including Australia’s ‘Super League’ war, the collapse of One.Tel, the rise of Realestate.com.au and failure of Channel Ten – some of the best and worst moments of Lachlan’s career. This edited extract from Paddy Manning’s new biography of Lachlan Murdoch sheds new light on their tumultuous business history.

The answer to the question “Who’s your daddy?” has never been more important.

Source: How your father is controlling your salary

Oxfam reports that just 80 people possess the same quantity of wealth as 3.5 billion others. On RT’s Crosstalk, economist Michael Hudson discusses how this happened with Oxfam official Max Lawson and Richard Wellings at London’s Institute for Economic Affairs.

Hudson begins, “According to every economics textbook and all the Nobel prizes for the last 40 years, this can’t be happening. According to the economics textbooks, the wealthy get rich by adding to production. You earn what you make and they’re wealth creators. But in fact what they’re producing isn’t wealth, it’s poverty. And they do this largely because—I think you can think of them as being creditors. They’re creditors to the bottom 99 percent that are debtors and renters. If you look at these wealthiest families, there are a number of common denominators: They didn’t earn their income, and yet economists only look at how people earn their income. President Obama last week said, “Well, if you have the desire to get rich and you work hard, you can do it.” But that’s not how these families got their wealth.”

Lawson adds, “Our figures show that the top group of people—the 80 people now—and of the billionaires… about a third now inherited their wealth. And that figure’s increasing all the time. And this is the point the French economist Piketty made in his famous book last year, that we’re rapidly returning to an era that we thought had been consigned to the history books, an era that we associate with The Great Gatsby or maybe Victorian times in Britain where wealth is inherited and all of the things that come with that. So it’s not just the capture of political power in this generation, it’s about using your money to shore up the future of your children and your children’s prospects. So it really is a kind of ossification of society, if you like, a stratification, which we think is deeply, deeply harmful, because it’s ultimately bad for the economy, it’s bad for meritocracy. And I agree that it’s a problem in the west, it’s a problem in rich countries, but I lived for many years in the developing world and it’s certainly a problem, for example, in South Africa where I lived, a deep, deep problem of inequality there. It’s such an issue that it’s now attacking the success that we’ve seen in the war on poverty in many of these developing countries, is being threatened by inequality there too. So it’s a problem all over the world. It’s not just in the U.K. and the U.S., it’s a problem as much in South Africa an India as it is here in London.”