Mr Incredibility, Clive, did promise, last year, he’d pay 800 former workers at Queensland Nickel’s Townsville Refinery. Three years late. Yet it was the Commonwealth which had to stump up $66m in unpaid entitlements.

“It is the core that is lunatic, not the fringe.” – » The Australian Independent Media Network

Gordon Gekko jumped out of a Hollywood movie onto a TV Reality Show in need of someone someone to play the role Trump was born to play. The Snake Oil salesman no longer needed a covered wagon to come to town. America was ripe and ready. Will he steal the Peace Prize too? (ODT)

Why should I go to that cemetery? It’s filled with losers.” The embodiment of the false creed of neoliberalism, Trump cannot fathom any human action that cannot be reduced to a transaction. He cannot comprehend volunteers because that involves altruism and empathy. The narcissistic materialist is equally confounded; discomfited to discover that over 1,800 US Marines lost their lives at Belleau Wood. He sees them as “suckers” for getting killed. In brief, as Goldberg sees, Donald Trump suffers the delusion that “nothing is worth doing without the promise of monetary payback, and that talented people who don’t pursue riches are “losers.” It’s not hard to hear the same delusion at work in the News Corp journalists who endlessly, every day twit Dan Andrews with the same questions. Why should the state pursue public health and safety instead of profits for business at any costs? Similarly, in his tedious repetition of his vacuous slogan “open the nation for business”, Trumpista Scott Morrison exhibits the same pathological indifference to others; the same failure to imagine another’s pain, along with an alarming poverty of mind and spirit which simply make him unfit to lead. He should resign over the sports rorts alone. In their own ways, the rise of Trumpism and the coronavirus pandemic have helped create an environment where Morrison and Murdoch’s minions’ claims that we must endlessly pursue selfish competition – that greed is good and might is right – are so vividly exposed as toxic aberrations and hopelessly, grotesquely inadequate to the times’ need for compassion, co-operation, community and humanity. We must expose their lies; continue to hold them to account.

Just who are the losers and suckers, Mr Trump? – » The Australian Independent Media Network 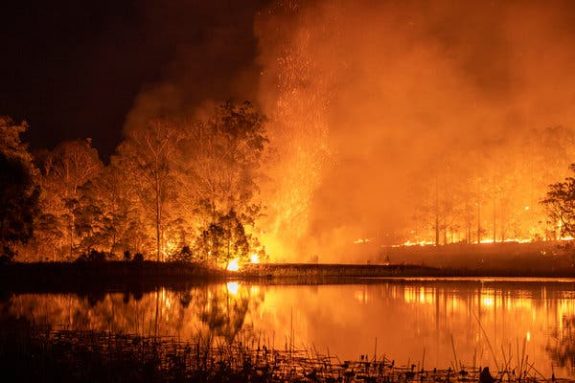 There is no link between droughts and climate change is the argument posited by News Corp pundits like Andrew Bolt and the LNP government’s right wing who Morrison says has “no influence”. It’s the same argument put by Big Tobacco smoking and cancer that there is no direct link. But Kelly Morrison and News Corp pundits keep silent on that score and I’m sure don’t encourage their kids to smoke.

After 40+ years of scientific research the evidence is clear that there is a correlation between the rate rise of CO2 and global warming records. That warming has intensified lengthened and changed the nature of droughts and lengthened the fire danger periods changing the nature of the fuels readily burnt. Climate change has in fact significantly impacted the consequences experienced of the bushfires we see today. Predictions to this effect were made by climatologists more than 10 years ago ignored and scoffed at.

The biggest response in 2013 was heard by ex LNP PM Tony Abbott who said science of global warming was crap. Today we hear Scott Morrison declaring it’s no time for politics. We need to deal with the new reality and we are doing that but forget the cause. (ODT)

“There is no link, the facts that cause the fires are the drought and the drying of the environment,”

via As straw men in a firestorm. – » The Australian Independent Media Network