Pro-gun media outlets and figures have been silent after the recent release of old footage from National Rifle Association Executive Vice President Wayne LaPierre’s botched elephant hunt, during which he shot an animal four times before managing to kill it.

Nine supporters of former President Donald Trump, all arrested on weapons charges in connection with the storming of the U.S. Capitol, had “enough ammunition to shoot every member of the House and Senate five times,” according to a startling new report on the role of firearms in the Jan. 6 insurrection. 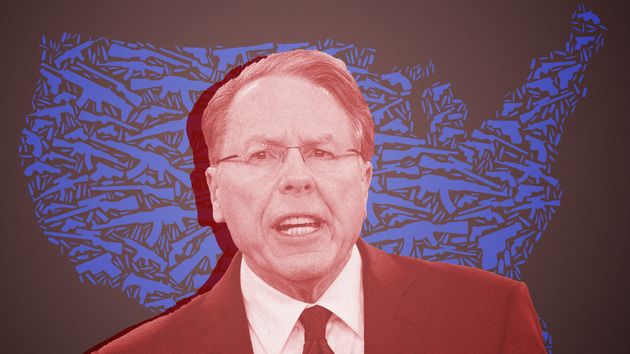 In the aftermath of Saturday’s mass shooting in El Paso, Texas, President Donald Trump has been widely criticized for spreading hateful anti-immigrant hysteria. The blame is well earned, but Trump is not alone. For years, the National Rifle Association has pushed the false narrative that law-abiding Americans are in danger from an invasion of violent foreigners crossing into the country from Mexico. The only way to protect yourself and your family, the gun lobby warns, is to stock up on weapons and take responsibility for your own safety.

via Guns, politics and policy: what can we learn from Al Jazeera’s undercover NRA sting?

The National Rifle Association on Monday named as its next president retired US Marine Colonel Oliver North, a conservative commentator best known for his central role in the 1980s Iran-Contra affair.

The head of the National Rifle Association (NRA) has lashed out at gun control advocates, saying Democratic elites are politicising the latest mass school shooting in the United States to try to erode constitutionally guaranteed gun rights.

“Their goal is to eliminate the Second Amendment [of the constitution] and our firearms freedoms so they can eradicate all individual freedoms.” 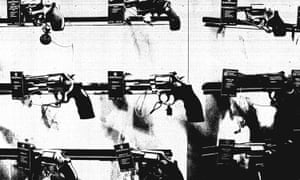 Source: Delay, delay, delay: how the NRA handles a crisis | US news | The Guardian

United States President Donald Trump has called the gunman who killed 59 people and wounded more than 500 others at a music festival in Las Vegas a “very, very sick individual” and said gun laws would be discussed “as time goes by”.

Source: These Are the People Who Really Run the NRA | Mother Jones

Yesterday, the New York Daily News put up a controversial cover that I thought was pretty good. Today, they are out with another cover that, I’ve got to say, is a bit much for me. It calls the alleged perpetrator of Wednesday’s massacre, Syed Farook, a terrorist (accurate!) and Robert Dear, Dylan Roof, Adam Lanza, and James Holmes terrorists (also accurate depending on your specific definition!), but then in the right hand corner it labels Wayne LaPierre, the head of the National Rifle Association, a terrorist.

But, on the other hand, just today Senate Republicans at the NRA’s behest voted to kill a law that would make it harder for terrorists, felons, and mentally ill people to buy guns. It’s also worth noting that most gun owners don’t even support the NRA’s radical agenda. So it’s not like I’m saying the NRA is a bunch of peachy keen cats deserving of sainthood or anything.

Relatedly, my colleague Julia Laurie spoke to a number of national news organizations about how and when they decide to call a “killer” a “terrorist.” Give it a read. Fascinating stuff.

The NRA has the noose pulled tight.

Source: Discredited Gun Researcher John Lott Calls It “Inflammatory” To Point Out San Bernardino Was The 355th Mass Shooting This Year In The US | Blog | Media Matters for America

Details are still scare, but conservatives are flooding Twitter with racism, NRA talking points and even jokes VIDEO

Source: “I guess you got what you say you wanted”: Right-wingers blame gun control, lash out at Obama over San Bernardino shootings – Salon.com

US President Barack Obama on Thursday angrily called for stricter gun laws after the latest mass murder in Oregon and took aim at the powerful National Rifle Association gun lobby for blocking reform.

In the United States, most people diagnosed with mental illness are allowed to buy guns. While state laws vary, federal law prohibits only those who have been committed to a psychiatric hospital or adjudicated as “mental defectives” from owning firearms.

In most states, even people who have committed violent misdemeanors or have had restraining orders issued against them for domestic violence are allowed to own guns.

But researchers at Duke University suspect that the law is ignoring a group of Americans who could make for potentially dangerous gun owners: people with a history of angry, impulsive outbursts. In a study published this month in the peer-reviewed journal Behavioral Sciences and the Law, the Duke team looked at more than 5,500 interviews conducted in a landmark survey of mental illness by Harvard researchers. From the interviews, they extrapolated that 1 in 10 adults in the United States has an anger management problem—and access to firearms.

One caveat: While it makes intuitive sense that angry people and guns would be a volatile combination, it’s important to note that there is no data yet on whether people with anger problems are more likely to commit violent crimes. Still, lead author Jeffrey Swanson believes that the finding is worrisome. “Probably the strongest predictor of violence is previous violent behavior,” says Swanson, a professor in psychiatry and behavioral sciences at Duke Medicine.

Swanson points to the recent shootings of three students near the University of North Carolina-Chapel Hill. The alleged shooter, Craig Stephen Hicks, had a history of threatening behavior. “People who knew him said that he was very angry; they were scared of him,” says Swanson.

And yet, in most states, even people who have committed violent misdemeanors or have had restraining orders issued against them for domestic violence are allowed to own guns.

Meanwhile, people with the types of severe psychiatric problems that lead to involuntary commitment, like schizophrenia and bipolar disorder, commit just 4 percent of violent crimes in the United States. Most people with those acute conditions are not prone to violence.

However, Swanson doesn’t believe that isolated incidents of anger should prevent people from buying guns—everyone gets angry once in a while. But “the group that we focus on goes far beyond regular anger,” he says. “These individuals are off on the extreme.” They often get into physical fights and break or smash things when they become upset.

Some states have tried to address the problem with laws that allow police to temporarily seize weapons from people whom a court deems immediately dangerous based on testimony from those who know the individual and his or her behavior. Currently, just three states—California, Connecticut, and Indiana—have versions of these laws.

In most places, a history of violence isn’t enough to make authorities think twice about whether an individual should be allowed to own a gun. “The way the law is set up now, it’s missing a lot,” says Swanson. “The most volatile people are slipping through the cracks.”