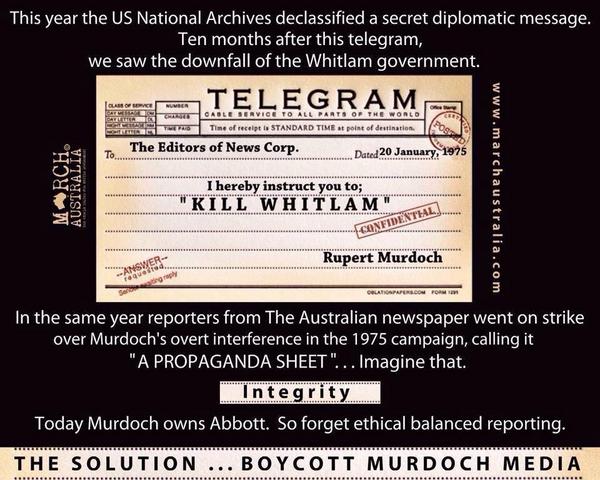 With Gough Whitlam’s legacy now being reconsidered and debated, one thing the Australian media are not prepared to discuss is the role of Rupert Murdoch in his dismissal, writes Rodney E. Lever.

WITH THE SAD PASSING of former Prime Minister Gough Whitlam this week, it is interesting to recall how his illustrious record has been besmirched and distorted over the years – even in recent years – and how certain elements involved in his dismissal have been removed from view — and placed down the memory hole.

Last year, for instance, I saw the two episodes of the ABC’s documentary about the Whitlam era, called Whitlam: the Power and the Passion.

Having been closely involved at that time, I was amazed at Australia’s national broadcaster’s either incompetence or deliberate burying of the truth.

The ABC reeled out all the false allegations thrown at the Whitlam Government by Rupert Murdoch’s newspapers at the time, with no evidence whatsoever to back them up. It simply repeated ugly and untrue stories from The Australian — stories that have been since been shown to be contrived, exaggerated and false.

Did they mention that John Howard was one of the busy bee Liberals who secretly brought Khemlani to Australia and took him to a Canberra hotel with his two suitcases of records of supposed dealings with the Whitlam Government. After long days and nights sifting through the papers, Howard and his colleagues found nothing – absolutely nothing – which could be held detrimentally against Whitlam and his government?

No. There was no mention of that. Nor have I seen any mention of this in the welter of articles about Whitlam and his dismissal this week.

This is just one part of the concerted misinformation campaign carried out by the Murdoch press at the behest of a furious, jilted, Rupert Murdoch in 1975.

In 1975, Rupert Murdoch came back from England, where he had just purchased The News of the World. He came expressly to destroy a government which, three years earlier, he had helped to elect.

Murdoch had hated Menzies. He also hated McMahon, who was in the pocket of the Packers.

He campaigned for Whitlam in 1972, with all the emerging power of his newspapers and expected rewards in return.

From Whitlam, he got nothing back, not even condescension, for Whitlam certainly had at least the same level of personal ego as Rupert Murdoch — perhaps even more.

Miffed by Whitlam’s failure to reward him for his support in the election and Whitlam’s failure to accept the Murdoch view on how to run the country, Rupert began his ugly, ruthless campaign to bring Whitlam down. It was the most savage attack on an elected government in the history of this country — with the possible exception of the attacks on Julia Gillard and Labor’s reforms in the last term of Parliament.

In the early stages of the campaign, there had been criticisms from highly regarded journalists about their copy being so altered that their stories bore no resemblance to articles that had been filed. Placement was pushed back, headlines were deemed by them as scurrilous and not reflective of the content, and so the outraged allegations of not just media bias, but direct editorial interference, precipitated a strike of journalists.

…the deliberate and careless slanting of headlines, seemingly blatant imbalance in news presentation, political censorship and, more occasionally, distortion of copy from senior specialist journalists, the political management of news and features, the stifling of dissident and even palatably impartial opinion in the papers’ columns…

In the Murdoch Papers, Dr Martin Hirst detailed some firsthand accounts of the overt anti-Whitlam pro-Liberal bias of the Murdoch press, including by former Murdoch employee Alan Yates:

Alan Yates was a third-year cadet on the Daily Mirror and recalls the dismissal ‘shocked the entire newsroom’. Yates was on the AJA House Committee and says that while Murdoch was not necessarily in the newsroom, ‘his editors and his chiefs of staff were certainly involved in day-to-day selection of editorial content’. Alan Yates has said that he felt powerless as a ‘junior reporter’, but remembered his copy being altered to favour the Liberal Party’s viewpoint:

‘When questioning the chiefs of staff and chief sub-editor about this I was clearly told that that was the editorial line, the editorial people had thought that it was a stronger angle. Therefore I was left not too many options to go.’

Alas, I was not among them. I was the senior executive of News Corp in Queensland and the lone breadwinner for my family and the father of six children, all at a critical stage of their education. I felt unable to walk away from my job so easily as some of the other journalists. But the events of those days brought me to consider resignation at a more appropriate time.

The mainstream media, by ignoring this sad episode, are touching up historical events to make them more palatable to certain current actors — specifically Rupert Murdoch. By doing so, they tarnish the Whitlam legacy and mislead the Australian people.

In effect, the mainstream media are sending Rupert Murdoch’s – and its own – role in the premature downfall of Gough Whitlam down Australia’s growing memory hole, thereby doing the Australian people a manifest disservice.