Following the final hearing of the congressional investigation into the Jan. 6, 2021, attack on the U.S. Capitol, the evidence is overwhelming: The Department of Justice must bring criminal charges against Donald Trump and many others for their culpability for the attack.

Source: Donald Trump must be indicted — and this time, I believe Merrick Garland will act | Salon.com

Now, many people have taken a step back even from these groups altogether. But the folks that have stuck around continue to be quite radical, and probably even more radical than they were before. Especially thinking about what is going to happen with the midterm elections, we are going to see a lot of invigoration.The Conversation

In Wake of Jan. 6 Hearings: What was Trump’s Relationship to the Militias who invaded the Capitol?

We Still Have to Take Donald Trump Seriously 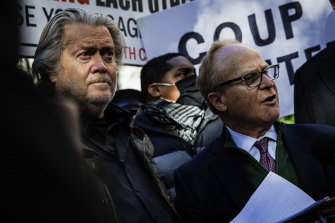 The former president had previously instructed Bannon and other associates not to cooperate with the panel, claiming that executive privilege – a president’s power to withhold certain internal executive branch information –compelled them to stay silent. But in recent days, as several witnesses have come forward to offer the House panel damning testimony about his conduct, Trump has grown frustrated that one of his fiercest defenders has not yet appeared before the committee, people close to him said.

Bannon to speak for Trump. The decision was made because Trump was being revealed for who he is and by so many who were once close allies. Bannon’s the counterweight surely that has to be an unbelievable scenario? A truely Dr Strangelove moment.

The ex-White House strategist had refused to appear for a deposition and was charged with criminal contempt. Trump has reportedly now given him a green light.

“And you would think a reasonable response from a president would be, oh my goodness, let’s make sure the metal detectors are operating properly,” he explained. “He said just the opposite, take them down, let the armed members of the group in, and they can march to the Capitol from there. To do what? To stop the certification of his political opponent’s election win. So in a very real sense, that smoking gun evidence that Donald Trump wanted to lead what we now know is an armed attack on the Capitol. The loaded gun evidence is, the witness tampering information, and you know, witness tampering just strikes at the very heart of the integrity of investigations, whether congressional or criminal.” 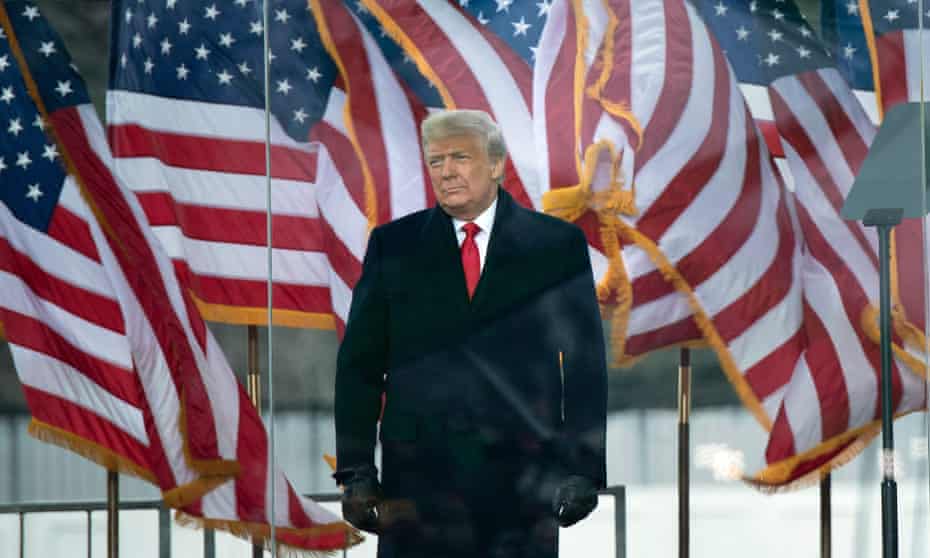 “Anyone downplaying Cassidy Hutchinson’s role or her access in the West Wing either doesn’t understand how the Trump WH worked or is attempting to discredit her because they’re scared of how damning this testimony is,” tweeted former White House deputy press secretary Sarah Matthews, who resigned after Jan. 6. “For those complaining of ‘hearsay,’ I imagine the Jan. 6 committee would welcome any of those involved to deny these allegations under oath.” ( Mick Mulvaney )

As Hutchinson laid out, Trump was not only aware that many in the rally crowd were heavily armed, he seemed to be counting on it. He got angry with the Secret Service for not letting people with AR-15s and body armor clamor to his side during the rally, saying, according to Hutchinson, “I don’t fucking care that they have weapons. They’re not here to hurt me.” He demanded that the armed thugs that support him “march to the Capitol from here.”

Trump knew they were armed. Yet he directed his supporters to the Capitol on Jan. 6. He then repeatedly insisted on being the head of the mob. When Secret Service wouldn’t let him, he yelled, “I’m the f-ing president! Take me up to the Capitol now!” and physically attacked the agent driving th

State election officials have recounted how Donald Trump supporters threatened them and their families after they refused to help the former president overturn his 2020 election defeat.

It is pretty clear that Eastman knew there was a good chance for serious bloodshed if Pence overturned the election.

after the insurrection on Jan. 6th he came back to one of the White House lawyers who said what is no doubt going to be one of the most famous quotes of this scandal: “I’m going to give you the best free legal advice you’re ever getting in your life. Get a great f-ing criminal defense lawyer. You’re going to need it.” A few days later Eastman emailed Trump’s other attorney Rudy Giuliani asking to be on the “pardon list.” 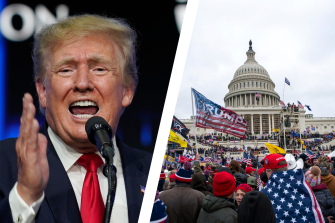 Washington: Donald Trump put his own vice president’s life at risk by embracing an elaborate plot to overturn the 2020 election, despite knowing the plan was unlawful, a Congressional hearing on the US Capitol attack has been told.

Trump produced an unprecedented flood of lies and false statements during his presidency—over 30,000, according to the Washington Post. Is it possible he cannot tell fact from fiction? As a narcissistic egomaniac, does he believe he can manufacture reality? His psychological relationship with the truth has always been difficult to fathom. Trump cannot cite any confirmed evidence of fraud, yet he has unwaveringly insisted dark sinister forces stole a grand electoral landslide from him. Again and again, reality was presented to him, but he acted as if it did not exist. Is this because he cannot recognize reality or because he doesn’t want to recognize reality for assorted transactional purposes? So far, the committee has not provided an authoritative answer. But that may be above its pay grade. In any event, there is a fundamental truth that transcends resolution of this issue: Whether or not Trump believes in his Big Lie, he has successfully encouraged millions of Americans to do so, and that includes the thousands who assaulted the Capitol on January 6. In either case, Trump is a threat to the republic.

Trump is satisfied he has enough wriggle room

Members of the House committee investigating the Capitol riot say they have uncovered enough evidence for the Justice Department to consider an unprecedented criminal indictment against former President Donald Trump for seeking to overturn the results of the 2020 election.

Thursday night’s public hearing by the House Jan. 6 committee made one thing very clear: Donald Trump is personally in the crosshairs. They are coming for him with receipts, in the form of testimony from some of his closest aides and allies. The committee seems prepared to destroy any pretense that Trump was a casual bystander to the insurrection. In fact, its members are building a case that he actively encouraged it, and that by refusing to take action for many hours that day, he was an actual accomplice.

Source: Liz Cheney to GOP and America: Trump did it, and we’re coming for him | Salon.com

Fox News continues to deny Jan 6th ever happened. It’s a lie, so they won’t broadcast ignorance to America. But, they continue to call themselves the leading corporate agents of news and information in the nation. Just as 88% of America wants gun control  Fox News continues to tell America that’s also a lie.

For a country where few people remember what happened before last week’s verdict in the Johnny Depp-Amber Heard case, Thursday night’s hearing provided a gut-punch reminder of the violence of the insurrection.

When the committee, and the Department of Justice for that matter, get to the point that they’re issuing subpoenas to people who were regularly in the room with the president during the days and weeks leading up to the assault on the Capitol, I would be very, very worried if I were the ultimate target of both investigations. The lid may be getting ready to come off the House of Representatives, but down at Mar-a-Lago, the roof is falling in on Trump’s House of Lies.

A reality Trump didn’t want revealed. But lost his court action to stop it now it no doubt be sbsorbed into his world of false facts.

While it remains unclear who actually wrote the draft, it does appear to align with the ideology of former President Donald Trump’s allies and many right-wing figures who circulated his claims of widespread voter fraud. The Jan. 6 investigative committee was able to obtain the draft earlier this week after the U.S. Supreme Court denied Trump’s request to block the panel from obtaining a substantial amount of executive-branch documents.

Source: Jan. 6 Committee Obtains Executive Order Draft That Called for Voting Machines to Be Seized after the 2020 Election | The Smirking Chimp

Twitter Reddit Email save A member of the Oath Keepers returned to the Capitol a day after the deadly Jan. 6 riot for “recon” as the group, which had stocked up a cache of weapons and ammunition, plotted to battle authorities for weeks, prosecutors said in a court filing. Ed Vallejo, a 63-year-old Arizona man who was one of 11 Oath Keepers charged last week with seditious conspiracy and other crimes for their alleged efforts to use a campaign of violence to prevent President Biden from taking office, messaged his alleged co-conspirators after the Jan. 6 riot was dispersed to declare “we’ll be back at 6 am to do it again,” according to prosecutors. He returned to the Capitol on Jan. 7 and told others he was “waiting for orders from [Oath Keeper founder] Stewart Rhodes,” who was also indicted last week. “We are going to probe their defense line right now 6 am they should let us in. We’ll see,” Vallejo said in a Signal message to other members, according to the court filing.

As our recent investigation detailed, law enforcement officers who defended the Capitol testified to Congress that they believed the mob of Trump extremists was far more heavily armed with guns than is definitively known. Internal communications from January 6 among US Park Police and other agencies that have since been made public support that view. The lack of certainty, the officers told lawmakers, was a result of their limited capacity to make arrests that day amid the sheer number of people, compounded by fears that taking more aggressive action could set off perilous violence. A document obtained recently by a government transparency watchdog, Property of the People, contains indications that the FBI had specific intelligence, prior to January 6, about armed people headed for the nation’s capital. According to emails circulated among FBI agents in the bureau’s Seattle field office on January 5, intelligence analysts with the Washington State Fusion Center had specifically noted social media comments suggesting that some residents of the state were “planning to travel armed to Washington D.C. for tomorrow’s protests there.”

Asked what questions he felt the January 6 committee should investigate, Officer Fanone urged the committee to investigate whether there was any coordination between members of the Congress, their staff and the insurgents. Officer Dunn used a powerful analogy to describe what he wants—that of a hitman. If a hitman kills someone, he goes to prison, Dunn said. So too must the person who hired the hitman. “It was an attack carried out on January 6, and a hitman sent them,” Dunn said. “I want you to get to the bottom of that.” You couldn’t ask for a clearer mandate.

Source: The First Hearing of the Jan. 6 Committee Completely Demolished Key Myths about the Capitol Attack | The Smirking Chimp