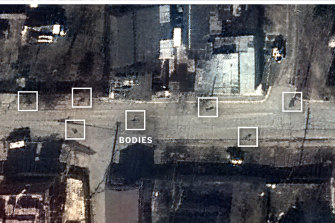 Russians prove to be absolute liars and are losing absolutely. Not just the war but their global propaganda efforts to discount what it is they have really done. They will go down in history for being duped by a steroid-riddled madman Vladamir Putin.

In a Telegram post on Sunday, the ministry suggested that the bodies had been recently placed on the streets after “all Russian units withdrew completely from Bucha” around Wednesday.

But a review of videos and satellite imagery by The New York Times shows that many of the civilians were killed more than three weeks ago, when Russia’s military was in control of the town.