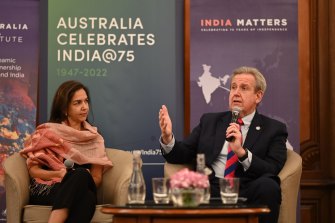 When Diplomacy and Hypocrisy stand shoulder to shoulder it’s generally over more than one issue. Australia India and Russia aren’t signatories to the Glasgow Emissions Target agreement on Climate either. We and they are all pro-coal, fossil fuels and stand alone against the rest of the world including the Australian electorate. How is it this Australian Government can declare that the friend of my enemy is our friend and still pretend to support Ukraine? They just do it without qualification expecting we will vote for them? The Morrison Government’s legacy is tarnishing us in the eyes of the world. It’s no wonder why Biden couldn’t remember ScaMo’s name but Trump could.

Source: India’s refusal to condemn Russia not an issue for Australia: Barry O’Farrell