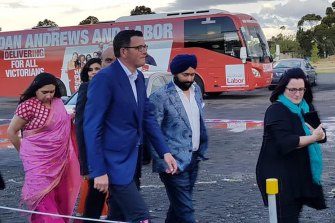 Amazing how a ” positive, progressive action” conducted in 2018 can

2) How a Good progressive action can be twisted and  turned on its head as if it were the equivalent of a LNP regressive vote-buying rort. Remind ourselves what the Sikh community has done for Victoria during Covid, the bush fires, and other emergencies and they have done it for nothing

3) The Age CH9 however is giving wind to a disgruntled female politician who happens to be Indian and is now claiming “bullying” by her party for having been dropped by the ALP. In a case of push back she has teamed with Adam Somyarek a proved to be corrupt politician also sanctioned by the ALP and facing legal action.

4) The Age is acting as a PR agency maintaing an equivalence exists with LNP rorts and that the ALP are acting as thugs in a State regarded as the most progressive in the country. Their bias is obvious.

Meanwhile, there’s a War going on in Europe, Covid is out of control yet Peter Costello’s Ch9 is running a point guard defensive distraction against Daniel Andrews why? Because Matthew Guy’s Liberals are falling apart at the seams in front of us. This is a flagrant example of a pathetic attempt at damage control. It’s not news but Mainstream private media acting as agents for the LNP in view of an advertising return come November and it’s another example of why we need to SAVE THE ABC.