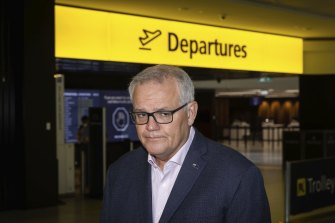 Morrison and Dutton had no issue when we sent our air force to the Middle East to bomb and then call civilian death simply “collateral damage”. We killed, and are currently witnessing a court case on Australia’s criminal killings in Afghanistan. We support the Israeli IDF’s criminality in Gaza and the West Bank. But now the scream of “foul” is being trumpeted across our media! Foul for a simple laser warning on a RAAF plane by a Chinese cruiser. Morrison and Dutton really are a pair of theatrical clowns crying crocodile tears, and acting like Chicken Littles in order to impress us with their political prowess.

How quick was Morrison to brush the laser incident aside to reveal it’s real purpose an attack on the ALP and not on China? The man’s intentions are not misunderstood. It’s to say and do anything to “service” or mount Australia for another 3 years. He hasn’t managed anything but spin, his foot in his mouth, and playing the daggy dad for a full term.

Well Mr Morrison, great organizer, planner, and action man. Where are the agricultural workers you promised in June 2021 to pick and save the fruit Industry by 2021’s end. It’s approaching March Morrison and you haven’t provided any. Just as with the promised Covid Vaccines, the RATs ICAC, ADF deployment in aged-care and so many other things. Great management!!

“I can see it no other way than an act of intimidation, one that is unprovoked, unwarranted. And Australia will never accept such acts of intimidation,” Mr Morrison said, suggesting that China would react much more aggressively if Australia ever did that to a Chinese aircraft.