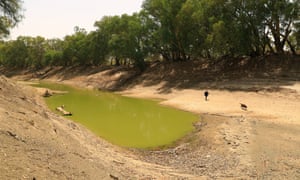 Guardian Australia reported this week on the mystery surrounding the reason Joyce chose the companies he did for the buybacks. On Friday, Labor raised specific questions about one of the purchases, worth $80m.

On Saturday, Hanson-Young said she would write to the auditor general requesting an urgent audit.

“The auditor has a responsibility to investigate how $80m of taxpayers money was paid for water that doesn’t exist,” she said in a tweet.