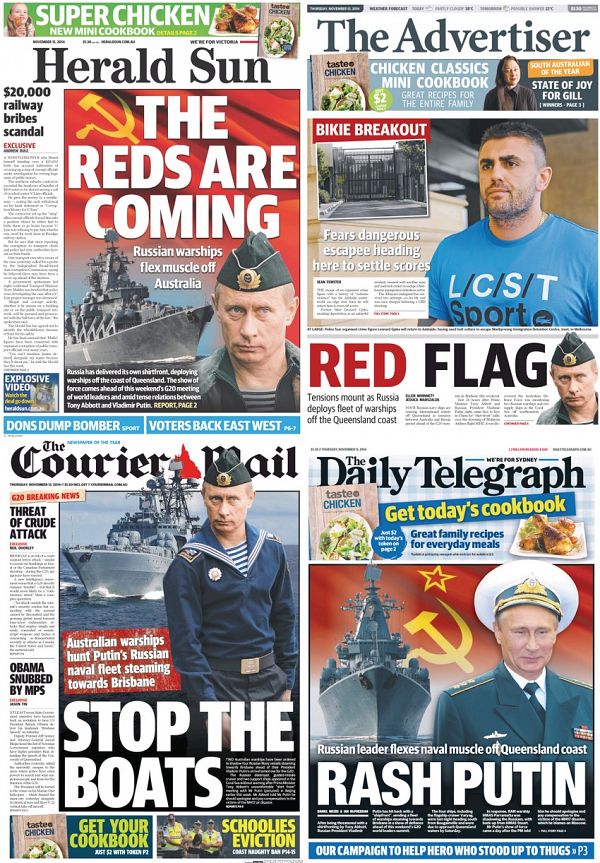 WHAT A STRANGE BUNCH OF HEADLINES today in Rupert Murdoch’s Australian tabloid newspapers.

It’s almost as if the last 25 years never happened. In the week that the world is celebrating the fall of the Berlin Wall ‒ the most potent symbol of the end of the Cold War ‒ Murdoch’s crazy liquid modern tabloid editors have raised spectre of

THE REDS ARE COMING

You couldn’t make this stuff up, but Murdoch’s minions apparently can and will.

The Russian boats are not even close to Australia’s territorial waters (see below), but the editors ‒ juiced up on Rupert’s kool-aid ‒ cannot resist a good old-fashioned front page

Yes, even that classic, elastic, all-purpose, sea-going three-word slogan gets another run and is put to a good secondary dog-whistle use.

As if thing aren’t already bad enough in the #CityofFear as it locks down in anticipation of the visigoth horde of visiting G20 dignitaries, the good burghers of Brisbane will have to contend to most of the city’s CBD being closed to ordinary folk, lest they wander into the view of the snout-in-trough great and good.

For months, the CuriouS Mell has been warning of anarcho-terror threats to the #CityofFear

Today the CuriouS Mell has been reinforced by the other titles in Murdoch’s stable – THE HUN, THE AGONIZERand THE DAILY TERROR– to remind us JUST HOW VULNERABLE Australia is to maritime attack by a ‘fleet’ of Russian naval vessels which are somewhere well away from us, but possibly heading into international waters ‘somewhere off Queensland’ by

Even the NORMALLY RELIABLE AUSTRALIAN got in on the act. With a news story, an opinion piece by Abbott’s court jester Greg Sheridan and an editorial.

If that doesn’t have the Russian admirals quaking into their seaboots, nothing will.

So is there a ‘sovereignty’ issue here?

If you were Bougainville, you might have reason to worry, but not us.

CALM DOWN! The fleet is not even close.

Territorial waters, or a territorial sea, as defined by the 1982 United Nations Convention on the Law of the Sea,[1] is a belt of coastal waters extending at most 12 nautical miles (22.2 km; 13.8 mi) from the baseline (usually the mean low-water mark) of a coastal state. The territorial sea is regarded as the sovereign territory of the state, although foreign ships (both military and civilian) are allowed innocent passage through it; this sovereignty also extends to the airspace over and seabed below. Adjustment of these boundaries is called, in international law, maritime delimitation.

The term “territorial waters” is also sometimes used informally to describe any area of water over which a state has jurisdiction, including internal waters, the contiguous zone, the exclusive economic zone and potentially the continental shelf.

(Yes, this is from Wikipedia.)

So really, what’s the problem?

Well, if Russia wants to sail its ships into our region it is free to do so. It has full rights in all international waters and also the right of  ‘innocent passage’ all the way into Australia’s territorial seas. This means they can come within 12 nautical miles of the mean low water mark.

That’s pretty close! But it is unlikely that the Russians will want to do that.

However, it would be very funny if they did. The Murdoch papers would go apeshit and they’d probably want to mount a Dunkirk style flotilla. Maybe Rupert could lead them out one of his superyachts. He could ram the Russian flagship and go down all guns blazing.

No doubt, Abbott would give him a state funeral and he might even get that knighthood that’s eluded him for sixty years.

Shirtfront! This is a shirtfront!

When our Prime Minister threatens to “shirtfront” the leader of another nation it should not be a surprise when that nation then decides to use its far superior naval power to return the gesture.

The alarmist headlines and Cold War rhetoric of the Murdoch papers is just stupid under the circumstances.

It is propaganda aimed at the readers of the Terrorgraph, the Hun, the CuriouS Mell and the Agonizer to keep them worried and alarmed.

It is the generation of what philosopher Zygmunt Bauman calls ‘liquid fear’. The generation of irrational scare tactics in order to hide the true purpose — social and political control of the population.

Given the Murdoch empire’s great love of our own dear leader, it is natural that they would generate a moral panic involving imaginary SOVIET MILITARY HARDWARE and that they would use a ‘hammer and sickle’ motif to illustrate their RED SCARE stories, even though the old Soviet regime has been dead and buried for more than a quarter of a century.

The RED FLAG is way more frightening than the RED, WHITE & BLUE of the Russian Federation and it has the added advantage of associating the approaching Russian fleet with communism and THE LEFT, which is, as we know so well, the real enemy of the News Corpse mercenaries.

THE CABIN ANTHRAX, MURPHY, N.C. (CT&P) – After analyzing the results of a new Pew Research Center poll conducted just last week, experts have concluded that the United States is not yet ready for a democratic form of government. The finding is particularly troubling considering the midterms are less than one week away.

“It looks as if we are in real trouble,” said Dr. Frank Black, who headed the Pew Research team. “There are just too many people out there who don’t possess enough innate intelligence to function in everyday life, much less determine their own fate by voting for their own representatives.”

“We found that only 32% of Americans believe that evolution is ‘due to natural processes such as natural selection,’ and fully one-third of Americans are so stupid that they utterly reject the theory of evolution and believe instead that humans ‘have existed in their present form since the beginning of time.’”

“And that is only one example,” continued Black. “The American public’s lack of basic scientific knowledge is mind-boggling.”

“Only 20% of Americans believe in the ‘Big Bang,’ only 50% believe in climate change, and an overwhelming number of Americans want to ban incoming flights from Africa because of the Ebola crisis when most American citizens have no fucking clue what a virus even is.”

“Hell,  do you realize that fully 40% of Americans think that they are going to be lifted up into heaven in some sort of Rapture event? It’s really depressing.”

“The state of affairs is equally miserable when it comes to progressive government policy. America has had to be dragged kicking and screaming into the 21st century as regards gay marriage, equal pay for women, immigration, and sane firearms policies.”

“Given the recent track record, whole swathes of the United States should really not be allowed to vote,” said Black. “The rise of the Tea Party to prominence in recent years should make that obvious. Take Texas and Florida for example. When a one state elects a dolt like Rick Perry and the other an ancient Aztec snake god as governor, we have real problems.”

Dr. Black suggested that since America was not yet ready for any type of representative government that possibly the best alternative would be some form of benign dictatorship.

“If we could get someone in the White House who would dissolve Congress and ratchet up public education to at least Third World standards, then that would be a good start,” said Black. “The money is there if we could just redirect it. Instead of invading Muslim countries every other week, we could use some of those trillions to teach our offspring some basic science, civics, and history. It will be a long, hard slog, but I think the future of North America depends on it. After all, do we really want half of our kids believing that we are being observed by aliens in UFO’s? I don’t think so.”

ASIO has more money and more opportunity to showcase their incompetence

ASIO’s showcase raid was on the Dirani family who  are Afghan-born Shiite Muslims. Why, then, was Mustafa Dirani being raided in connection with the IS, a Sunni group notorious for massacring as apostates any Shias who fall into its clutches?

How can we have an intelligence agency that hasn’t even a clue about the basics of what it’s doing. We accept the divisions between the followers of Jesus as doctrinal differences that need to be taken seriously. But  Muslims remain tarred with one brush and then differentiated according to temperament:  whether they’re wild or tame.

The NSW Police Commissioner said he was perplexed and any wonder why  his men had just raided Dirani and his friends on the basis that they supported a group that wanted to kill them.

Did ASIO, an organisation with an annual budget of nearly half a billion dollars, really think that Shiites would belong to an organisation dedicated to massacring Shiites? Or were they simply happy to let the Diranis be swept up in the hysteria that, resulted in extraordinary new powers for ASIO?

It’s hard to know which option is more disturbing.