With his approval ratings are tumbling and COVID cases soaring, Australia’s Prime Minister would rather talk about just about anything else, which is why he recently brought up the so-called ‘soiled pants at Maccas’ rumour during a radio interview, an internet meme that came to light in 2019. Maccas is Australian slang for McDonald’s. Just 9% of Australians are fully vaccinated, compared to over 48% in the United States. They’re currently in their third lockdown.

Source: Australia’s PM Says He Didn’t Sh*t His Pants At McDonald’s In 1997 | Crooks and Liars 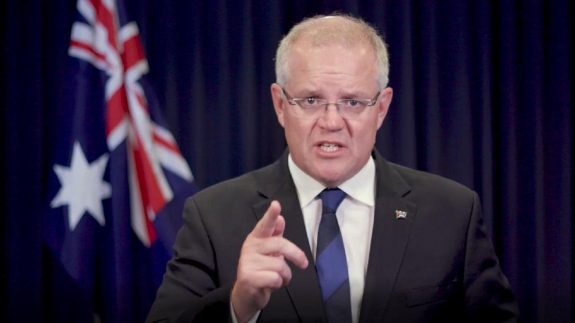 A certain literature – and to that, a good deal of ghastly celluloid – has been produced on the subject. All are, in essence, in violation of the United Nations Refugee Convention. No mention on the right to asylum is ever made; nor to the right not to be prejudiced against as an asylum seeker in terms of means of arrival. And that’s merely the start. In gazing at these amateurish compilations of self-entitled guff, one is left with the conclusion that no one involved in this process has ever consulted a human rights manual, let alone familiarised themselves with the hideous post-Second World War period. There was a time when the term Displaced Person was not entirely revolting.

Prime Minister Scott Morrison, the hardened advertising man of the government, has retreated into something he knows best: the shallow, bucket swilling call of the advert. This is interesting in a way: the same man condemned his opponents for doing something similar when they got on the anti-refugee video show. When Labor, then in government, introduced material to justify its “PNG solution” in July 2013, Morrison claimed that the party was “ramraiding the taxpayer’s ATM”. The then coalition opposition snortingly dismissed the effort by Labor as “propaganda”.

Shortened memories prevail. A two-minute video message is now ambling its way through 10 countries, though it will have to be translated, however accurately, on its crooked journey. “Make no mistake, if you attempt to come to Australia illegally by boat, you will not succeed.” Spare your pennies, insists Morrison. “So do not waste your money or risk your life, or anyone else’s life, for nothing.” Such is the awareness of a person who has never had to consider the throbbing, genuine feeling human rights conjures up in the breast of the oppressed.