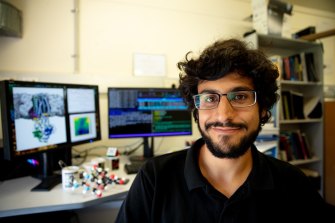 John Howard approached ultra-conservative religious sects for money and votes and struck oil in the flood of Pentacostalists to the Party. They could all spoke fast in toungues and felt blessed and a nation unto themselves.

Morrison’s investments certainly don’t favor a smarter or dignified economy, do they? Personally he doesn’t really  care how Australians “feel” does he? He has all those abstract numbers to tell him.

Scott Morrison stands apart from us and  feels “blessed”.

However, Morrison hates educated people as they are the ones who tend to see through him. They don’t seem to fit the demographic that votes for him. He’s cut research funding, casualized teachers, so much so they can’t get bank loans and are quitting their jobs. Only 1% of 150k tertiary teaching staff were offered tenure last year and at the same time they were found to have been underpaid and ripped off. A broken system it sure is!!

Stuart Robert canceled research funding for 9 projects that in fact had been accepted by the appropriate independent funding body. No explanation given other than it was the Minister’s perogative. No surprise to us however they all had something to do with Climate Change or were Humanities or Arts based.

For the last four years I’ve been learning how to use these powerful computers to simulate the motion of atoms inside the body to treat disease. These methods have gained a lot of attention during the pandemic and not many people are trained to use them. I’m happy with what I’ve learnt and the research I’ve produced. But in that time I’ve also learnt a lot about the truly broken system in which researchers are expected to work in Australia. This system has been ruthlessly attacked by the current government and I feel it is important I write down what it’s been like to be a young researcher.