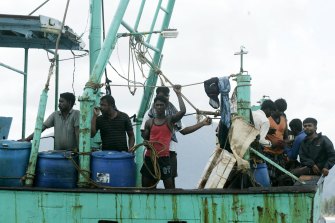 The Morrison Mad-Man’s Plan, Prizes for Detterance sinks Australia to lower depths of depravity. Rewards for “Keep Out” signage in Sri Lanka.

While Australia’s reluctance to meet its human rights obligations is not new, the “Zero Chance” short film competition for 2022 takes our reputation to a new and deeper level of moral depravity. It encourages Sri Lankan filmmakers to come up with videos that might deter their fellow citizens from seeking refuge in Australia via boat. Effectively, the competition proposes that every day Sri Lankans convince their neighbours to relinquish their human rights and win a digital SLR camera or a drone. The suggestion that those who have endured years of suffering may be deterred by a short film, is callous enough. The idea to recruit their fellow citizens to dissuade them from recognising their rights is morally repugnant.