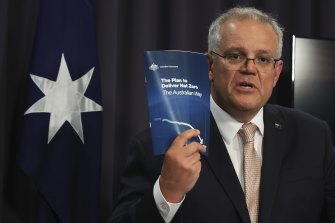 He scammed Biden. He stabbed Macron in the back. Now he’s trying to do us over slowly while trying to con the Cop26 nations while doing nothing. Yet, he dares call himself our Prime Minister. He’s White, a Christian, a liar and fudamentally a parasite. He’s been one since he graduated and he’s modelled himself on Trump who in turn admires all the authoritarian leaders.

The Prime Minister has changed one word in the government’s policy. Until this week, he’d pledged Australia to “reach net-zero, preferably by 2050”. The new policy omits the word “preferably”. And that one-word edit carries some remarkable implications. Not for the climate. Morrison’s new 126-page “plan” won’t actually cut an extra tonne of emissions from the atmosphere. As it says, it’s “based on existing policies”. Scott Morrison launched the government’s net-zero emissions plan, “The Australian Way” on Tuesday. Scott Morrison launching the government’s net-zero emissions plan, “The Australian Way” on Tuesday.Credit: Alex Ellinghausen It holds the possibility of serious action eventually, but the government’s new brochure offers nothing to accelerate decarbonisation of the existing economy or investment in the new. The Australian tech entrepreneur Mike Cannon-Brookes is investing billions in renewable energy. He read the “plan” and judged it “ridiculously embarrassing”: “I understand technology damn well. This isn’t a ‘technology-driven approach’. It’s inaction, misdirection and avoiding choices.”