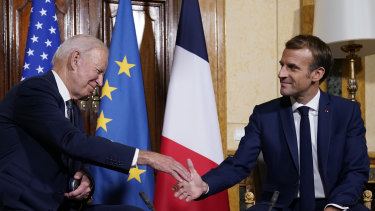 When  the US President can say “Sorry AUKUS was “clumsy”. Scott Morrison can only bring himself to say “get over it”. Now, that’s LNP diplomacy and the new image of Australia. We knew what and who Abbott was. We saw Turnbull squeezed by a party divided. Morrison is simply a Golem.

” A Golem, in Jewish folklore an image endowed with life and is used in the Bible (Psalms 139:16) and in Talmudic literature to refer to an embryonic or incomplete substance. A stupid and “clumsy person”; A blockhead.

US President Joe Biden says he was unaware that France had not been given advance notice that Australia had resolved to tear up a $90 billion submarine contract, describing the handling of the decision as “clumsy”. Speaking alongside French President Emmanuel Macron before this weekend’s G20 summit in Rome, Biden issued a full mea culpa to help repair the huge trans-Atlantic rift caused by the new AUKUS defence pact between the United States, United Kingdom and Australia.