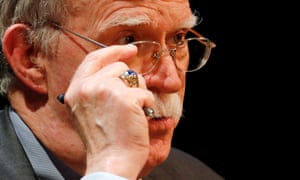 Bolton’s book, “The Room Where It Happened” will be a critical account of the Trump administration, according to the publisher.

Bolton “shows a president addicted to chaos, who embraced our enemies and spurned our friends, and was deeply suspicious of his own government”, according to Simon and Schuster.

Yesterday Trump told reporters that Bolton will have a “very strong criminal problem” if he publishes the memoir.

The Trump administration has asked a federal judge to block the publication of former security adviser John Bolton’s book, arguing that Bolton had breached a contract and would risk exposing classified information.

Bolton’s lawyer Charles Cooper has said that the administration’s efforts to block publication are “a transparent attempt to use national security as a pretext to censor Mr. Bolton, in violation of his constitutional rights to speak on matters of the utmost public import.”

The book is scheduled to publish later this month.