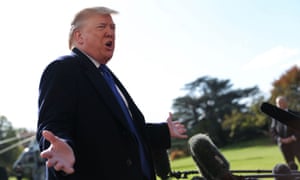 The anonymous author of a widely anticipated book on the Trump White House has described the US president as spiraling from crisis to crisis “like a 12-year-old in an air traffic control tower”, according to scathing extracts published by the Washington Post on Thursday.

The unnamed author, identified only as “a senior official in the Trump administration”, also says that colleagues considered resigning en masse in order to raise alarm about the president’s conduct, but ultimately decided against it, according to the Post.