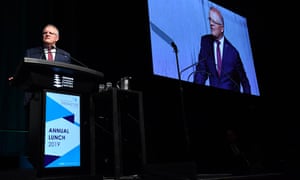 It takes some chutzpah to stand up with a straight face and deliver a speech foreshadowing a government crackdown on protest activity while in the same breath declaring that a new insidious form of progressivism is intent on denying the liberties of Australians.

via As he rails against activism, Scott Morrison is turning a bit sinister, a bit threatening | Katharine Murphy | Australia news | The Guardian