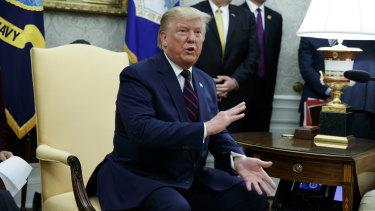 Ch9 has taken over The AGE and we get Goebellian banners like this thrust in our faces. !4,000 fact checked lies since Trump took offce and I suuggest that’s being kind and our Age declares an American cross between Hitler and Mussolini as being “Brutally Honest”. Ch9 is set on outdoing Murdoch Media it seems. Tomorrow we’ll see editorials the racining is suffering badly for the lack of abbottoirs and Morrisson really is a working classman. Australia we’d all be wastage if it weren’t foe the ABC. Walpole’s irony escapes us all. (ODT)

Taking all this into account – most especially, what this pattern means in terms of Trump governing as he promised to do when he campaigned in 2016 – Trump has been the most ruthlessly honest president in modern times.

Which is why his base loves him.

via The most ruthlessly honest president of modern times: a thousand days of Trump